Kansas receiver Daylon Charlot smiles as he puts on his helmet while running to a drills station during football practice on Wednesday, March 6, 2019 within the new indoor practice facility.

When Daylon Charlot left college football juggernaut Alabama in 2016, he had extensive on-field plans in store for his next stop.

The receiver from Patterson, La., didn’t anticipate it taking him long to become a prominent part of the offense at his new home, the University of Kansas.

But after one redshirt transfer year, followed by back-to-back seasons in which Charlot never grew into the type of impactful wideout he still believes he can be, the 6-foot, 193-pound senior who was once a four-star high school prospect in the Class of 2015 knows this is a come hell or high water type of year.

So is the previous coaching staff, which recruited Charlot successfully to Kansas but never was able to unleash him as a weapon in the passing attack.

Now when Charlot looks around at spring practices, he says he sees not only talent around him, but also an opportunity to finally work his way into a starring role with the Jayhawks. 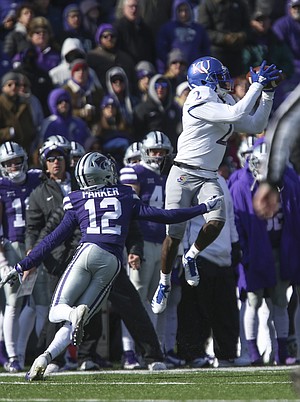 While making such declarations, Charlot doesn’t include any claims about needing to be the No. 1 option on offense or even the go-to target at his position.

No doubt humbled by the fashion in which the past couple of years turned out for him, Charlot quickly transitioned to a different subject after addressing how his upcoming final college football season could be substantially different for him individually.

“The new guys that came in, they’re going to help us a lot, too,” Charlot pointed out.

The additions he was sure to bring up are the two junior college transfers from Les Miles’ first KU recruiting class, Ezra Naylor and Andrew Parchment.

Charlot and other Jayhawks have raved about the 6-2, 185-pound Parchment’s speed, and they expect the 6-4, 210-pound Naylor to be a big-body target that will help the passing game.

“So we want those guys to make plays, too,” Charlot said, adding both Parchment and Naylor have shown off not only their football smarts this spring, but also their playmaking potential.

The Jayhawks will need their former Crimson Tide receiver, their transfers from Iowa Central Community College and others producing in order for the offense to truly take off.

Only seven KU players reached double digits in receptions in 2018. Three were seniors and one was currently suspended running back Pooka Williams (33 catches, 289 yards, two touchdowns).

According to Charlot, KU’s receiving corps got off to a strong start this spring. He credited the “energy” from assistants, such as the group’s position coach, Emmett Jones, for making that happen.

KU football supporters can get an early preview of the Jayhawks’ receivers, as well as the rest of the program’s first Miles-coached team, Saturday night at David Booth Kansas Memorial Stadium.

“We’re very excited. We feel like a lot of people will show up,” Charlot said of the spring game. “Everybody also wants to see how good we’re going to be this season, too.”

Before rapper Rick Ross takes the stage for a post-scrimmage performance, many of the eyes in the bleachers will focus on Charlot, trying to determine whether his breakthrough season is finally on the horizon.

KU’s spring game is scheduled to begin at 6 p.m. Saturday. It will be available to stream on ESPN+ and broadcasted locally and throughout the state on various cable platforms.

Charlot has shown the ability on a few occasions to make plays that others on the roster just are not making and maybe don't have the ability to make. He needs to become that consistent performer and take care of his body so he is on the field more.

Well we've all been witness to how a talented guy just can't fit into a certain system, but change that system, and they thrive. Example: Ryan Willis.

Hoping the same is true for Charlot under Miles.

This kid needs to learn one thing.....patience is a virtue. He could be a multiple national champion, but decided he didn't want to wait his turn at Alabama. All he did here was sit out a year, get switched to defense and now is still trying to show his skills. What a waste. His fault completely. Hopefully he can contribute this year but what a bad decision he made.