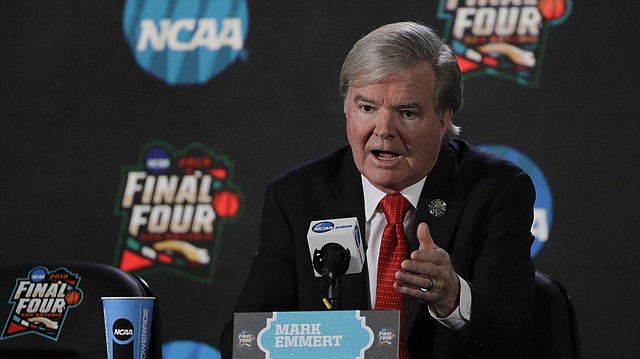 Emmert, who made the comments Thursday during a news conference for the NCAA’s Final Four basketball tournament in Minneapolis, Minn., said the NCAA has filed a request in a U.S. District Court in New York City for the FBI's evidence to be released so that the NCAA could use it in its own investigations into whether basketball programs caught in the scandal — including the University of Kansas — violated any NCAA rules.

The NCAA provided a transcript of Emmert's comments to the Journal-World after a reporter asked for an update on the NCAA's request for evidence.

“We petitioned, and we're going to continue to argue aggressively that they should provide that information so we can get to the facts, since there's so much interest, not just on our part, but across the country and knowing what really transpired there,” Emmert said, according to the transcript.

Emmert noted that the NCAA needed to file a request for the evidence because it is not automatically available. If the request is granted, the NCAA can then use the evidence as part of its own investigations into the recruiting scandals without needing to find the evidence on its own, which is a relatively new NCAA rule.

“I'm very excited to see that process move forward,” he said, referring to the request for evidence.

In a separate court filing in March, prosecutors representing the U.S. government in the case said they intended to oppose the release of the evidence, noting the NCAA had requested 24 exhibits of evidence that were not admitted into an October trial.

Lewis A. Kaplan, the federal judge overseeing the case, has not yet ruled on the NCAA’s request. Two more trials related to the scandal are scheduled for April and June.

During the trial, testimony focused on KU coach Bill Self’s relationship with government witness T.J. Gassnola. Gassnola, a former Adidas consultant, testified that he paid the families of players to steer them to KU, including $90,000 to the mother of former KU player Billy Preston and $2,500 to the guardian of current KU player Silvio De Sousa. Gassnola testified that he never told Self about the payments. Gassnola is awaiting sentencing in a separate but related federal case.

The defense in the case argued that the coaches, including Self and KU assistant coach Kurtis Townsend, were aware of the payments to players. Despite the argument, the jury found all three men guilty of defrauding universities, including KU, by providing money to players’ families to push them toward certain programs.

Evidence in the case the NCAA is pursuing would include the text message transcripts of Self and Townsend discussing recruiting with some of the men convicted in the case.