A standout on the gridiron first at Lawrence High, then KU and finally in the NFL, with the San Diego Chargers, Hadl returned to KU as an assistant football coach once his playing career concluded. As assistant head coach and offensive coordinator in 1981 he helped lead the Jayhawks to the Hall of Fame Bowl. In the mid-1980's he coached in the NFL and the USFL.

Hadl spent his post-football career with the Williams Fund, helping with various fundraising campaigns for the construction and renovation of KU athletics facilities.

"I remember watching San Diego Charger games with John at quarterback," first-year KU athletic director Jeff Long said in a release. "What a great talent, and so much fun to watch. I didn't have the pleasure of working with him at KU, but it didn't take me more than a few days to appreciate the impact John has had on this university and this athletics department. It seems like every alumnus and every donor I've met has mentioned his name. We owe John an enormous debt of gratitude for what he did for KU on the field and off." 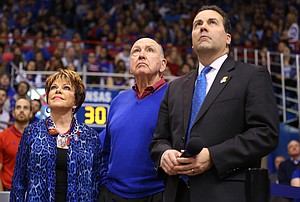 Kansas football legend John Hadl waits with his wife Diana and Kansas athletic director Sheahon Zenger before being brought out to be honored before the fieldhouse, Saturday, Jan. 23, 2016.

KU will honor Hadl at a private event Friday, Oct. 26, and again publicly at a ceremony the following day at KU’s home football game against TCU at David Booth Kansas Memorial Stadium.

Hadl’s name is up in the KU football Ring of Honor and he’s a member of the Kansas Athletics Hall of Fame. His No. 21 is one of three KU football numbers to be retired, along with Gale Sayers’ No. 48 and Ray Evans’ No. 42.

As a sophomore in 1959, in his first season of collegiate eligibility, Hadl led the NCAA in punting (45.6 yards per punt), and set KU records for the longest punt (94 yards, which still stands) and the longest interception return (98 yards, which stood until 2007).

But it was his junior and senior seasons when Hadl's versatility propelled him to excel both as a halfback and quarterback. With Hadl running the offense, the Jayhawks were ranked in the top 20 his junior and senior years, and finished the two-season span 14-5-2. He wrapped up his Kansas career leading his team to the program's first-ever bowl victory, a 33-7 decision over Rice in the 1961 Bluebonnet Bowl.

"As a student-athlete, as an alumnus and as a Williams Education Fund team member, John's contributions to Kansas Athletics and to the university are immeasurable," Matt Baty, KU senior associate athletics director and director of the Williams Education Fund, stated. "Our donors know of his athletics achievements, but the respect they have for him as a person has helped Kansas Athletics achieve a transformation through millions of dollars of construction and renovation."

Longtime KU donor Dana Anderson said he admired Hadl as an athlete before he got to know him through the Williams Fund.

“He inspired me to become involved in the (Anderson Family) Strength Center and the (Anderson Family) Football Complex. He had a magic way about him,” Anderson said. “He could open any door with anybody. People welcomed him even though they knew he was looking for money. He was what I call 'pleasantly persistent.' I wouldn't have been as committed if it hadn't been for John."

An inductee into the College Football Hall of Fame (1994), Hadl was the first KU player to be picked twice for All-America honors (1960 and 1961). He was also named the Most Valuable Player of both the East-West Shrine game and the College All-Star game after the 1961 season.

Hadl then enjoyed a successful 16-year career as a professional QB, most notably with the San Diego Chargers. A six-time Pro Bowler, he played in three American Football League Championship games and was named National Football Conference Player of the Year in 1973. He was named the 1971 National Football League Man of the Year, and is a member of the San Diego Chargers Hall of Fame.

All I have is a short thought.

Mr. Hadl - Thank you for your time, effort and commitment to the University. Rock Chalk

John Hadl would have been an outstanding head football coach at KU. He was the OC for Don Fambrough, and apparently did not get the opportunity because of alleged, unproven recruiting violations. He later served as an assistant coach for the Denver Broncos and helped tutor John Elway.

I was a student at Topeka High when Hadl was a senior at Lawrence High. He scored all 21 points for Lawrence during their win over the Trojans. I was in awe.

Are you seriously trying to sell your pathetic books on the message boards you hack? Make a comment and move along. What a joke.