Kansas football coaches and players knew headed into Big 12 play that opposing defenses would base their schemes around stopping freshman running back Pooka Williams.

Now, the Jayhawks have experienced what that looks and feels like.

A potentially explosive playmaker in the open field, Williams mostly got smothered by Baylor defenders this past Saturday, with the exception of one 72-yard burst down the right sideline in the third quarter.

Afterward, BU coach Matt Rhule stated how proud he was of the way the Bears’ defense handled KU’s star freshman, noting that Williams only gained 17 yards on his 13 other carries combined. 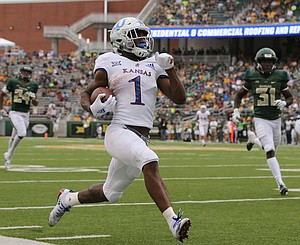 Kansas running back Pooka Williams Jr. (1) breaks away from Baylor for a 72-yard run during the first half of an NCAA college football game, Saturday, Sept. 22, 2018, in Waco, Texas.

“Yeah, we knew coming into the game that No. 1 was the heart and soul of their offense,” Baylor senior defensive end Greg Roberts said. “So it was a big emphasis in practice to really get after him.”

Two of Williams’ first four carries lost yardage. By the end of the defeat, two other rushes went backward, as well. Just five of his carries went for more than three yards.

KU head coach David Beaty said Monday during his "Hawk Talk" radio show that the 5-foot-10, 170-pound freshman from Louisiana still made valuable plays, even if only one was executed for a long gain.

“One of the things he did was he gave us some really tough, hard runs,” Beaty said.

The coach also thought Williams helped the offense with first-down carries that led to “favorable” yardage situations for extending drives.

Below are the running back’s rush attempts on first-down play calls:

• A six-yard run early in the first quarter to put KU at 2nd and 4. On the next play, Peyton Bender passed to Stephon Robinson for a first down.

• A three-yard run in the second quarter. Two plays later, Williams, on 3rd and 3, rushed for four yards and a first down.

• A seven-yard rush in the second quarter to open a two-minute drill drive. Two plays later, on 3rd and 1, Terrell Bernard stopped Williams in the backfield for a loss.

• Williams’ 72-yard chunk play in the third quarter came on a first down, too, and got KU inside Baylor’s 20-yard line for the only time in the game. Three plays later, Bender found Jeremiah Booker for KU’s only touchdown.

• Late in the third quarter, Williams rushed for two yards, but a facemask penalty provided a first down.

Reviewing the footage from the defeat, Beaty said, should help Williams and the rest of the offense better understand how critical it will be every week to get the young back (averaging a Big 12-best 125.7 rushing yards per game, as well as 8.0 yards per carry) in the best situations possible. The Baylor game was only Williams’ third as a Jayhawk, but it was the first in which he didn’t score a touchdown.

“That guy’s so dynamic,” Beaty said. “If we can just make sure we focus on the details around him with our steps, our departure angles and things that you really have to focus on when you’re playing Big 12 talent, you give that guy a chance to go to the house any time he has a crease.”

Obviously, KU (2-2 overall, 0-1 Big 12) needs its offensive linemen, tight ends and receivers on top of their blocking assignments for everything to click.

Armchair quarterback suggestions for the offense: - Start Carter Stanley - Don't put Pooka back on kickoffs, he's going to get hurt. - Try Pooka in the slot in addition to RB, get him the ball in space, or at least as a decoy to open things up - Utilize our other RBs more - Get the ball to a hot route (slant or tight end) just beyond the linebackers if the D is getting too much pressure

It just doesn't seem like we're utilizing the guys we have as best as possible.

You are spot on with all points although our coaches can’t figure this out.

Well said, Kenneth. I keep wondering why they never throw to Pooka even though we've been told that he has good hands.

Good comment Kenneth. Use all of our very talented backs to spread the wealth and reduce risk of injury. No Kerwin Bell!! Coach said you have to be careful with freshman running backs so let's be careful especially with O-State. This could be a telltale game for how our running backs are utilized, so turn them all loose!

You need the offensive line to create holes, not be pushed backward and clogging holes.

True. But, that is also why they created the Veer, which makes is easier on weak offensive lines. Sometimes I am surprised that coachs don't mix it up formations more.

I would use elements of the veer, triple, wildcat, air raid, option, west coast and not only take some heat off the line but confuse the hell out of the other teams defense. But, maybe getting the players to understand each formation is just too much.

If our online gets pushed backward tonight often, our qb should be further back.

If our o-line gets pushed backward too often, our qb should be further back!