Although he watched the entire second half of the Kansas football team’s home win over Rutgers from the sideline with coaches and reserves, senior quarterback Peyton Bender will keep his spot as the Jayhawks’ starting QB on Saturday at Baylor.

Head coach David Beaty stated immediately after KU’s 55-14 romp over Rutgers that he didn’t want to say who would start at QB the following week. He provided an update on Bender’s status Tuesday, during his weekly press conference.

However, Beaty also said Bender might man the spot for “one” play or “50” plays.

“We'll see how it goes,” the coach added.

“He's a guy that brings a certain skill set to the table that helps us in his role,” Beaty said after announcing Bender would start this week, too, “and then the same thing with Miles.” 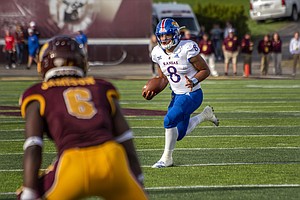 Kendrick played a distinctly backup role each of the first two games, before spending more time on the field against Rutgers than any other Kansas QB.

A 5-foot-10, 200-poundsophomore transfer from College of San Mateo (Calif.), Kendrick threw a touchdown pass to Jeremiah Booker and rushed for another score versus RU (1-2). Kendrick has completed 9 of 15 passes for 93 yards with one touchdown and no interceptions this season. He also has 12 carries for 43 yards and a TD. Beaty made it clear that the sophomore will remain a part of KU's offensive game plan each week.

While playing on five possessions in the first half against Rutgers, Bender completed 7 of 11 passes for 68 yards, without suffering an interception or a sack. On the season, the 6-1, 205-pound senior has completed 59.7 percent of his 72 throws for 385 yards and three touchdowns, with no picks.

In terms of playing both quarterbacks each week, Beaty said it’s been “so far so good” for the Jayhawks (2-1).

“It's really been right along the line of what we had planned. We'll continue to tweak that plan if we need to,” KU’s fourth-year head coach went on.

Kendrick, who will experience his first Big 12 game on Saturday, in Waco, Texas, has improved enough since the conclusion of preseason camp, Beaty said, to take on a larger role within the offense. With in-game repetitions, the coach explained, Kendrick gained more trust.

“And he's really continuing to develop,” Beaty elaborated. “You can see him start to get a lot more comfortable there and that's really been the plan. The plan isn't going to change for us. We have an idea how we want to approach it.”

Although his playing time decreased in KU’s win over Rutgers, Bender said he doesn’t intend to let the team’s two-QB approach impact his mindset.

“I think it was just good reps for me, good experience for me,” the sophomore said. “The more tape I can watch of myself in that situation, in those situations, the better I can be. As long as I get those opportunities I’m going to take advantage of them in the film room after and just try to get myself better.”

The question is who moves the offense better, Bender or Kendrick? I don't mind the occasional pick or fumble if the offense is putting points on the board every week!

Bender can't even make the simple throws. I can't tell you how many times he's overthrown open receivers these past few weeks. And I'm not saying Kendricks is a great down-field thrower because I don't think that's the case, but he at least hit open receivers last week and he's a threat with his legs - unlike Bender. And the offense just seemed to flow with him better than Bender.

But it's fine, it's questionable decisions like these that will prevent Beaty from getting a 5th year.

Bender can't make simple throws? That's just not factually accurate. Bender was 8/12 last game... Miles was 6/11. Bender is more accurate period. Peyton was also 17/26 the week before, so I'm not sure where this notion of him "not making throws" is coming from. Every QB including Tom Brady occasionally misses throws.. but its outrageous to flat lie about Bender. I can understand wanting Miles over him but the reasoning here is completely flawed. The situation has been handled well and I see no reason to change until one QB is far and away the better choice night in and night out.

Let's not forget the dropped TD pass (from Bender) by our best receiver Sims vs Nicholls State in Week 1. I think it is universally agreed that Bender is the more accurate passer, but Kendrick is the more versatile QB due to his mobility (avoid sacks) and ability as a runner.

Was thinking the same thing.

Bender has only thrown accurately on 58% of his completions.

Not gonna argue this point beyond those statistical facts.

That seems odd given the completion rates for each, but certainly don't know enough to argue one way or another. My guess is the coaches are tracking this sort of stuff through practice and games as well.

Do they have a stat for the incompletions?

Bryson, what kind of BS stat are you pulling out of your a55. If Miles is 9 for 15 how can he be at 100% accuracy? And this from Pro Football Focus? You know this is college right.

Jack -- what is sticking in everyone's mind is that Bender overthrew his receiver 2 possessions in a row on Saturday. Both were corner routes in the end zone to open receivers. That only accounts for 2 incomplete passes, but they were wide open and they were not difficult throws.

Those were big and I also remember one where Bender threw behind Pooka in the flat and spun him around. He still managed to get up field for a gain but that’s a loss with anyone else on that throw.

Was Beaty watching the same game that I was? Kendricks moved the team better than Bender. Agree with Dillon, I saw way too many errant throws by Bender.

I predict Bender will start, he will play poorly, then Beaty will put in Kendricks.

And then Beaty will say mid-week he will start Bender, Bender will play poorly, and then he will put in Kendricks - or maybe some other quarterback.

The small amount of goodwill that Beaty built up with me with the last two victories just evaporates again when I read stories like this...

And yup, this type of stuff will eventually get Beaty fired.

Obviously you weren't watching the game. Beaty himself said that Rutgers defense was better suited for Kendrick's skill sets which I why they played him so much. Again, where is this notion of "way too many errant throws" coming from? He had a better percentage than Miles and they threw the same amount of passes. Bender has been a good QB thus far for Kansas. He's completing over 60% of his passes, moving the team and limiting turnovers. This is simply a matter of you guys wanting to see the shiny new toy so you talk down Bender. If Miles is the better QB there certainly isn't overwhelming evidence to back that claim up.

Look at Baylor defense. People are running on them which makes Kendrick a better fit but I’m ok with Bender starting but give him a short leash.

Bryan, if you're going to keep touting someone you should at least learn his name. It's Kendrick, not Kendricks.

You shouldn’t be able to criticize the coach, staff or players if you can’t even spell their names right.

Guess I should have read down a little more before I posted.

I am not concerned. He may start but i don't think that means much. Maybe he wants Baylor to think we are going to play air raid. Maybe we will. Maybe Bender will play one set of downs. Who knows. This time around the QB rotation has more to do with what we are trying to do. In the past it was trying to find someone who could connect with his receivers, or so it seemed.

OK - ESPN wrote an article. Let's not white-wash the Sistine Chapel and paint the KU logo on the ceiling quite yet.

We are 2-1........with the loss against the Louisiana School for Blind and Sickly Girls.

I appreciate the 2 wins, but let's not pretend at this point that we are legit. If we win against Baylor and at least play tough against OSU, then maybe we can call ourselves legit.

Subject to change but 2-1 IS legit. I double checked the standings to confirm my suspicions and it turns out the games against Central Michigan and Rutgers, two college football teams in the same division we are in, counts towards our record.

You'll find Central Michigan at 118th and Rutgers at 110th. Thus my point.

Dane there's way too much ill will toward the coaching staff to let a couple victories get in the way.

The teams on the schedule so far are by far the worst of the bunch, and by quite a bit. Those that jumped on the band wagon last week, will just as quickly jump off if we don't win more.

I've never been a fan of the two QB approach, but it seems to be working for us right now, and if that means Baylor has to spend more time game planning to stop us, I'm all in.

Miles shows a lot of promise but I don’t believe he is ready to start. His wheels give the offense some nice options but it will be at the expense of the passing game until he can learn to find an open receiver. I suspect in order to do that they will have to open up the passing playbook. His play in the first half was an integral part of the win but in the third quarter when we had a comfortable lead he clearly looked like a backup. That said, I’m encouraged and excited we have him for the next three years but I can see why Bender eventually got the starting job.

What have you seen PB7 do that shows he was deserving of starting but haven't seen MK8 do?

Throw the ball where nobody can catch it? Yeah MK8 hasn't done that.

Peyton's Confidence must be at an all time high! Head Coach David states "you are the Starter"! However, you might only play 1 down? You have got to be kidding me, Bender deserves better than this, 1 or 2 Series minimum.

I'm not sure which QB is better all around; however, I'll be curious this week to watch the quick outs to the WR. Against Rutgers in particular the WR would catch the ball and be able to turn and avoid the stopped CB for a 5-7 yard gain. I think the measure of the QB will be if they can still get those out there to get those 5-7 yards. If those are losses of 1-2 yards or short gains, with a mix of dropped or interceptions, we'll really understand the arm strength of the QB.

It'll be an interesting week for sure for the evaluation of the QBs.

According to a Baylor link, provided earlier this week by a poster, they are nervous about the possibility of a KU upset. The article suggests that a loss to KU would be somewhat equivalent to Napoleon's defeat at Waterloo. None-the-less, the prognostication was BU 31-17. The article basically said the football talent still doesn't measure up to them, and that KU is still a weak team.

This weekend will validate or discredit the ESPN article, and as for the Baylor article, we shall see.

I just want to see our kids win!

What i am looking for to determine how legit we are is resiliency, toughness, physical and mental. There's a drive in the game below where KU slugs it out with OU but we prevail with a 22 play drive.