‘Do you think I can play or not?’: Once disregarded, QB Todd Reesing joining KU Ring of Honor

Back when he was a high schooler at Lake Travis, in Austin, Texas, Todd Reesing had a difficult time convincing college football coaches he could play quarterback for them.

“Well, we want to see you throw in person.”

“Your arm’s not that strong.”

Confident nonetheless, Reesing told himself: “Yeah, I know that. But do you think I can play or not?”

Fortunately for the University of Kansas football program, Mark Mangino thought he could. 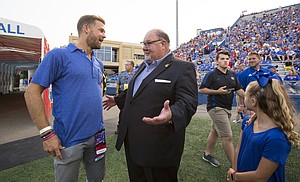 Speaking with reporters Friday inside Anderson Family Football Complex, on the eve of his name going up inside David Booth Kansas Memorial Stadium on the Ring of Honor, the now legendary Jayhawk recalled his first visit to the Sunflower State.

The recruiting trip actually brought him roughly 90 miles west of Lawrence, to Manhattan. Before coach Bill Snyder briefly retired, Kansas State became the first program to offer Reesing a scholarship, so he went to check out the Wildcats’ facilities and meet their coaches and players.

It so happened that before he ventured north from Texas Reesing also sent, through the help of several connections, some video highlights to then-KU coach Mangino. While Reesing was in Manhattan, he recollected, Mangino reached out to him and invited him to visit KU.

“I came in and met with Coach Mangino and he actually offered me that day on the spot,” Reesing remembered.

“I think that was kind of really what sold me,” he admitted. “Him having that confidence regardless of what my size was.”

When KU announced this past summer Reesing would join its Ring of Honor, Mangino was one of the first people to call the former QB, who now works for Dimensional Fund Advisors, in his hometown of Austin, Texas.

Presently more than a decade removed from helping KU improbably win the 2008 Orange Bowl to cap his sophomore season, Reesing thinks the entire recruiting process leading up to his decision to sign with Kansas ended up doubling as his personal fuel.

“I think I had a chip on my shoulder for a lot of reasons. Not being recruited, wanting to prove people wrong,” Reesing said. “But more than anything I just wanted to win.” 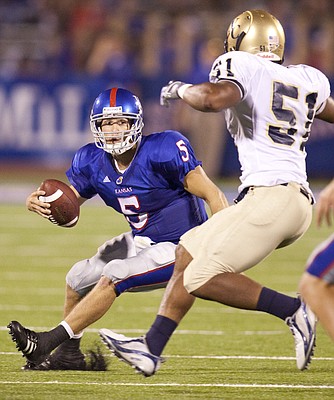 Current KU head coach David Beaty, a receivers coach on Mangino’s staff during Reesing’s final two seasons, had the honor of revealing to the program’s wildly successful QB that his name will be on permanent display inside the home of KU football, a disclosure Reesing described as “breathtaking.”

Beaty said he still brings up Reesing as an example while addressing his Jayhawks.

“Todd is a guy that has exemplified really kind of what it means to be a great Kansas football player. And that's just a hard-nosed, blue-collar, underestimate you and I'm not going to worry about that, I'm going to play with a chip that is only driven by me being better and me being better for Kansas,” Beaty said. “And that's the thing I always loved about Todd, he was always about our team.”

Reesing’s competitive nature, the coach added, made him unique.

“I mean, we used to go throw the ball around on Friday for about five minutes and he would go play receiver every week,” Beaty related. “And, man, he would get pissed if he didn't get open and make the catch. He's just a competitive dude. He really is. The really high-level ones, they’re like that.”

According to Reesing, his advice to current KU players includes taking pride in the opportunity in front of them.

“That’s not something that you should take for granted. I think they all know how much of a privilege it is to play college sports and not a lot of people get to do it,” Reesing shared. “So I think you take that and the fact that you get to go out and play the sport you love. I think that more than anything is why you do it. … You put so much time and effort into it. You spend the better part of your year doing things that are not that much fun. Like, ‘Do I really want to go squat in the weight room?’ ‘No.’ But I have to because I want to play football.

“There’s a lot of tradeoffs, so when you get those opportunities to play,” he said, “you want to put yourself in the best position to win.”

During Reesing’s three full seasons as a starter, KU went 25-13 and won both the Orange Bowl and Insight Bowl.

The article mentions that Reesing works for Dimensional Fund Advisors in Austin. Google it to find out who the co-founder of that company is. Might not surprise you.

is the old saying, it's not what you know but who you know applicable here?

Why do you seem to be implying that Reesing wouldn't have this job if the company was owned by someone else?

Reesing is an inteliigent person. He was a finance & economics major at KU and he was named to the Big 12's First Team All-Academic squad THREE times.

Why do you seem to be implying that I'm implying that Reesing wouldn't have have this job if the company was owned by someone else.

I'm saying he had connections.

Get off your soapbox.

Let’s get Mangino back and let Reesing coordinate the offense.

Two realities will be helpful here: 1. Mangino will not be head coach at Kansas ever again. 2. A great quarterback does not an offensive coordinator make.

Just because most A is B does not imply that all (or even most) of B is A. Draw it out on a Venn diagram.

Todd shows up at KU watch parties in Austin fairly frequently. Several of us try to make sure he pays for nothing. He may well make more money than I do now, but I don't care. Mario Chalmers and Todd Reesing don't pay for a beer in my presence.

I'm surprised it has taken this long to put Reesing in the Ring of Honor. Congrats to Todd...Very deserving.

Hey, Colorado and Nebraska!...…..Todd Reesing is on the stadium wall now, not on the field. C'mon back to the Big 12 and try again!

Always thought this bright young man belonged in the KU coaching staff. Not too late. I think the competitive fire he has will work as a coach, too.