Mount Pleasant, Mich. — One man and one result might not prove capable of changing a program’s fortunes. But for one sunny Saturday afternoon at Kelly/Shorts Stadium the Kansas football team, losers of a major college football record 46 consecutive road losses, finally left an opponent’s stadium victorious. And it seemed one new Jayhawk in particular deserved as much credit as any.

Many KU players on offense, defense and special teams did their parts in exorcising the roadkill demons, but freshman running back Pooka Williams, in his college debut, ignited it all in the third quarter with a pair of highlight touchdown rushes, paving the way for a 31-7 Kansas victory over Central Michigan.

Starting quarterback Peyton Bender said after Williams exploded for 125 rushing yards and two scores that he and other members of the offense learned the freshman, who sat out in Week 1 for an undisclosed non-disciplinary reason, would play during Saturday’s breakfast at the team hotel.

“Everyone just had a little smirk on their face, like, ‘Let’s see what he can do,’” Bender related, still wearing a grin. “We saw all fall camp. It was no surprise that he did that today.” 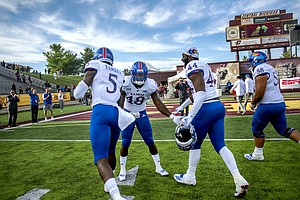 Listed at 5-foot-10 and 170 pounds, the freshman sensation from Marrero, La., gave a preview of his abilities early in the first half, even running for 7 yards on the first offensive play for KU (1-1), but completely unleashed them after intermission.

The second half got off to a strange start, and not only because KU led on the road entering a third quarter. On the second-half kickoff a CMU returner who didn’t actually end up fielding Liam Jones’ kickoff called for a fair catch. The Chippewas (1-1) couldn’t return the fielded kick as a result, nor were they allowed to open the drive at the 25-yard line, either, as a new NCAA rule allows on kickoff fair catches.

On CMU’s first play from scrimmage, quarterback Tony Poljan found wide receiver Brandon Childress for a 16-yard reception over the middle, but the receiver lost the ball as KU senior cornerback Shak Taylor hit him. Junior nickelback Bryce Torneden emerged from a scrum with the football, and the Jayhawks got to start their first offensive possession of the second half 24 yards from the goal line.

However, after a 3-yard rush by Dom Williams, two straight incompletions from Bender meant KU settled for a field goal. And on a windy afternoon in central Michigan senior kicker Gabriel Rui’s 39-yard attempt from the right hash missed wide left, eliminating the threat of KU immediately creating some true separation.

While such a series of events seemed eerily similar to countless disastrous stretches that played out for the Jayhawks over the past several years, when road game after road game ended in defeat. This one was different. This time KU had Pooka Williams.

After the Jayhawks opened the third quarter with a dud of a series, each of their next two possessions concluded with the freshman speeding and juking his way to long touchdown runs in front of a crowd of 18,127.

After his fourth victory as KU’s head coach and, obviously, his first on the road, David Beaty spoke highly of many of his players, but admitted Pooka Williams’ touchdown runs of 20 and 41 yards in the opening minutes of the third quarter seemed to make all the difference. 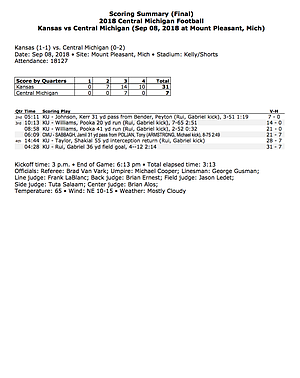 “Those are two plays that you can’t take out and say, ‘Yeah, it wasn’t no big deal,’ because it was,” Beaty said. “I think a guy that’s that explosive that can do the things he can do he can change games. A single guy can make a difference a lot of times. I don’t know that he can take you single-handedly to new heights all by himself, but I think he certainly can get it started and make guys around him better.”

KU’s defense got off to a strong start at CMU, stifling the home team to the tune of one 1st down and 3.0 yards per play.

Senior linebacker Keith Loneker Jr. had five total tackles by the break, including a key 7-yard sack of Chippewas quarterback Tony Poljan on a 3rd-and-3 play midway through the second quarter.

Even so, redshirt senior linebacker Joe Dineen, who led KU with 14 total tackles and registered the first interception of his college career, pointed to Pooka Williams as an inspiration for the defense, which picked off four Poljan passes in the second half.

“He’s unreal. He really is,” Dineen said of the new starter from Louisiana. “That run he had, you watch him run and you’re like, ‘There’s no way he’s a true freshman.’ We’ve got three or four more years with him here,” a grinning Dineen added. “He’s insane. He’s so good.”

KU’s fourth TD of its first road win since Sept. 12, 2009, at UTEP, came in the opening seconds of the fourth quarter, as senior corner Taylor stole a Poljan pass out of the air and raced 55 yards the other direction for a pick-six.

“You feed off of each other and when you get a guy like Pooka,” Dineen said, “that can make things happen all over the field it really picks us up and motivates us to get going. It’s awesome. It really is.”

Perpetual road losers, the Jayhawks entered the visitors’ locker room at halftime up 7-0, with a 151-60 advantage in total yardage, thanks to the help of 40 rushing yards by Pooka Williams and three receptions by Kerr Johnson for 48 yards and a touchdown.

By the time the Jayhawks ran off the turf celebrating the program’s first successful trip to an opposing venue since Mark Mangino was the head coach and Todd Reesing the quarterback, Kansas outgained CMU 361-280 in total yards and benefited greatly from drive-ending interceptions from Taylor, Dineen, Ricky Thomas and Jeremiah McCullough, as well as Torneden’s fumble recovery. A late Denzel Feaster recovery of a Jonathan Ward muffed punt gave KU a commanding 6-0 advantage in takeaways.

“Shak obviously made a great play,” Dineen said. “We had a lot of guys out there flying around, and whenever you get a lot of guys to the football good things are going to happen. Props to all those DBs. They really played well.”

“I think I said it before, there’s times when they lift us up,” Beaty said, his voice beginning to crack as he fought back tears, as he pointed toward Dineen nearby.

Today Pooka made it fun to watch KU football again!

Hear, hear!!! It's been a LONG time since I've had so much fun at a KU game. So glad I made the trip!

Just FYI, despite this article saying the 46-game road losing streak was a college football record, ESPN's article says it was the SECOND longest. Idaho State once lost 48.

Good point. In other articles I have since read it's a bit more specific and those support your comment. Thanks.

It says it's a "major college" record. I don't believe Idaho State qualifies in that category.

Yes, I didn't think about the dividing line for "major" and "all others" being that major means "FBS." Maybe it should have been worded that way. Then simpletons like me wouldn't be so easily confused. :)

I thought Pooka Williams, Jr., also runs what I call "loosely." When that defender grabbed his arm he didn't stiffen his body and thus lose control of his body. Instead, he stayed loose, allowed the defender's grab to twist his body while he slid away from him.

I'm torn, I'm glad they won but it means Beatty gets one more week. And if we beat Rutgers he may get the rest of the season. I am puling for the players. I think this run first metality will pay off. I hope Pooka Williams stays healthy.