With Marcus Garrett starting the second half in place of Quentin Grimes and Udoka Azubuike back on the floor after playing just six minutes and picking up two fouls in the first half, Kansas looked a lot more like Kansas in the final 20 minutes.

Three quick baskets brought he partisan-KU crowd into the action and the Jayhawks (4-0) went on to erase a nine-point halftime deficit in the first five minutes of the second half.

While better effort, energy and execution played a huge part in the Jayhawks’ 22-0 run that spanned 9:15 to open the second half, the onslaught was fueled by a greater sense of urgency on defense. 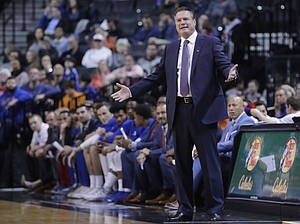 Active hands turned into steals. The Jayhawks got into the passing lanes and challenged every Marquette pass. And Kansas dominated the glass and swiped all 10 Marquette misses in the devastating run. Freshman point guard Devon Dotson (10 points, four assists, three steals) sparked a lot of it.

It wasn’t just the second half, which KU won 39-21, that featured noteworthy runs.

Kansas responded to an early 8-5 deficit with an 11-0 run and watched Vick heat up in the process. After opening the game trading 3-pointers with Marquette star Markus Howard (18 points, 6-of-23 shooting), Vick (16 points on 6-of-12 shooting) hit two more triples during the 11-0 run and led Kansas with 11 points at halftime.

The Jayhawks and Golden Eagles opened the game combining to make 10 of their first 14 3-point attempts, bringing a wide-open, offensive onslaught feel to the floor.

Marquette (3-2) hit 7-of-11 from 3-point range to open the game, many of them coming during a 15-4 run that put the Golden Eagles back on top, 23-22 with 10 minutes to play in the first half. Marquette finished 14-of-31 from 3-point range, just four off the record for most 3-pointers made in a game against Kansas, most recently set by Villanova in last year’s Final Four.

It marked the third consecutive game where KU struggled to defend the 3-point shot. But the Jayhawks survived and will play No. 5 Tennessee at approximately 8 p.m. Friday for the NIT Season Tip-Off title. 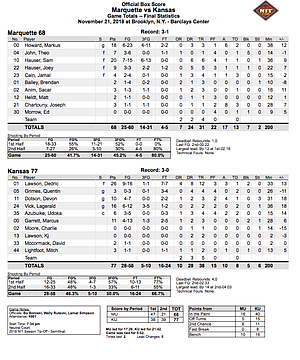 While today technically will be an off day for the Jayhawks, don’t expect Self to let his players loose in the city.

In addition to watching film and going over the scouting report for Friday’s 8 p.m. game with No. 5 Tennessee, the Jayhawks will do their best to stay off their feet and rest their bodies in order to be able to play two games in three days.

• The game turned when: Kansas came out with more energy to start the second half.

Junior center Udoka Azubuike was critical during the team’s run to start the second half after playing just six minutes in the first half due to foul trouble. He abused Marquette’s undersized post presence for much of the time he was on the court.

Vick drilled a trio of 3-pointers in the first half, including a triple on KU’s first offensive possession. Later in the first half, Vick then had a stretch where he hit back-to-back long balls to add to the Jayhawks’ early lead.

This is Vick's world, we are just living in it #kubball pic.twitter.com/cjIvfhaFwS

• Defensive highlight: Early in the first half, freshman Devon Dotson made an impressive play on the defensive end.

Dotson poked the ball away from a Marquette player around the perimeter. Dotson then fought for the loose ball the length of the court, while somehow staying on his feet. He capped the sequence with a layup on the other end to give Kansas an 11-8 advantage with 16:01 left in the first half.

Dotson with the steal and bucket. #kubball pic.twitter.com/HYB9ZJRygk

• Up next: Kansas will take on No. 5 Tennessee in the finals of the NIT Season Tip-Off at 8 p.m. Friday.

In the first half, and especially in the last 11 minutes, Kansas was just flat-out sorry on defense. They pretty much let Marquette do whatever they wanted - no effort, no intensity, nothing.

In the second half, a totally different Kansas team took the floor. That first nine minutes of the second half was about as perfect a nine minutes as I have ever seen Kansas play. They guarded, they challenged shots, they snatched the rebounds, they showed emotion and intensity - it was night-and-day! I am proud of the Jayhawks for getting it together, toughening up, and working together to shut Marquette down.

Come Friday night, I hope KU will put together a full 40 minutes when they take on UT. It's going to take a full 40 minutes' effort to beat this Vols team; Rick Barnes has built a monster in Knoxville!

Dotson is our floor general. He will be this team's catalyst. We are so much productive when we attack through his drives, instead of the perimeter rotation passing (so predictable and prone to TO). I'm glad to see Garrett's offensive attempts, but he has to develop awareness: use screens, drive and pass to bigs, push the ball higher when finishing off the board (most of them came short); those misses could've been easy buckets by bigs. Lawson should keep attacking the basket. His jumpers are going to be one of our best offensive weapon, in addition to his passing (and the only one who really understands pick-and-roll). Udoka indeed helped 2nd half rally, hopefully he knows how to avoid travelling in next games. Great win, nevertheless. Rock Chalk!

Lawson with a quite double, double. He will be our star this year. Dok and Garrett combined for 25% from the line. I though they were both going to work on their shot this summer? With Dok out late, you could see Marquette looking to foul Garrett as soon as he had the ball.