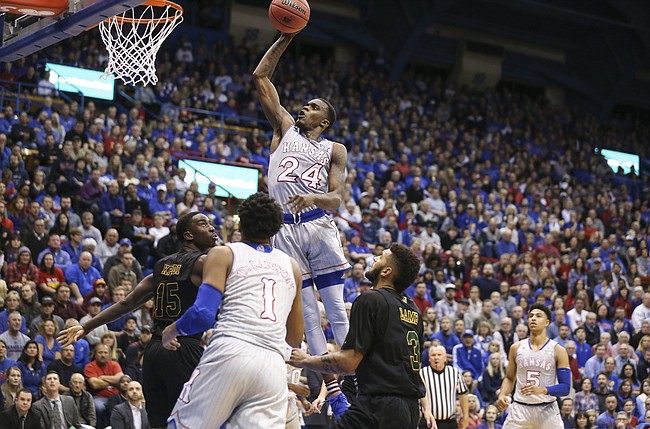 Kansas guard Lagerald Vick (24) soars in for a dunk against Vermont during the first half, Monday, Nov. 12, 2018 at Allen Fieldhouse.

After a slow start, No. 2 Kansas did enough in the second half to finish off an 84-68 win over Vermont in the home opener.

The Catamounts were in control for much of the first half, draining several shots from long range to give the Jayhawks an early scare. KU (2-0) responded, though, as freshman Quentin Grimes netted a pair of buckets in the final minute of the first half to reclaim the advantage for the hosts.

Kansas maintained that momentum to start the second half, making enough plays to keep Vermont out of it. Senior Lagerald Vick led the way for the Jayhawks, finishing with a career-high 32 points on 12 of 14 shooting. Junior Udoka Azubuike added 23 points, going 10-for-16 from the floor.

• The game turned when: Kansas got the crowd into it with a run during the second half.

Vermont kept the fans quiet during the first half of the first regular-season game in Allen Fieldhouse. The Jayhawks brought everyone to their feet early in the second half, as Azubuike threw down consecutive dunks and Vick hit a jumper in transition to stretch Kansas’ lead to double digits.

At one point, Vick scored 11 consecutive points for Kansas between the 14:17 mark and the 11:20 mark in the second half. Over that span, Vick hit three consecutive triples and fed of the energy from the fans.

• Offensive highlight: Vick was a walking highlight in the home opener, especially in the first half.

Vick opened the game with back-to-back triples, including a transition 3-pointer with no hesitation. Kansas turned to a small-ball lineup for a brief moment in the first half, and Vick took advantage by attacking the rim due to the fact that there was more space on the court.

With 9:21 left in the first half, Vick cut through the lane and appeared to have layup on his mind until he got near the rim with ease. Vick finished things off with a viscous dunk against the Catamounts.

Vick checks back in and immediately throws it down #KUbball pic.twitter.com/XqyHMk3xkO

Moments later, Vick buried another triple from the left wing to trim the deficit some more. Vick scored 16 points in the first half alone, shooting 6 of 7 from the field. He notched four 3-pointers in the first 20 minutes of action.

• Defensive highlight: Freshman Devon Dotson took matters into his own hands early in the second half.

Following a turnover by Grimes, Dotson elected to defend his man the length of the court. Dotson swiped the ball away near midcourt and netted a layup on the other end. It gave Kansas its largest lead at the time, which forced Vermont to call a timeout.

Devon Dotson gives #KUbball a 6-point lead with a steal and layup. pic.twitter.com/mY0nQ9CNWP

• Key stat: Vick hit all eight of his 3-pointers in the win over Vermont.

It matched the most he has hit in a single game in his career, as also did so against Washington last year. Vick also set the team record for most 3-pointers in a game without a miss with his 8-for-8 showing from long range.

As a result, Vick finished with a career-high 32 points. His previous career-best outing was when he scored 28 points against Washington.

Not a great team performance but good enough considering it's the second game of the year. Lots of time to get better. Vick was in the zone.

wow, that was the Vick and Dok show. I am happy to see different players can carry us on any given night. Dedric will be fine.

Lagerald may never go 8 for 8 from behind the arc again in his career but after losing Devonte, Svi and Malik, it was nice to see.

Seeing as how no other KU player has gone 8 for 8 from three, it is a pretty goddbet he wont do it again.

Glad to see Vick's 3s falling. He released the ball without side spin, which he normally does. I guess he has perfected his 3! We're back in 3-pt business, baby!!!