KU returns to Final Four for first time since 2012

Kansas guard Malik Newman (14) floats in to the bucket against Duke forward Javin DeLaurier (12) during the second half, Sunday, March 25, 2018 at CenturyLink Center in Omaha, Neb.

Omaha, Neb. — It would be next to impossible to take complete inventory of all of the celebratory moments that followed top-seeded Kansas' 85-81, overtime victory over second-seeded Duke at CenturyLink Center on Sunday night.

There were almost as many memorable postgame moments as there were those that transpired on the floor during a wild and crazy Elite Eight clash between two of college basketball's most storied and dominant programs.

Lagerald Vick hopping on the scorer's table as soon as the final horn sounded. Bill Self pumping both fists in the air on the KU sideline so hard that he almost fell backwards. Devonte’ Graham breaking down in tears with his mother and grandma and then hustling up the ladder to be the first Jayhawk to get a piece of the net. Silvio De Sousa dumping the red and blue Powerade confetti on his teammates who were holding the regional championship trophy on the stage at midcourt. Udoka Azubuike moving the Jayhawks into the next round on the big bracket.

And, of course, hundreds of screaming Kansas fans living it up and partying in the moment at a louder volume than the noise they delivered during KU's thrilling victory.

But when the confetti stopped falling and the band stopped blaring, the Jayhawks were more than happy to relive all of the moments on the floor — hard-nosed, nasty, that led them back to the Final Four for the first time since 2012 and the third time in Bill Self's 15 seasons at Kansas. 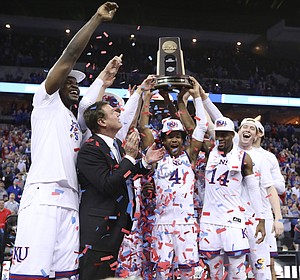 “It still feels like I'm living in a dream right now,” said Kansas sophomore Malik Newman after continuing his scorching postseason run with 32 points in 44 minutes, including five 3-pointers and an 11-of-12 clip at the free-throw line. “But I see us cutting down these nets and we've got the trophy, so I know it's real. But I still feel like I'm in a dream.”

That might well have described the way fans of high-level college basketball would have dubbed their feelings during Sunday's so-good-we-might-as-well-play-five-more-minutes affair.

The Jayhawks (31-7) and Blue Devils (29-8) both played some of their best basketball of the season and rarely were able to work their way into anything close to resembling a comfort zone.

Duke led 36-33 at the break and Kansas led for most of the second half. But with the Jayhawks tightening up just a smidge late, Duke took a three-point lead into the final minute.

At the time, it probably was not the most enviable of positions for the Jayhawks to be in. After all, they led by as many as seven at the 15:30 mark of the second half and, for the most part, had an answer every time Duke chipped into that lead.

Most often, that answer was Newman, who did his prettiest work in the corners and did his dirtiest work in the heart of the Blue Devils' zone defense, driving hard to the rim and getting fouled or finishing nearly every time.

The surging sophomore scored all 13 of KU's points in the overtime session, including two 3-pointers and the four free throws that iced the game.

“Oh, man, he went crazy,” said Graham, who finished finished with 11 points, six rebounds and six assists in all 45 minutes. “Malik definitely carried us. He was playing great. Call him ‘Mr. March.’ Eh. We're going to stick with ‘Postseason 'Lik.’ It's working.” 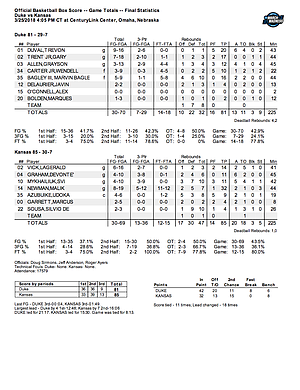 For all of Newman's surface-of-the-sun-hot offensive moments, it might have been his late defensive stop that mattered most. After KU senior Svi Mykhailiuk (11 points, 10 rebounds and five assists) tied the game at 72 with one of his three 3-pointers with 25.7 seconds to play, it was Newman who locked in on Duke's Grayson Allen and forced the Duke senior into a tough, off-balance, off-the-glass would-be game winner. Despite the strong defense, Allen's shot still got to the rim and rolled around twice. After it fell off to the sound of the horn signaling the end of regulation, the KU bench exploded onto the floor and the Jayhawks took a fair dose of momentum into the five-minute overtime period.

It was not quite the same feeling Self's Jayhawks had when the 2008 national championship game against Memphis went to overtime. But it was close.

“It was just new life for us,” Newman said. “There were five more minutes to go, it was anybody's ballgame and I knew we could pull it off.”

Added Self: “Malik defended it perfectly. And I think that stop did give us some confidence going into overtime. No question.”

Duke struck first in the OT, with freshman guard Trevon Duval, who picked Duke over Kansas less than a year ago, giving the Blue Devils a two-point lead on the first possession of the extra period.

Newman answered with a 3-pointer to put KU ahead and the two teams traded leads for the next few minutes, merely adding to what was already easily in the running for college basketball's game of the year.

Starting with a pair of Newman free throws that tied the game at 78, the KU sophomore closed on 9-3 run, burying one more triple and six free throws to send the Jayhawks to San Antonio.

Pinpointing what the right thing was became oh so easy after the final horn sounded. After back-to-back heart-wrenching losses ended their season in each of the past two years, the Jayhawks finally broke through and were able to experience the feeling of cutting down a net that signified something other than their 14-year dominance in the Big 12.

“That was the plan all along,” Newman said. “To get here. A lot of people thought we wouldn't be able to make it, but I know what kind of guys I'm competing with. They're tough, they're hard-nosed and we love one another. I had no doubt that we could get to San Antonio.”

For Graham, who was last to trim the nets in Kansas City, Mo., two weeks ago after the Big 12 tourney victory and first to get his prize on Sunday night, the feeling was nearly indescribable.

“That pair was a special pair right there,” he said of the scissors he used to cut the net. “I finally got over that hump that I've been talking about and it felt great. I was too anxious to get up there, so I just went up first.”

Asked for what must've been the 100th time how he felt in the aftermath of the biggest victory of his life, Graham summed it up ever so simply, but rather fittingly, as well.

“I'm smiling. I'm happy,” he said. “I don't even know how to describe it. … Definitely the best moment of my career. This is what we've been working for for the last four years and we finally get to experience it.”

As for Self, whose record in Elite Eight games — now 3-5 at Kansas and 3-7 all-time — has been the source of some serious criticism throughout the years, the KU coach who has been as hard on this team as any group he's ever had, called Sunday's feat the best of the three.

“The first one was relief, against Davidson,” he began of his first trip to the Final Four in 2008. “The second one was a little bit of surprise, with the 2012 team. And this one, I'll be honest, I think it feels better than the other ones because we had to play an unbelievable team, an unbelievable coach and we had to play our best game of the season.”

Just how good was that “best game?”

“I would say this is the second-best win that we've ever had,” he said, noting that only the 2008 title-game victory over Memphis ranks above it. “That was a big-boy game, a heavyweight bout, and we fortunately caught them late with a pretty good right, because that could've gone either way.”

They will face Jay Wright's Villanova squad — one of the two programs that kept KU from getting to this point two years ago — at 7:49 p.m. central time in Saturday's second game, with a berth in the national title game on the line.

“You come back for this right here,” Graham said before joining his family back out on the floor for a little more celebrating. “This tops it all off. We're going to the Final Four.”