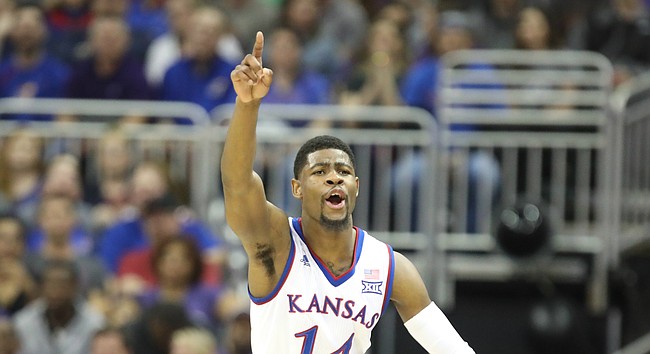 The path that led them there may have been slightly different than in seasons past. But it took them to the same place.

The Kansas Jayhawks will enter next week's NCAA Tournament as a No. 1 seed for the third season in a row and the eighth time in Bill Self's 15 years leading the program.

That much was revealed Sunday evening, during the NCAA Touranment Selection Show on TBS, and came on the heels of Kansas winning an NCAA-record 14th consecutive regular season conference title and backing that up by winning three games in three days in Kansas City, Mo., to claim the 2018 Big 12 tournament title, as well.

"I really like our team right now, after this past weekend," Self said. "It's been an up and down season. I think we're on an uptick right now. We've had some good teams going into the tournament and I think this is one of those teams."

The Jayhawks (27-7) will head to Wichita next week to begin their run in this year's Big Dance and they will face 16th-seeded Penn (24-8) in their first game on Thursday.

The Jayhawks and Quakers will tip off at 1 p.m. on TBS.

Already well versed in record-setting streaks, KU's inclusion in the 2018 field puts the Jayhawks in the tournament for an NCAA-record 29th consecutive season.

The Jayhawks, who will play in the Midwest regional, joined Virginia (South), Villanova (East) and Xavier (West) as No. 1 seeds in this year's bracket and likely landed in the Midwest, which runs through Omaha on the road to the Final Four in San Antonio as a result of their strong showing this weekend in the Big 12 tournament combined with Xavier's loss to Providence in the Big East tourney.

Asked Saturday night, after his team's 81-70 victory over West Virginia, about the process of waiting for their fate to be revealed, Self explained that the waiting game at Kansas is a much more relaxing journey.

“It's a different feel here,” Self said. “At Tulsa, I remember one of our players, when we were getting ready to watch, saying, 'OK, just not 8 or 9 in the East,' because that's when Duke was 32-0. And the very first deal came up and (read) “Tulsa, 8 in the East.” So, it's a little bit different now because, (back then) there was that anticipation and that excitement to get in the tournament. We've known for a while that we were going to be in the tournament, but certainly (it's) exciting to see the pairings and who we're matched up against.”

Now, it's time for the Jayhawks to flip the switch from Big 12 champs to national title contenders.

“We've been good in the tournament and we've been not so good in the tournament,” Self said. “We need to build off of this (WVU victory/Big 12 tourney title) and go play our best ball and not be giddy thinking we've arrived because the bottom line, that game could've ended so differently if we hadn't made some really hard shots.”

Self said his sole focus as the 2018 bracket was revealed Sunday evening on TBS was on the first-two game tournament the Jayhawks will have to win to advance.

"I thought it was exciting watching how you guys unveiled it," he told TBS host Ernie Johnson. "I was looking at the 1-16, 8 and 9. That was all that I was focused on."

Stay in touch with KUsports.com throughout the night for more on KU's road in the NCAA Tournament and be sure to pick up a copy of our special edition NCAA Tournament section in Monday's Journal-World.

And so it begins...peaking at the right time.

This team has reached incredible heights this season, that weren't necessarily expected. Why not go all the way?

let me see...the committee gives KU the number one seed but then puts 2 teams in their bracket that are ranked above them at 4 and 5? gee thanks.......it's going to be really tough to get to a final 4.....the midwest regions was picked as the toughest region by far by the experts. But I do like the chanced at an elite 8..nobody scares me. glad we didn't get arizona as our number 4, or a kentucky as a 5. if ku makes it to the elite 8, i hope michigan state beats Duke. I think we match up better with michigan state than we would with Duke......time to put it all together and play with passion and toughness!

Just play the next team up. Don't look ahead. Ignore all the talking heads and just win baby!

Our chaances to reach the Elite Eight looks good but getting through the winner of Duke/MSU makes our Final Four hope bleak....

I kind of agree with you, but there were a lot of people saying the same thing during the season. This team has shown us they have the potential to go all the way. The conference season was a slug-fest-grind-it-out long haul. But these guys did it. And they went 3 games in 3 days and won the conference tourney. I believe in these guys now. Udoka went down to a mild knee sprain. I thought they'd be lucky to make it past OSU. They not only made it to the championship game, but they took control in the 2nd half and made it their game. I believe in this team!

My negative side: That won't be anything new, Suzi. Bill Self already has an abysmal 2-5 record in Elite Eight games at KU (plus two other losses with Tulsa and Illinois).

My positive side: What makes you think Duke and MSU will both make it to the Sweet 16? And if Kansas and Duke meet in the Elite Eight, KU has won its last two meetings with the Blue Devils.

My practical side: Let's take care of Penn.

Both teams like us have had some really bad games and lacked consistency at times but Kansas is on a roll right now and I like the odds against either team. Duke lost to St. John's which would have been this season's biggest upset if Villanova hadn't done the same.

I think that having Silvio being able to play a positive 10 minutes or so has given me more confidence if some team tries to play the "hack-a-shaq" in late games.

It's March Madness, guys. Nobody gets an easy run. There's always someone in your bracket that can beat you.

Ivy League teams have a long history of upsetting high seeds in the NCAA Tournament, so the 'Hawks cannot overlook Penn

Sooners always get favorable treatment from the Selection Committee:

2016: OU got #1 seed despite not winning Big 12 regular season, nor making it past Big 12 Tournament quarterfinals.

Sooners must be slipping $$$ under the table to the selection committee.

I think OU got in on the Trae Young marketing effect. ESPN was all about Trae Young up until the last couple of months when OU slid. I think they want people to tune in to see him. I agree Okie State was tougher.

No question that Trae Young is the reason OU is in the tournament.

Looking at the teams in KenPom--we definitely didnt get any favors the first weekend with the best 16 seed and the best 8 seed--Seton Hall is 26--a few spots behind TCU and ahead of KSU, Texas, and Baylor--so no push over.

This team is looking pretty good right---just need to keep the energy level up and play D and rebound. Hopefully Dok is back as i would love to see him and Silvio on the floor at the same time for a few minutes.

ESPN has us as a 14-point favorite against Penn.

Tougher the draw the better, I want KU to win the National Championship. A true champion is one that beats everyone.

Gotta beat the best... to be the Best!

Let's take a moment and review the teams we lost to up to this point:

The best loss, if there is such a thing as a good loss, is our home loss. In retrospect, all our other losses look more and more like WTF losses. To get run off the floor by NIT teams like UW, BU, and OSU (twice) is head-scratching. The loss to ASU didn't seem like a bad loss as they shot up to #2 in the polls, but now that they have ended up in the First Four, it's like, how did we get dominated by them? The loss to OU looks bad because we blew that one against an OU team that was starting to tank. And don't even get me started about the OSU losses.

I just hope Josh Jackson, now with the Phoenix Suns, was right when he said back in December that Kansas would advance deeper in the Tournament than Arizona State.

This season's been one beotch after another, and our bracket looks like more of the same. So, let's just get on with it and take care of business.

1] I actually like our bracket's first three rounds for KU plus no Missouri, Wichita State, Kentucky or Arizona.

2] I've never seen Dickie V so pissed in his life about Oklahoma getting in and Oklahoma State not and Bryce's list confirms it. [Bryce, I won $8.00 this week...keep it up but be a lot more negative!!]. It's all about the money and show casing Trae Young

3] I for one seeing us get to the Elite Eight and then Michigan State slamming the door....as they have done many times before. Still, that will total 30 wins and a helluva season!!

4] WOW!! The committee did no favors for Virginia throwing Arizona and Kentucky into their bracket!!

5] Listening to the commentary guys, it appears that they feel Villanova needs to dust off more space on the shelf for another trophy.

6] Hot Dog!! Bill indicated that Silvio was a Four not a Five so we will see the African Connection on the floor most likely next year!!

7] Calipari was actually pretty funny, Rat Face was as pompous as ever, Bill was humble and pretty realistic, but when Bill eventually moves on, I really like that Jay Wright!!

8] I was hoping for Friday /Sunday to give Dok another day but, if we take care of business first round-wise, Dok won't play till Saturday which is still an 11 day break to recover.

9] 29 NCAA appearances in a row for KU with 33 out of 34. That means every student who has entered the University of Kansas since 1981 has seen KU in the NCAA Tournament!!

Your 9] should read, "29 NCAA appearances in a row for KU with 34 out of 35. Brown took us to the tourney five years straight. We weren't allowed to go the next year and then we've been there 29 years straight.