Kansas guard Devonte' Graham (4) cuts down his share of the net following the JayhawksÕ 81-70 win over the Mountaineers in the championship game of the Big 12 Tournament, Saturday, March 10, 2018 at Sprint Center in Kansas City, Mo.

Kansas City, Mo. — It’s called a shooting sleeve, looks like a white stocking, and stretches from just above the wrist to just below the armpit.

Devonte’ Graham wears his on his non-shooting arm — at least he did until he decided to take it off in mid-dribble.

All alone and just past midcourt, the Kansas basketball team’s most impressive multitasker revealed a new move Saturday during the Big 12 title game in Sprint Center.

Graham tore the sleeve off between dribbles and pitched it over the scorer’s table with his left hand. It was reminiscent of watching a man who you just know is going to pummel his opponent remove his jacket and glasses before getting down to business. 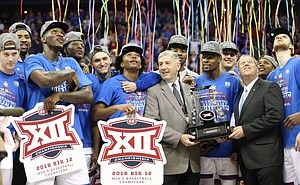 View a gallery of images from Saturday's Big 12 Tournament championship game between the Jayhawks and Mountaineers at Sprint Center.

The sleeve off, Graham went about ensuring Kansas the Big 12 tournament title with an 81-70 victory Saturday against West Virginia.

Newly sleeveless, he dribbled to the left baseline and nailed a pull-up jumper. The next time down the floor, he stood alone with the ball, well above the top of the key, and affected body language that suggested he was going to do anything but what he did, which was shoot. That 3-pointer capped a seven-point run that put Kansas up 73-66, a run that started with Graham finding Silvio De Sousa alone under the basket for an easy two points.

"When I was trying to get open, he held my arm and pulled my sleeve down," Graham said of a West Virginia defender. "It was just hanging on my hand, so I took it off and threw it away."

In order for Kansas to get the most out of its three days in Kansas City without injured center Udoka Azubuike, it needed to gain yet another trophy, and then some.

The Jayhawks came away with more than they had any reason to expect. Malik Newman made 15 of 22 3-pointers in three games, won the Most Outstanding Player hardware, and enters the NCAA tournament with soaring confidence. De Sousa played so little in 12 games that he came to Kansas City with 25 points and 18 rebounds. In three days, he produced 30 points and 29 rebounds, going out with 16 and 10 in the title game. He started this basketball season playing for a high school in Florida and finished Big 12 play by dominating the glass.

"And he'll only get better from here," Graham said. 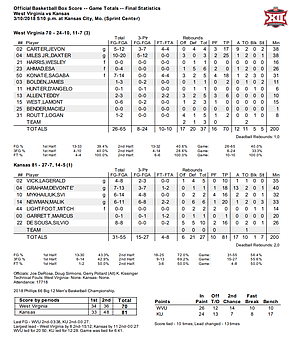 Too much valuable confidence was gained for Kansas to end the weekend on a bummer. Graham wasn’t about to let that happen.

He wasn’t himself for the first five halves of basketball during the conference tournament. To that point, Graham had made just 9 of 29 field goal attempts, looking like a shooter weakened by tired legs.

Then winning time arrived, and the most proven winner on the floor took over.

Graham scored 16 of his 18 points in the second half, making 6 of 7 field goals and 3 of 4 3-pointers. He steered the Jayhawks to 48 second-half points and finished the night with a career-high 13 assists and just two turnovers. Fittingly, West Virginia’s final possession ended when Graham stole the ball at halfcourt.

Kansas basketball coach Bill Self, as well as All-Big 12 tournament honorees Malik Newman and Devonte' Graham, explain how the Jayhawks emerged from a heated conference title game as 81-70 victors over West Virginia.

KU’s third victory of the season against the Mountaineers finished much as the previous two did, with Graham leading a one-sided assault.

Look at it this way: If college basketball were played in quarters instead of halves, West Virginia would have outscored KU by 24 points in the first three quarters of the three games, and Kansas had a 49-point advantage in the three fourth quarters.

How do the Jayhawks do it?

And the ball is in the most experienced hands.

“He’s terrific,” Mykhailiuk said of Graham. “He has the ball every time and he makes plays for us every time.”

If Graham practices in similar fashion to his game performances, he must finish every day brilliantly, which might explain why he wakes up every day with a smile on his face. 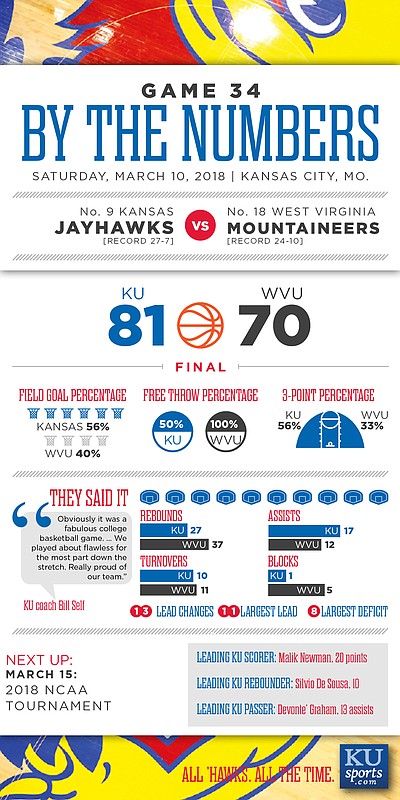 I wondered what that was that he threw off the court as he dribbled into the offensive zone! I thought he pitched a towel or something else out of bounds. That may have been the move of the game and no one even noticed....those things don't come off easily.

I must have missed where Devonte tore off his shooting sleeve, because I spent half the game hitting the refresh button on my computer because the sling.com live stream kept freezing and buffering. Not cool, sling.com.

threw it into the crowd

It was pretty awesome. You're like, what is he doing? Then he tosses it and bangs in a shot. Pretty studly.

I watch the games through the espn watch site using my sling account. When I watch it through the sling app it freezes and buffers constantly. Very uncool as you say.

Problem is, I was watching the game on ESPN3 - I get the feed through Sling.

I would, but I don't think YouTube TV is available in rural southeast Iowa right now. But thanks for the suggestion anyway, David. :)

Another episode of Lon and Trae

Listen up! Today is selection Sunday .......so be back here around 4 today

Lon Kruger ; Got some mail for ya

Trae walks back to his room sorting through his mail

Lattin looks at Trae seeing all the mail and asked what he had going on.

Lattin you did run out of gas

This had me cracking up out loud! Well done!!

The statistic about the "4th quarter" differential is very telling. KU knows how to finish games, and WVU doesn't.

I know that Bob Huggins is a good coach, but frankly, he can't carry Bill Self's shoes when it comes to motivating your teams to value each and every possession and being tough throughout.

WVU obviously changes its style in the last 7-10 minutes of close games. They put the ball in Carter's hands, and it doesn't move much until someone takes a guarded 3. On the other hand, KU uses its motion offense to move the defense around and invariably gets much better shots.

Rarely does KU lose a close game in the last 5-6 minutes. With the exception of the OU game at Norman, where the hack a Dok scheme worked, I think that every one of them has gone KU's way this year, whether at home or on the road.

At least we do against West Virginia this year. I thought we lacked that killer instinct earlier in the season but it's coming back and just in time.

OU does not deserve to get in!

2 time Big 8 Player of the year ...back in the day...Lon Kruger was a superstar! 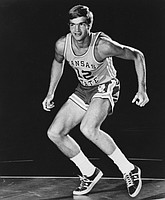 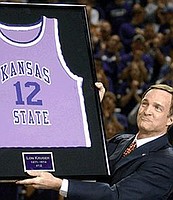