It was a sneaky-quiet 20 points and it came in a camp scrimmage against his teammates, but the particulars were not important.

What was noteworthy was the way Kansas forward Dedric Lawson scored those 20 points during the Blue team’s 81-74 loss to the Red squad at the first Bill Self Basketball Camp scrimmage of the summer on Tuesday afternoon at Horejsi Family Athletics Center. 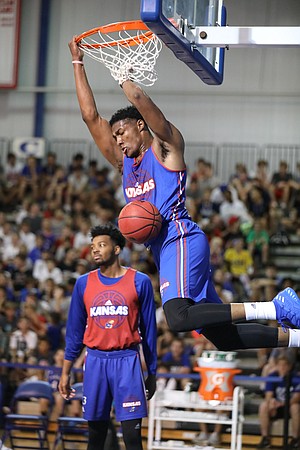 The Bill Self Basketball Camp scrimmage was Tuesday, June 5, 2018, at the Horejsi Athletic Center.

Inside. Outside. Off the dribble. Up and under. Up and over. All of that with the handles of a guard and the balance and control not always associated with someone who plays the power forward position.

In short, it was the perfect sneak peek at all of the things that the Jayhawks hope Lawson will do for them this winter when he finally puts on the KU uniform for real and is able to impact the team in ways in that extend beyond the practice gym.

“I’m very ready,” said a smiling Lawson after the scrimmage, which, he added, was just as much fun because of the smiles it put on the faces of the campers in attendance as it was for the points he put on the scoreboard. “I’m very intense for the season and I’m just putting in the work trying to stay ready.”

Pegged a couple of weeks ago by KU coach Bill Self on an Andy Katz podcast as a player who could join teammate Udoka Azubuike in competing for Big 12 player of the year honors during the 2018-19 season, Lawson said he versatility, which was on full display on Tuesday, was something that always had helped him stand out on the court.

“Lamarcus Aldridge,” Lawson said when asked for the name of a player who has a similar game. “He scores all over the floor, in the post, knocks down outside shots. I like his game a lot.”

Even mentioning the former Texas standout and current San Antonio Spurs big man as a sort of target to hit showed the confidence Lawson has in his game.

Sure, some of that came from his monster sophomore season at Memphis back in 2016-17, when he averaged 19.2 points and 9.9 rebounds per game. But those were just numbers, the product of an athletic and naturally gifted 6-foot-9 forward doing things that others simply cannot.

What he gained at Kansas while sitting out the 2017-18 season is the reason Lawson — and so many others — believes he can be an even tougher player to stop than he was before.

“Man, Coach Self helped me with a lot of things from the scout team standpoint,” Lawson said. “He just helped me focus in. There were certain days when I came to practice and I didn’t feel like I had nothing to practice for and coach would tell me, ‘Come on, Dedric. Stick with it, push through it, work on your game.’ Things like that.”

So Lawson did and he now believes he has his game in the best shape it has ever been.

That was evident on Tuesday, when Lawson teamed with freshman big man David McCormack (18 points) to lead the Blue team in scoring. With McCormack, Red team forward Silvio De Sousa (17 points) and others glistening with sweat and playing all-out on every possession possible, Lawson simply found the sweet spot and delivered when called upon.

His 10 first-half points featured a little bit of everything — drive to the rim for a scoop shot to get it started, two jumpers along the baseline (one on a fade-away, another over the outstretched hand of Mitch Lightfoot) and two easy lay-ins, one off of a rebound.

His 10 second-half points came off of a driving spin move, back-to-back 3-pointers and a deep jumper.

Asked after the scrimmage how comfortable he felt shooting from distance, Lawson said he was “very comfortable” and added that he spent a good chunk of his time back home in Memphis working on that shot with a former high school teammate.

The goal now is to maintain that level and improve upon it before the start of the season.

“It does feel like it’s starting,” Lawson said of the 2018-19 season, which officially kicks off with KU’s annual Late Night on Sept. 28. “I already knew from my freshman year, the summer (goes) by fast. And it was like, ‘Dang, what did I really do with my summer?’ That’s why you have to take it seriously and going out there every day is a must. You got to work on something, just to improve anything, your mind, your body, things like that.”

As for the rest of Tuesday’s scrimmage, which featured just one former Jayhawk — Travis Releford, who scored 10 points for the Red team — Lightfoot’s six 3-pointers led to a game-high 22 points and helped pace the red team to victory.

Lightfoot opened the game with a 3-pointer and looked as confident as ever while stepping into each one.

Junior center Udoka Azubuike did not play because of an illness and freshmen guards Quentin Grimes and Devon Dotson also did not play.

Grimes is in Colorado Springs with Self working with USA Basketball’s U18 team. Tuesday afternoon, USA Basketball announced that Grimes made the final 12-man team that will head to Canada later this week to open play in the FIBA Americas.

Joining Grimes on the team are Class of 2019 top targets Matthew Hurt and Jeremiah Robinson-Earl.

“It was tough getting it to 12,” Self said in a press release. “I think the committee made some good selections and I’m excited about working with this group. One of the things I think they bring to the table is versatility. They’re very interchangeable. I can see us playing four little guards around a big. I could see us playing two bigs, two little guards and a three. I think this team has some different things they’ll be able to do, depending on how we stack up against our opponents."

Mitch for three, Svi who?

I wouldnt say FF or bust..sure they are expected to be there because they have the potential BUT keep in mind, this team lost A LOT of experience and leadership..we really dont know how any of the incoming players are gonna perform..3 pt shooting is still a concern for this team..if they play anywhere near to their potential, winning the Big 12 is a given (KSU has the talent and experience but they also have Weber as their coach so.......)

Nothing to worry about. He had a family obligation and is expected to report to campus tomorrow (June 7)

Had Azibuike stayed in the draft Dedric would still have been a matchup nightmare..but WITH Azibuike back, teams are gonna be hard pressed to contain him...if both Dedric and Azibuike can stay healthy, they WILL be the best front court in the nation

I think McCormick will give Udoka a real run for a starting position. Either way, Self will finally have enough bigs to play more aggressively.

There won't be four guards in the starting rotation next year... but I doubt Self will throw out the four guard offense.

IDK about all that..Azibuike is a proven commodity who looked rather impressive in the NBA workouts..DM is a freshmen who still hasnt logged any real PT..I understand being high on him, but to even suggest he will push Azibuike for his starting spot is a little ridiculous..only way DM starts over Dok is if Dok gets injured..I dont know if the 4 guard offense can work wit next years guards..dont know if enough of them can shoot good enough from 3

I agree, Craig. I think it's a bit of a leap to say McCormack could push Udoka for a starting spot. But he will push him in this way — If Udoka is struggling or committing silly fouls or just not plugged in overall at any point during any game, Self won't hesitate to go to the bench and he'll have a couple of guys sitting over there who give him a much better option to pull Udoka out than Lightfoot did a year ago.

Matt, ty for the story updates & videos. It's great to see a preview of this very promising KU BB team.

One suggestion for the videos, would it be possible to list the player's practice jersey #s to help identify the new players?

Fair question. Sorry about that. Here's a quick run down of the new guys, minus Grimes & Dotson who aren't here yet...

I know we are talking about a summer camp scrimmage here but looks as if Charlie Moore is sporting the #2. Another indication suggesting Vick's days as a Jayhawk are done.

you're a BOOB, tait! thanks for the intel on the Springs 'open' practices. gfy