The next catch Mavin Saunders makes in a college football game will be his first in a Kansas football uniform, as well as his first recorded reception since late in the 2016 season.

Nevertheless, the former Florida State passing target enters the fall as one of more than 60 players on the John Mackey Award Preseason Watch List, which tracks potential nominees for the hardware handed out to the nation’s top tight end.

Upon joining KU this past spring as a graduate transfer from FSU, Saunders, a 6-foot-5, 256-pound senior, didn’t garner overwhelming buzz. But teammates did note the Bahamas native’s potential.

“You can definitely see his physical abilities as far as blocking and stuff,” Kendrick added.

Rivals rated Saunders a three-star prospect out of high school. Other recruiting services, such as ESPN and 247Sports, listed him as a four-star talent.

Including Saunders, the Big 12 has just four players on the Mackey watch list, where he is joined by Iowa State’s Chase Allen, Texas tight end Andrew Beck and Oklahoma’s Grant Calcaterra.

At this point it is unclear whether Saunders of junior James Sosinski will emerge as KU’s top tight end or whether both will feature into the game plan.

In the weeks ahead, KU football coach David Beaty plans on having much more thorough, football-centric discussions with the university’s new athletic director, Jeff Long. 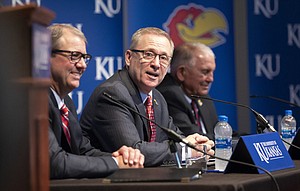 The former Arkansas A.D.’s official start date at KU isn’t until Aug. 1, and because both the Beaty and Long families had July vacations planned in advance of Long taking over, the man in charge of the athletic department and the football coach have only spoke over the phone.

“But we have communicated quite a bit,” Beaty said this past week, “and the thing that I really love about talking to him is his vision. I always believe that your vision pulls you. And as he speaks about his vision and he talks about how he wants to create a championship at KU in all areas. We share the same things when it comes to how you get that done.”

The fourth-year football coach, who brings a 3-33 record into the 2018 season, predicted those shared values will make for a “terrific marriage” between Beaty and his new boss, Long.

“And the thing that he also has shared with us is he’s completely and totally behind us,” Beaty added, “and anything he can do to help, he’s there to do it.”

Players ‘focused’ on preparation, not speculation

Once KU chancellor Douglas Girod hired Long as the university’s new athletic director, speculation grew that Beaty will be coaching from a hot seat in the months ahead.

While KU’s football coach acknowledged he understood the presence of such public opinions, he doesn’t anticipate outside noise distracting his players.

“Our kids are very focused. They have a lot of experience now,” Beaty said, when asked whether he would have to find ways to help the Jayhawks tune out negative buzz surrounding his job security.

“I think it’s something they’ve been able to draw on as they go through different things in their time here. And these changes, a lot of the guys on our team, they haven’t gotten to interact with an A.D. on a lot of occasions,” Beaty said. “So I’m not sure a lot of them really understand how an A.D. can truly help you and help a program. I think that’s something we’re excited about, seeing what Jeff Long’s going to do to help this entire athletic department.”

What the players do understand, Beaty offered, is “getting ready for the season.”

Actually, if Beaty can win 4 or more this year I would not be surprised for Long to stick with him one more year. I know most people on here don't believe it, but the roster is improving, and the Senior Class is what's left of the Weis era and still full of duds. I am guesiing a lot more underclassman will be playing this year. So, this next year Long should stick his nose in and kick the football staff in the butts to focus on recruiting High School Freshmen and fill next year with 25 new Freshmen recruits and avoid the transfers while we have the opportunity. Our upcoming Junior Class looks to be a point to maybe make a turn around. If Beaty can win and stay another year then that might be a great way not to have too avoid turnover. Also, Long has a five year contract and he has time, so why not wait this roster rebuild out and then make the decision. At that time a Beaty buy out will be more than cheap.

4 wins will not buy betty another year as KU's coach. The roster is not improving at all and that is his fault. Taking a bunch of Juco recruits that no one else wants or some injury prone transfers is not the way to do it. The roster is in as bad a shape as Weis left it. This team is screwed and it's all his fault. He will be fired after the non-conference games and no one will miss him.

His termination seems like a foregone conclusion. It would be an embarrassment not to fire him since we got rid of the AD because he hired him. I think he needs a minimum of 5 and has to be competitive in 3 of his losses to have any chance of returning next year. That would satisfy me enough to retain him.

I'm glad you put 4 wins this year...I'm not sure he will leave KU with 4 wins. By the way, he needs more than 4 wins to keep his job. In 2017 he said year 3 was the year to perform with 6 wins, don't let his losing ways lower your expectations of wins.

Brian, I agree. Hopefully Long knows what it takes to turn a program around. Especially the dreadful situation that Beaty inherited. Granted, Beaty has made plenty of mistakes, but he is gaining knowledge and learning from them. If he doesn’t show some MAJOR progress this year, I’m not sure we can keep him, but if there are wins and the 40+ blowouts are non-existent, then there may be room for pause.

We'll see. Time will tell. Negative speculation does not help. Let's encourage as opposed to discourage. Everyone wants (KU fans / alumni) want the same thing. Let it play out.

Everyone that doesn't have their head up Betty's ass can see he needs to go. He should never have been hired and should not have been given a 4th year.

That had to be an awkward conversation.

August 1 Long in place, August 3rd and evaluation of the costs of Beaty. I'm with a lot of others, I'd be very surprised if Beaty coaches 1 more game at KU.

Long has too much to lose allowing him to coach a year.