For the first time since 2009 the Kansas football program has two players on a Preseason All-Big 12 first team.

A pair of redshirt seniors for the Jayhawks’ defense, both defensive tackle Daniel Wise and linebacker Joe Dineen were among the 17 seniors, 11 juniors and one sophomore selected by a media panel as the conference’s most likely standouts this coming fall.

KU last had more than one representative on the preseason first team in 2009, when receiver Dezmon Briscoe and safety Darrell Stuckey made the cut.

A hometown linebacker from Lawrence’s Free State High, Dineen led the Big 12 in total tackles (137), tackles-for-loss (25.0) and solo tackles (93) in 2017. What’s more, the 6-foot-2 KU captain led all FBS players with 7.8 solo tackles a game and ranked third nationally with 2.1 tackles for loss per game. 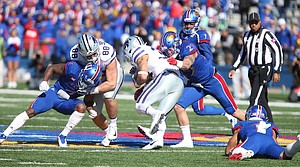 Wise, too, produced impressive numbers as a junior this past calendar year. A defensive tackle from Lewisville, Texas, the 6-3 lineman recorded 16.0 tackles for loss, and 7.0 sacks.

Wise accounted for 53 total tackles, one forced fumble, one pass breakup and five quarterback hurries to supplement his sacks and TFLs.

Coaches named Wise a first-team all-league defender following his redshirt junior season, while media placed him on the second team.

The Big 12 media preseason poll will be released on Thursday.

Offensive Player of the Year: Will Grier, West Virginia, QB

*Note: a tie in voting created an extra RB position

Two players that I have enjoyed watching. They both will earn college degrees and should hold their heads high. The ultimate example of what college athletics are all about