This post was originally published on the Lawrence Journal-World's crime, fire and courts blog, Lights & Sirens, featuring assorted public safety news and notes from Journal-World reporter Sara Shepherd. You can find more posts from this blog at LJWorld.com.

The call about the man "wanting to give free-throw advice" came in about 3:30 p.m., but when police got to McCarthy Hall the man — who's not a KU student — had already left, KU police Deputy Chief James Anguiano said. For that reason, at least as of about an hour after the call, police didn’t plan to file a trespassing or other criminal report, Anguiano said. (Radio traffic indicated the man had been there multiple times that day before the police were called, and may have come back again just before 5 p.m. Note: Subject's clothing description included a blue and red windbreaker.) 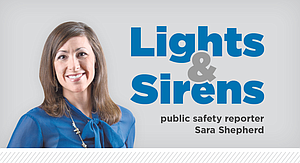 Anguiano said the name of the intended recipient of the man’s advice was not relayed to him by the officer on scene.

In the final 3:37 of the KU’s 85-80 loss to Oklahoma Tuesday night in Norman, Oklahoma decided to repeatedly foul Udoka Azubuike, sophomore center from Nigeria, in hopes he’d miss his free throws. And the strategy played out just like Oklahoma wanted.

— Journal-World and KUsports.com staff contributed to this report.

KU coach Bill Self joked about the incident while meeting with the media Thursday.

Self on KUPD responding to call at McCarthy Hall offering up free throw advice... "If it's Rick Barry I'm all for it. Or Mark Price. ...I do think it was well-intended. As long as it's not Freddie Kruger, I'm OK with it." #KUbball

Wow. This behavior is inappropriate on a bunch of levels.

7' and 280lbs scared of someone offering advice?

KU Police should have placed "This Man" under arrest. They obviously identified him, how else would they know "he is Not a KU student"?

On second thought, we can only hope this person of interest was indeed "Rick Barry" coming back to town! A Police Escort would then be appropriate!

He just wants to help. Come on!

It would have been funny 25+ years ago but not so much now.

I am afraid Marius is 100% correct. Nothing can be taken for granted anymore. Simple things like a knock on the door, walking to your car in a parking lot day or night, leaving your garage door open while your home, etc., these have potential for dangerous situations.

Everyone, sadly, must be aware of and watch out for unpleasant circumstances. Who is to say this person didn't lose a large bet on the game and wished to hurt Dok?

I know it sounds crazy but, unfortunately, crazy is the norm these days.

"Simple things like a knock on the door, walking to your car in a parking lot day or night, leaving your garage door open while your home, etc., these have potential for dangerous situations.

Everyone, sadly, must be aware of and watch out for unpleasant circumstances."

I totally agree with this, but is life inherently more dangerous now than it was 3+ decades ago? I wouldn't know for sure and I wasn't around longer than that, but my instincts tell me that these threats have always existed and possibly were just as "common" then as they are now... we just know more about it now because of social media and a 24 hr politically motivated news industry among other things.

I don't and won't let my kids roam free the way that I did growing up which makes me sad for them, but I am not so certain that we are more likely to be victims now than we were 30 years ago.

"Who is to say this person didn't lose a large bet on the game and wished to hurt Dok?" Or maybe something even worse, like the guy could have been from Topeka!

I have a rock solid alibi

Jerry Walker 7' and 280lbs scared of someone offering advice? Why this Jerry? Not even the slightest hint in this article that Dok knew the man was there. While I'm here I have to comment on Bill self leaving Dok In the game at Oklahoma: Asked if he checked with Azubuike at any point during the nightmarish, one-minute-and-41-second stretch late in Tuesday's game, Self said simply, “I asked him if he wanted to be in and he said, 'Oh yeah.' Even the worst player on the bench or even a 5'5" middle school kid would have said yes in this situation. Did he even remotely expect UA to say no? How could he have said no with the eyes of his teammates and coaches on him. What would they have thought of him if he had said no? Coach made the big guy take the Kobayashi Maru.

If the coaches aren't going to do their job and either (A) teach him how to shoot them or (B) take him out of the game in crunch time, then I guess someone else ought to.

Bryce, I respect your posts because they are well thought out and express your true feelings. Based on your views of the body of work by Bill Self, you have expressed his inability to get past the Sweet 16, his stubborn refusal to veer from his coaching philosophy when game conditions dictate a change, the lack of Final Fours when he had the talent to get there, his flawed recruitment of players with baggage that handicaps their value to KU and the seeming putting the team goal on the conference title and not an NCAA Championship.

In some degree or another, none of these conditions can be denied,. I would just like your honest opinion. Should Bill Self be replaced as the head coach of the University of Kansas?

Not as long as Sheahon Zenger is the AD. I don't trust Dr. Zenger to sell lemonade for 10 cents a glass at a roadside stand, much less hire a competent coach in any sport.

But if Zenger were to be replaced by a capable AD, yes. The men's basketball program has gotten stale and predictable, and really doesn't seem to have much direction these days. If we're going to keep pace with Duke, North Carolina and Connecticut, a change in the head coach is necessary.

Rumor has it ... it was former KU player Richard Scott. (joking... check out his FT shooting for his career at Kansas in early 90's).

The KU and Lawrence Police have trouble nailing down perpetrators when it comes to McCarthy Hall....