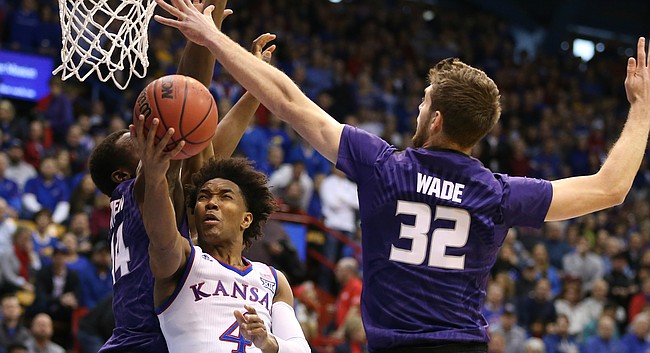 The way a typical sports fan’s sports brain is wired, now more than ever, it’s natural to focus on the next great addition on the cusp of joining your favorite team.

If the wait for Silvio De Sousa had stretched on for years instead of weeks, imaginations might have grown him into a combination of Wilt Chamberlain, Danny Manning and Joel Embiid.

Instead, as coach Bill Self predicted, he won’t be ready to show much for two or three weeks. De Sousa played four minutes against Kansas State in his debut Saturday, threw a pass that Jerry Rice couldn’t have caught and, afterward, marveled to teammates at the difference in the speed of the game between high school and college.

None of that means that De Sousa won’t help the Jayhawks in time. It just means that Self wasn’t spewing coach-speak when he said February will be when he's ready to make KU better.

The lack of depth and size without De Sousa and Billy Preston has made it tough to watch Kansas lose so many battles on the boards and surrender more inside buckets without thinking about what the team would look like with them.

Consequently, the players who have hustled their way to a 4-1 Big 12 record and one-fourth share of first place haven’t quite received the plaudits they have earned. The perimeter players have adjusted impressively and center Udoka Azubuike, who showed great footwork in the post Saturday, is on the come.

The shortage of inside scoring translates to this team needing to shoot a higher volume of 3-pointers without losing accuracy. KU ranks eighth in the nation in 3-point percentage (.415) and 11th in 2-point percentage (57.9). That doesn’t happen without excellent ball movement, smart shot selection and hot shooting.

Tonight's a tough matchup because West Virginia's relentless work on the offensive glass matches up with a KU weakness, and the Mountaineers' relentless defensive pressure tests a team's depth. If KU's Morgantown losing streak grows to five, that doesn't taint the credit this team deserves for staying in the hunt.

1] Shoot the highest number of 3 pointers so far this season and make the highest percentage of completions as well.

2] There will be turnovers. Do your best to minimize the damage after them.

4] Play your asses off on defense. No easy shots and over play the three point line.

6] Throw in an occasional zone defense as a change up to WV..

All that being said, I am afraid the best we will do tonight is stay competitive. If Frank Mason lost four times in a row here, I truthfully can not anticipate the current squad breaking the losing streak.

Still, ala the Minnesota Vikings, sometimes, you just never know!!!!

The Hawks need a ball handler other than Devonte. Who’s it going to be - Malik?

The Hawks need a rebounder other than Udoka. Who’s it going to be? Crickets...

The Hawks need to defend without fouling. ‘Buike, are you listening?

To the best of my memory, Azubuike has only fouled out once (TCU) averaging just over 25 minutes per game and 2.6 fouls per game.

Azubuike clearly has been trying to avoid fouls but it has also limited his effectiveness at times but overall, I give him a high grade for staying in the game.

Been a fan all my life, I'm an alum, but this is not the year. If we get Billy in there this month, we have a shot, but if not, I see us as a 2nd round loss in the tournament. We can lose to anyone on any night which is not usually the case. We've typically been able to win the "should win games" but the KSU and ISU games are proof this is not going to be our year. I get KSU is a rivalry and last year was down to the wire etc but ISU? We should bury these teams. Dok has done all he can, but we don't look his way enough to take the pressure of the guards and the deep ball. Key to success to beat us is to defend the 3. That's really the gist right now. We've seen it.

The Arkansas 40 Minutes of Hell style of play is not one that Kansas handles well even with a full roster that has played together for months. But our 4 guard-1 big roster that we now play probably has the best chance of winning in Morgantown as any roster in the past. Hot shooting and composure under pressure will carry the day.

I'm inclined to agree. Tonight's game comes down to how hot Kansas is on the perimeter and how they handle the pressure WVU brings

Nice article. It focuses on what KU has and not what they don't have. We will certainly be the underdog tonight, but if anyone can pull it off, it is Coach Self and his thin roster.

Just give it your best guys. It is still a long season.