Several hours after knocking off Oklahoma State at home on Wednesday night, Kansas State basketball coach Bruce Weber found himself still awake, staring intently at game film from two losses to Kansas a season ago instead of the box score from the Wildcats' latest win.

The reason? Although the 86-82 win over Oklahoma State certainly felt good — particularly because it came without injured point guard Kamau Stokes — Weber knows his team has bigger problems on the horizon. Namely, Kansas.

KU and K-State will hook up at 11 a.m. Saturday at Allen Fieldhouse for the first of two Sunflower Showdowns this season.

From Weber's perspective, Kansas, for all of its issues and deficiencies so far this season, is still the 13-time defending conference champion led by a handful of players that any team in the Big 12 would love to have.

“Well, they're still 3-1 in the league and the games they've lost, Arizona State's a very good team, Texas Tech's a very good team and Washington,” Weber said. “(They) lost Frank Mason, a veteran, the player of the year and not just the player of the year but a fabulous guy that had played four years and then Josh Jackson, the (No. 4) pick in last year's draft. I'm watching our games from last year at 4 a.m. this morning and I forgot how good he was. He just picked us apart. And then Landen Lucas was a veteran guy who knew how to play. So you lose three guys like that, it's not going to be as easy. But Coach Self has done a nice job of (with) what he has, figuring some things out. They still have very good players. Graham, obviously. The big guy inside. You've had some other guys step up. Lightfoot, against TCU, had a huge game, which helps them a lot. So they're still good and it's going to be a tough challenge — every game in the league is, and Saturday will be tough for us at Lawrence.”

From Self's perspective, the K-State clash figures to be extra challenging because not only is it the Jayhawks' next game and this team has had to grind out every game for the past month, but also because the Wildcats may still be seething from watching last year's game end on an apparent travel that led to a game-winning runner by Svi Mykhailiuk.

“I’m sure that will be something that will be talked about with K-State because, obviously, that game should have gone overtime, without question, because Svi did walk on that last play," said Self during Thursday's Big 12 teleconference, noting "that would not surprise me" if Weber and company use the no-call as added motivation.

“I know that coaches and players use every motivational tactic they can,” Self said. “That is certainly a natural one. I can understand why they were upset and disappointed last year leaving Lawrence.”

No news on De Sousa, Preston

KU coach Bill Self said Thursday morning that there was no new news in the status of withheld freshmen forwards Silvio De Sousa and Billy Preston, who continue to practice with the team while awaiting word from the NCAA that they are cleared to play.

Self said this week that the frustration level with the delay in both cases has gone up but also maintained that the folks at KU, including the two players, understand the process and respect that the NCAA has to do what it has to do.

Efforts by the Journal-World this week to reach the NCAA for some kind of clarity in the process and/or the delay in either or both cases were unsuccessful.

Graham, who leads the Jayhawks in several offensive categories, including scoring at 18.1 points per game, is the only Division I player currently averaging 18 points, seven assists, two steals and fewer than 2.5 turnovers per game.

Graham is one of 25 players on the mid-season list.

It would sure be nice to have those two for the K-State game, to give them a chance to work into the lineup. Really going to need them for WVU next week. WVU has had some close games,but have managed to escape unscathed in Big XII play. We may need that away win as they seem to be the greatest challenge right now.

The Jayhawks put some defensive pressure on the Cyclones late in the second half, I hope they practice that for the Wildcats and perfect it for the game with the Mountaineers. No Big XII game is going to be easy for anyone this year, but the Jayhawks always have a target on their backs and get everyone's best game.

No de Sousa? No Preston?

What does Zenger have to do with it?

Ive almost convinced myself that if Kansas took a brawl mentality into games we'd do a lot better. Seems like we think of games as games, and other teams see games as street fights where everything is allowed, including groin kicks and eye-gouges. You know. All the fake wrestling moves. But REAL in terms of their mentality.

Gotta get TOUGH. The Big 12 is actually a race this year...

I have to agree Joe. Also, I've notice Vick and Newman, rarely seem to sweat. Maybe its just their physical make up. I hope its not because they are not giving 100%.

Not everyone is Sean Miller... 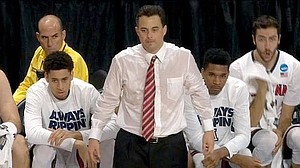 That reminds me of the classic Seinfeld routine about professional wrestling referees. He talked about how it was the easiest job in the world because you were a referee of a sport that had no rules.

Count on Billy and Silvio being allowed to play AFTER the West Virginia game next Monday. The connection between the former West Virginia AD, now the NCAA Gate Keeper and the Mountaineers title run is just too strong to ignore. And if you don't believe there is fire where there is smoke, then you will get burned.

My only hope is that ESPN will step in, wield it's mighty broadcast sword and force the NCAA to allow Billy and Silvio to debut as highlights for their Big Monday match up.

Then, again, I've been wrong on every logical prediction I've made so far on this situation so who knows??

That Luck dude should recuse himself from the process of reviewing KU players. It stinks!

KU never plays well at Morgantown regardless of who our players are. We are probably better off playing quicker players who can all shoot with two exceptions and hope for the best outcome. Maybe someone from KU will have a career night.

Damn... Came here hoping for some good/any news about De Sousa or Preston.

At least there was good news for Devante Graham.

Soon. The news is coming soon. Not sure what "soon" means anymore but soon. lol.

Wonder how far the stats had to be carried to make the statement about Graham being the only D-1 player with these stats. Trae Young is averaging 28 and nearly 10 assists. He must have just a tad more TO's or a few less steals.

Young is a stat generating machine, but he's still a freshman and prone to freshman miscues, so his turnovers are high as well. He forces a lot of passes and they don't always hit their mark.

Isn't the head of the NCAA Mr. Luck (The ex AD at west Virginia) ??

Damn... Came here hoping for some good/any news about De Sousa or Preston.

At least there was good news for Devante Graham.

i feel kinda bad for KSU..they watched the coach they ran out of town take his new team to the FF while they settled for a guy that is more suited to be a DII ccoach

What are you talking about??? They didn't run Huggins out of town; he left after one year to coach at his alma mater. If it weren't for the WVU opening, he might have stayed at KSU for a while.

the coach I am referring to is Frank Martin, who took South Carolina to the FF last season..those first 3 KSU teams that Webber had were good, and they were also Frank Martins