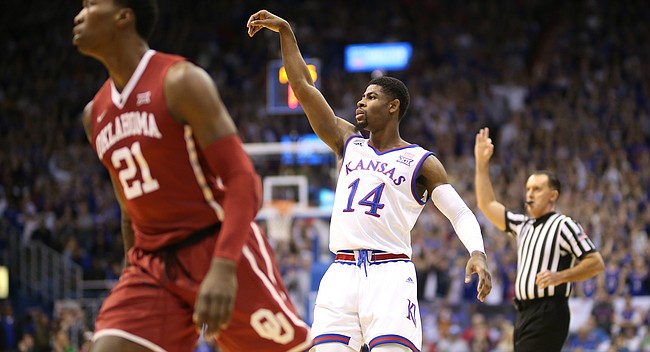 Kansas guard Malik Newman (14) hangs his arm in the air after a three over Oklahoma forward Kristian Doolittle (21) during the first half, Monday, Feb. 19, 2018 at Allen Fieldhouse.

A few weeks removed from its loss at Oklahoma in late January, KU throttled Oklahoma in the rematch, 104-74, ahead of its much-awaited trip to Texas Tech this coming Saturday.

Four Jayhawks posted double-digit points as the home team shot 61 percent from the floor against the reeling Sooners (16-11, 6-9).

Although OU freshman point guard Trae Young is one of the nation’s most heralded talents, Kansas limited him to 3-of-13 shooting and 11 points. 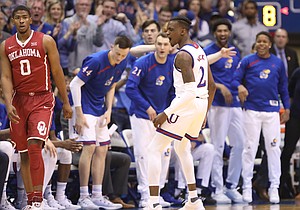 It was KU senior Devonte’ Graham who put on the offensive show on this night, leading the game with 23 points and dishing seven assists.

Sophomore Kansas guard Malik Newman hit the 20-point mark, too, making 7 of 11 shots and 4 of 6 3-pointers. 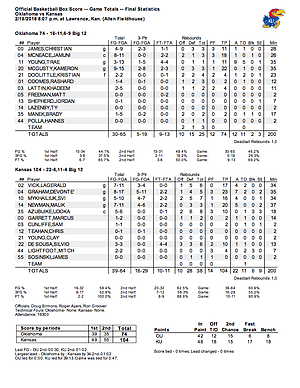 OU found itself in a 10-0 deficit less than four minutes in, as the locked-in Jayhawks bludgeoned the visitors with a Graham 3-pointer, a Mykhailiuk layup, a Vick 3 and a Vick dunk right off the bat.

KU didn’t let up in the minutes that followed, either, which made the game’s opening minutes so devastating for the Sooners’ chances.

Both Graham and Newman cashed in from behind the arc in the next two minutes. By the time Graham connected on another jumper and Mitch Lightfoot threw down a slam, KU had made 8 of 11 shots and extended its lead to 16 less than seven minutes in.

Yes, OU was able to get its deficit down to 10 by halftime. Still, the Jayhawks’ hot start and overall focus made keeping the Young-led Sooners down significantly easier.

• Offensive highlight: Nothing ignited the fieldhouse crowd quite like the most unexpected bucket of the night.

Freshman backup big man Silvio De Sousa — you know, the guy who had did-not-plays in two of KU’s last four games — made his most memorable basket as a Jayhawk in the second half.

Already with a career-high eight points behind him, De Sousa showed off his power to reach double figures.

As Mykhailiuk drove to the paint, De Sousa slipped behind OU’s defense on the left baseline. Mykhailiuk flipped a pass over his head and toward the rim. The 6-foot-9, 245-pound freshman on the receiving end made the crafty pass look even better, hammering in a two-handed jam for a 74-57 Kansas advantage.

Bill Self puts Lightfoot on the floor for his energy, and, man, did the backup sophomore forward deliver right off the bat.

Less than two minutes after checking in for Azubuike, at the 14:43 mark of the first half, Lightfoot had added three blocked shots to his stat line.

First Lightfoot got up to deny Khadeem Latin inside. On the very next Sooners possession, Young drove into the paint looking for some easy points but left with nothing, as Lightfoot swatted the likely NBA lottery pick.

Shortly after, Lightfoot stymied Lattin yet again, contributing to Oklahoma’s 2-of-14 shooting start.

Perhaps inspired by Lightfoot’s denials, when Azubuike returned to the lineup for him, the first thing the sophomore center did was smack a Young layup attempt out of the air.

• Key stat: Three-point shooting. The Jayhawks were feeling it in the first half and their 9-for-17 success from downtown made a double-digit lead for the final 14:58 leading into intermission possible.

Newman proved to be the most effective marksman, draining 3 of 5 before the break, making the sophomore guard KU’s leading scorer, with 11, in the opening 20 minutes.

Both Mykhailiuk and Vick made 2 of 3 from deep, and Graham made 2 of 6.

Kansas buried 16 of 29 in the victory — the most since making 17 at Texas in late December — with help from Graham’s 3-for-5 3-point shooting in the second half.

• Up next: It’s the most anticipated game on the Big 12 schedule — Kansas at Texas Tech (3 p.m., ESPN). The league’s two first-place teams face off in a game that could decide the conference championship. The Red Raiders won in Lawrence, 85-73, on Jan. 2. 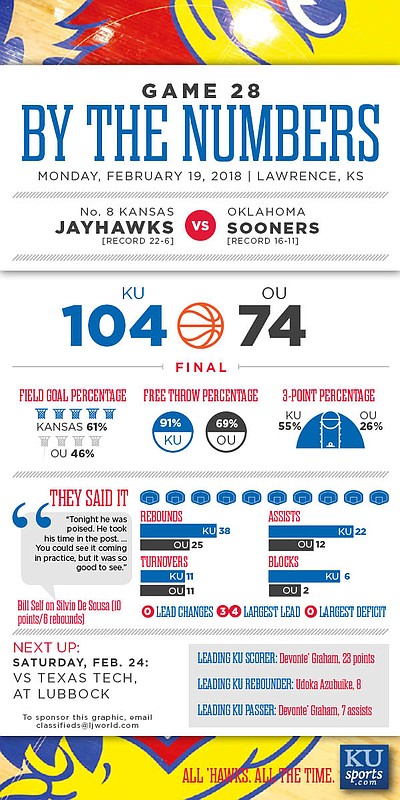 As much as I liked De Sousa's ally oop dunk, I thought his drop step layup was more impressive.

De Sousa looked like his confidence & understanding of what to do/where to be is on the rise. Going forward, if he can contribute 10-15 valuable minutes, it will be huge.

I know OU layed down in the 2nd half, but it felt like this team finally is turning the corner. Solid D, effort and pride. Can’t wait for Saturday! Rock chalk!

that was the best KU has played for an entire game all season....great effort from start to finish by everyone! Desousa played great! hopefully it will give him some confidence going forward. and that 3rd foul on azubuike to start the second half was complete bs.....he was just standing there

Benton, there were 6 Jayhawks in double figures tonight. Doke and Silvio each had 10.

And this is what this team is capable of when firing on all cylinders! Rock Chalk!

That was one of the most satisfying wins of the season. Kansas had not looked that dialed in for an entire game since maybe the Stanford game in Sacramento. Okay, maybe for the first half of the Texas A&M game. The fact that we bludgeoned the Evil Empire and hung 100 on the Laters made it even sweeter.

I actually called it earlier today, it would be like the 2006 games against Mizzou. In the first game in Columbia that year, KU fell from ahead on Christian Moody's missed FTs and lost in overtime. But when the two teams met again in Lawrence, Misuse was in a free-fall, and Kansas pounded them by 33.

Same scenario this season with Oklahoma. We blew a lead on Udoka's missed FTs, and OU won in Norman. But now the Laters are in free-fall mode, and we beat them so bad in the return game in Lawrence that it could never be decided by free throws.

I loved the way all the guys played for the most part, but I especially loved Silvio's play off the bench with Udoka and Mitch in foul trouble. If he keeps growing, maybe Coach Self can expand the main rotation.

Phenomenal defense on Trae Young, holding him to 11. If there's one complaint I have, it's that the rest of the guys in dark red were able to score at will at times, and we got into a game of trading buckets with them. But when you hang a hundred-plus on them, beat'em by 30, and get to see the Sooner Schooner crash and burn in spectacular fashion, if that's the only complaint I have, it's been an awesome night.

Now let's root for Oklahoma State on Wednesday. It'd be nice to have a little extra cushion to work with come Saturday.

Lon & staff needs to watch the '300' movie. It's bloody, brutal, and merciless. That's Kansas!!! Wow.. just wow... Our players were hungry for blood. This is as good as it gets. Congrats to the whole KU coaching staff and the team. This is Kansas Basketball, baby!!!

Did you just call our players lousy actors?

Silvio looked like two different players; from the tentative player he was in the 1st half, to someone who seemed to finally be "getting it" in the second half. It was so nice to see him start to become a player HCBS can start to count on.

It was also nice to see how hard we rebounded for a change, destroying OU 38-25 on the boards.

Revenge, pay back, whatever you want to call it, is really sweet---almost as sweet as my sweet tea from Quik Trip!

I'm curious what would happen if Cunliffe got some meaningful play time. Somehow I just feel he has talent. I hope Self gives him a chance more than garbage time in a blowout.

In the first rout since he became eligible, Sam saw 2 minutes of meaningless time with the walk-ons. The die has been cast, the coaches do not see a future for him at KU. Whatever the final spin, Sam will be off the team next season. The scholarship numbers for 2018-19 say one or two [Langford?] full rides must become available. And, I don't yet see the NBA calling for Dok, Vick and/or Malik in this year's draft, until maybe the back half of Round Two. Right now, only Svi and Graham are getting any second round attention from the gurus. That all said, I may have to change this analysis if we get to the Final Four!

One other thing that no one has commented on: how nice is it to see Sylvio's touch at the FT line? It's rare to see a big man with such a nice touch.

I also enjoyed Dok's celebrating on the bench when Silvio was successful. Big grin, and you don't see that very often.

Looks like we may have another player in Mr. De Sousa. He seems to have a nice touch on his shots. It would be interesting to see him in with another big again.

Oh, and yes, this team can run their opponent out of the gym.

Trae Young, season low points, 5 turnovers with 9 assists, and looked like he was rattled most of the second half. On top of that, wasn't OU something like the second highest scoring team in div. 1, and we held them to 74. Plus, hung 104 on them.

That Young chose OU rather than KU wouldn't bother me, but his comment about taking KU down as part of his decision, well, that didn't set well with me. I was glad therefore, that KU made POY a more uphill battle for him. Devonte made him look like just another victim, and had a far superior game.

Great game you guys....loved the energy and effort....superb!!1...Now Saturday night .....is a TITLE game...its for all the MARBLES.......so get some rest....get focused ...do your Jerod Haase homework and get ready to play championship basketball......if you bring the ultimate warrior mentality and the high energy ....it will turn out the way you want ...We love you guys and are behind you 100%!!!

I hope that Silvio can replicate that performance. It was good to see him look confident and in the game.

Lightfoot desires a lot of credit as his play has improved on both sides the court but it is defense and more precisely his ability to block shots in sometimes spectacular fashion that gets the crowd up and loud.