The collective gasp came at the 11:38 mark of the first half of Tuesday’s 72-47 Kansas victory over Wofford at Allen Fieldhouse.

The groan came later when the video board showed the replay.

After a simple floater by Wofford’s Nathan Hoover fell through the rim, Kansas junior Udoka Azubuike came down hard on his right ankle and rolled it badly, staying down for several minutes writhing in pain before being helped to the locker room by teammates Silvio De Sousa and Ochai Agbaji.

The diagnosis after the game was that the 7-foot, 270-pound junior had suffered an ankle sprain. Kansas coach Bill Self labeled Azubuike as out “indefinitely,” and said there was no exact timetable for his return.

“I don’t know enough to tell you,” Self said when asked for an update. “I know the X-rays were negative and he’s got a pretty significant ankle sprain. I’m hopeful (we can get him back by Christmas), but I think (out) indefinitely would probably be the way to put it because it’s not day to day. He rolled it pretty significantly.” 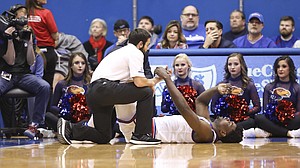 The second-ranked Jayhawks (7-0) played small the rest of the way, with regular 4 man Dedric Lawson at the 5 and Marcus Garrett sliding into Lawson’s spot.

“Marcus will start at the 4, at least moving forward in the immediate future,” Self said. “Unless something unforeseen happens in practice, because that gives us the best chance to spread the floor and have Dedric isolated on the post. I think that’s probably our best bet offensively, and then, defensively, we’ll be better, except rebounding.”

As it turns out, there is a way to cool off Kansas senior Lagerald Vick, at least temporarily.

Vick, who entered Tuesday’s game with Wofford shooting 65 percent from 3-point range during KU’s past five games, did not start Tuesday night after arriving late to shootaround earlier in the day.

Charlie Moore, K.J. Lawson and Mitch Lightfoot all checked in before Vick during Tuesday’s game.

“I actually think he was pleased he was going to play,” Self said, noting that Vick initially may have thought he was facing a one-game suspension. “I didn’t make a big deal of it. He’s been great, but he was late to shootaround. There was no message. … His attitude was terrific. He was a good teammate and he’ll start next game, just so you know.”

To put the hot streak in even more perspective, the closest any player has come during recent years to matching Vick’s 65.1 percent clip during a five-game span was Svi Mykhailiuk, who made 22 of 41 (53.7 percent) during the first five Big 12 games of the 2017-18 season.

Nice to meet you

Midway through the first half of Tuesday’s game, a new face and voice appeared on the Allen Fieldhouse video board. It belonged to new KU offensive coordinator — officially hired Tuesday by new KU football coach Les Miles — and Chip Lindsey wasted no time introducing himself to the KU fan base with the following message: 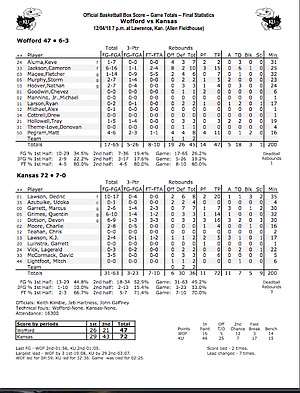 Whiteboards on the court

Rather than try to battle the noise and overwhelming eruptions for which Allen Fieldhouse is known, the Wofford coaching staff utilized written messages scribbled onto whiteboards with dry-erase markers throughout Tuesday’s game.

Wofford coach Mike Young said the strategy, which he doesn’t really love, is something the Terriers have done for years.

“We typically do them all the time,” Young said. “Guys scout so well and it’s harder for (KU) to see, easier for our team to see. I’m not a big fan of it, but it’s something we’ve done for a number of years.”

well, Azibuike being out should make the Nova game more interesting....maybe this will get McCormack some playing time

No point in posting this "in my own words".

If we go 3-23 again from 3 point land, then we will lose. That may have been the worst shooting performance I've ever seen from a KU team. This team has a long ways to go, but I'm confident Self will get them there. The offense doesn't flow. They are one pass and drive right now. No side to side to side to side to entry. It's one pass drive and shoot or one pass entry and shoot.

I can live with a bad shooting night as long as we make the other team shoot worse than us. What I can't live with is the way the other team outhustles us to get the ball. We got our clock cleaned on the glass by Stanford, and against Wofford it was even worse. They snagged 19 offensive rebounds. NINETEEN OFFENSIVE REBOUNDS!!! I realize part of that had to do with Udoka being out with the injury, but still, to surrender 19 offensive rebounds to freaking Wofford is beyond inexcusable, its downright intolerable.

Long rebounds are caused by outside shots which is what Wofford is know for. Long rebounds don't reward you for boxing out. The problem lies within the guards who have crash the boards or at least go after the long rebounds. Also, Wofford got several offensive rebounds when they went over the top of our guys and tipped the ball out to one of their guys. Lawson does a decent job rebounding but when he doesn't jump it opens up the possibility to have someone go over him and tip the ball to a teammate. With Dok being out for who knows how long, we are going to need all five of our guys crashing the boards for rebounds which might slow down our transition offense. But it is a necessity at this point.

Get well soon Dok, we need you!

I was watching this game on ESPN+, and when I saw Udoka go down, I feared for the worst. I was even more concerned when they came back from commercial, and I saw the replay. That replay nearly made me physically ill. The way his foot looked crooked or out of joint, I thought for sure he had broken it. I'm glad it wasn't as bad as it looked.

Time for David McCormack to step up. And it's well past time for the NCAA to get off their cowardly asses and free Silvio!

Silvio might never be freed. He received impermissible benefits and might be deemed ineligible. Although I would think a few game suspension would be the most likely outcome.

Meanwhile, no mention on ESPN or anywhere else about Williamson picking Duke while asking everyone for big dollars to sign with their program. There should be the assumption that Duke paid to get him there and a full-fledged investigation should be underway. Maybe we could get Mueller working on that investigation and quit wasting time and taxpayer dollars on his other witch hunt.

Man... Dok just can't seem to get a break... I was hoping for a complete season from him this time around. I hope Dok has a speedy recovery and comes back ready to get with it!