Roughly nine months from now, when Les Miles coaches his first game at Kansas, the football roster won’t be devoid of talent or experience.

With All-Big 12 running back Pooka Williams, three-year starting tackle Hakeem Adeniji, hard-hitting safety Mike Lee and others expected to return from the 2018 starting lineup, the Jayhawks should have a solid core around which Miles and his staff can build.

Even so, it’s impossible to look ahead to Miles’ first season in Lawrence, where he’ll face a far greater challenge than he did at his previous job, in Baton Rouge, La., and not notice the numerous positions where KU will need to find new starters.

What you make of the split depends on whether you’re a lineup half-full or lineup half-empty type, but in 2019 KU will have to replace 11 of its 22 starters.

On offense, Kansas is losing five senior starters from this past season:

All of them started at least nine games.

Looking at KU’s depth chart of starters and backups, the Jayhawks will also lose three other regulars who were seniors:

On the defensive side of the ball, Kansas will lose two of the program’s most valuable players from the past few seasons: 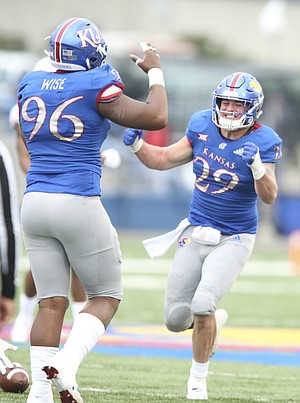 But the list of starting defenders lost doesn’t end there. KU also will have to replace:

Dineen and Wise started all 12 games for the 3-9 Jayhawks, as did Taylor. Loneker made 11 starts, while Holmes had eight. Lipscomb became a first-stringer in the middle of the season and started six of the final seven games.

If all of the non-seniors from the 2018 roster were to return and avoid injury, next year’s team would include 11 players who started six or more games.

The six potential returning offensive starters (2018 class listed with each player) are: 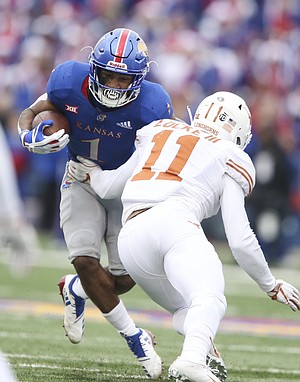 KU’s two-deep (three-deep at quarterback and running back) for offense headed into the season finale versus Texas included 11 non-senior backups:

On the other side of the ball, the 13 non-senior reserve defenders appearing on KU’s published depth chart (three-deep at seven positions) during the season’s final week were:

On special teams KU will lose kicker Gabriel Rui, who exits as the program’s all-time leader in field goal percentage — 78.4 percent success, on 29-for-37 kicking.

Liam Jones, a sophomore this past season, and the team’s kickoff specialist, should step in to replace Rui.

Long snapper John Wirtel also has exhausted his eligibility. Logan Klusman, a junior in 2018, projects as a natural replacement.

A second-team All-Big 12 punter in 2018, Kyle Thompson will be a junior next season.

Les and his staff sure have their work cut out for themselves (for sure).

Actually a lot more talent available right now than a year ago this date.

I would add that We're relatively old at WR and DL so those 2 groups along with center are rather critical recruiting areas. Always need to look for difference makers across the board but those areas have a need for numbers as well.

It will be interesting to see what happens with TE. IIRC we lost Sternberger to A&M (contributing now) a couple years ago because we weren't utilizing him. The reason we had no one returning last year? Wonder if that factored into the 3* from Wichita going to Wiscy?

I've read that the number and quality of 2-deep is the real gauge for the health of a roster. Still work to do but also so far from where we've been.

Excellent and very interesting report. You report numbers that i have been wanting to evaluate. So what this says is that KU's 22 starters played the majority of time in games. Only 11 2nd teamers got to start/play in at least 6 games. This would indicate that KU was basically playing with it's best 40 or so scholarship players

Playing with just 1/2 of the scholarships makes sense....and demonstrates you don't need 85 to put a team on the field. Recently in another article it showed 6 Juniors that didn't play enough that they could redshirt this past year. I hope all the players in that article redshirt. By doing so it would help balance out the roster and KU's scholarships would jump to over 70.

I have no idea which players are good any more, because we've generally been so terrible. But I know Pooka Williams is a bad dude and I'm glad we're getting back a number of OL. Seems to me like DL will be a key.

Brian, you hit the nail on the head. I agree that you don’t need to have 85 to have a team on the field. Those that we are putting on the field need to be top notch.

A huge weakness is the lack of good-quality linebackers.