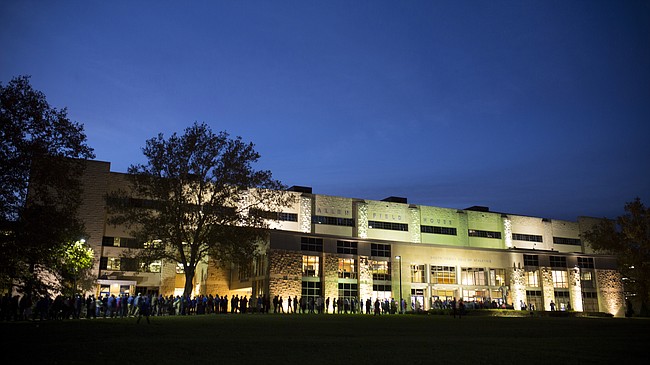 KU alumnus and billionaire investor David Booth made history in September 2017 by pledging $50 million over a five-year period to the athletic department. That pledge showed up for the first time on Kansas Athletics’ financial statements this year.

But because most of the pledge comes with the condition that it be used to improve athletic facilities, the $50 million doesn’t appear in the key part of Kansas Athletics’ finances that show how much money the department has to run its day-to-day operations.

The amount of unrestricted assets Kansas Athletics has to run its operations declined by $5.4 million for the year, according to the recently completed audited financial statements of the corporation.

This year marks the second in a row that Kansas Athletics — which is its own nonprofit corporation but is wholly owned by the university — posted a loss. In what has become a multiyear trend, the department is seeing expenses grow faster than revenues.

Athletic department spending for the fiscal year that ended June 30 totaled a little more than $110 million, up about 9.5 percent from last year’s spending. Revenues, however, totaled about $105 million and grew at a rate of about 5 percent. As part of a series earlier this year, the Journal-World reported that from 2006 to 2017, athletic department spending grew by 93 percent while its revenues grew by 68 percent.

A spokesman for the athletic department did not respond to a request seeking an interview with Athletic Director Jeff Long, nor did the spokesman respond to questions that were emailed to the department on Monday.

Booth’s gift, the largest ever to KU Athletics, was supposed to spark a major fundraising campaign to build about $350 million worth of athletic facility improvements, with about $300 million of them devoted to the football stadium.

Instead, then-Athletic Director Sheahon Zenger got fired in May after Chancellor Douglas Girod cited a general lack of progress in the department. Long, Zenger’s replacement, fired football coach David Beaty last month. Long hired former national championship coach Les Miles and has stated that he wants to focus on building on-field success with the football program before undertaking facility upgrades, although work is underway on a new indoor practice facility.

Another part of the report shows how reliant the department has become on Booth, who grew up in Lawrence but now runs an Austin-based investment fund. The financial statements note that in fiscal year 2018, 58 percent of all contributions — both those for building projects and operations — came from one donor, presumably Booth. Looking forward at contributions the department is scheduled to receive, 71 percent were scheduled to come from one donor, according to the financial statements.

Other items shown on the financial statements include:

• General contributions also were up compared with a year ago. The department collected $21.5 million in unrestricted contributions, which often include premiums paid to the Williams Fund in order to qualify for certain ticket plans. The $21.5 million is up about 17 percent from $18.4 million in fiscal year 2017.

• Sponsorship and royalty payments took a big jump in the fiscal year, even though a multimillion-dollar contract extension with Adidas still remains unsigned as the company has been drawn into a college basketball recruiting scandal. Sponsorship and royalty revenue grew to $16.5 million, up from $11.8 million the previous fiscal year. Pat Kaufman, the chief financial officer for Kansas Athletics, previously has said KU received about $1.5 million in extra royalty payments from Adidas based on the pending contract extension. When the Journal-World questioned the department about that extra money, it declined to answer questions about the new Adidas funds. It is possible those funds haven’t actually been received, but rather are showing up as an accounts receivable — in other words, money Kansas Athletics expects to receive. The athletic department’s accounts receivable line item is about $3.4 million larger than it was a year ago. The Journal-World has asked the department where the extra Adidas money is shown on the statements, but hasn’t yet received a response.

• Salaries in the department — which has about 215 full-time equivalent employees — totaled $40.8 million, up from $36.1 million in fiscal year 2017. The increase does include severance payments to Zenger upon his termination, but it doesn’t include any severance cost related to the firing of Beaty or new costs related to the hiring of Miles and his football staff. Those costs will show up in the fiscal year 2019 statements.

• KU Athletics has about $30.2 million in cash, investments and other financial assets that it could use immediately, if needed. The financial statements measure the department’s liquidity, which is defined as money that could be used within a year or less. In total, KU Athletics has $137 million in cash, investments and pledges, but most of it has donor restrictions or other issues that prevent it from being used immediately by the corporation.

• Kansas Athletics again received $1.5 million in money from the University of Kansas’ general operational fund. That amount is consistent with what KU provided in fiscal year 2017. Faculty leaders at KU have asked the chancellor’s office to discontinue the general funding to the athletic department, as the Lawrence campus undergoes about $20 million in budget cuts. Thus far, the chancellor has not committed to end the funding but has said it will be reduced by about 6 percent.

Haven’t seen anything for quite a while regarding expectations of decreased donations from every day Williams fund donors now that contributions are not at all tax deductible for 2018. Lot of people paid up prior to 12/31/17 for donation year ‘18, to get the deduction. This year is where that pain will be felt. Have to think there will be some kind of hit.

Tax reform didn't removed deductions for donations...and in fact it made them more attractive for upper income taxpayers since the deductions are not limited to 60% of income...rather than 50% of income.

For large donors, yes, but if you gave $5000 last year, you could have deducted $4000 of that. If you receive priority points for that donation, this year you can't deduct that. I think there will be a certain number of donors that right size their donation to adjust for what they are not recouping on their tax return...I've talked to some that are just simply unwilling to donate if there's no deduction.

The answer to this problem is to sell football tickets.

71% of contributions came from Booth. Sheez. I shudder to think of what might happen if something was to happen to Booth's business or he decides to stop generously giving. That is putting all of your eggs in one basket.

Wow! A 13% rise in salaries. My guess is that the rest of the university employees did not do quite that well. Maybe professors in big lecture classes should start putting Adidas logos on their powerpoint presentations.

I'm sure there's more to this number than meets the eye but that seems excessive . . . even if you assume Bill, Beaty and 3 other highly compensated employees get $10 million a year that still nets out to $142,000 for the remaining 210 employees.

They doing any hiring?

Jay - Do you think there might be more than 5 people making more than the average salary? If there's a 20% change when you give more thought to 2.5% employees imagine how much more reasonable things could be with just a little more thought. But it's easier to throw stones and be ignorantly negative.

And shame on LJW for pandering the slime. It is no wonder they don't want to talk to you.

I'd guess that more than 5 people make more than the average but I have no idea how to calculate that. Any help with what the breakdown is per employee would be information we'd love to know. Thanks for helping us with that. I'd like to be more positive about what I'm reading :)

Dirk, It is neither ignorant nor negative to question a large rise in the salaries of athletic department employees that are way out of proportion to the rest of the university. Kind-of the tail wagging the dog. I personally believe that if the athletic department is going to make believe they are part of the university they should turn over a % of their fat cat donations and corporate "sposorships" (talk about slime) so that people who are researching treatments for MS or ways to improve farm productivity have labs that look 1/2 as good as the locker room for our pathetic football team.

Jay - For public institutions, salary info is public records. I don't have that info and wouldn't expect you to have it either. It appears that you bit on the LJW manipulation and word play to be dramatic and catchy. It tabloidish imo and sad.

Larry - Are you sure the athletic department salaries are out of line with the rest of the university? The article presents absolutely nothing about university salaries and very little about AD salaries; just the budget line. As previously stated, there's a huge difference between salaries and budgets though LJW wants to blur and mislead in that regard.

Question away, but I'd suggest getting more than tabloid info first.

Larry - You also apparently believe that fat cats only contribute to athletic departments. This must be true because the LJW hasn't written any stories about donations to architecture, entomology, education, or other schools. If you dig a bit more you might find that giving to scholarly interests correlates strongly with giving to athletics.

It is amazing that some people keep biting at the same decades old worm dangling from the hook.

I hope some cut back as I would like to improve my seat location.