Jayhawks think each of the top 3 RBs could be ‘explosive’

Headed into the 2018 season opener, three Kansas running backs are in contention to start, and all three figure to be a big part of the Jayhawks' game plan this fall. Pictured, from left, are junior Khalil Herbert, sophomore Dom Williams and freshman Pooka Williams.

Next to "running back" on the Kansas football team’s published depth chart this week, you can find the names of three players, each separated by an “or.”

When the Jayhawks make their season debut Saturday against Nicholls State, the starter might be junior Khalil Herbert. Or it could be sophomore Dom Williams. Or just maybe true freshman Pooka Williams will be the first to line up in the backfield.

With three players presumably in the mix for that job mere days ahead of the opener, would it be safe to presume all of them will get similar amounts of snaps or carries?

“I’m not sure how that's going to go, but there's not going to be a guarantee on how many touches they get. It's going to be based on matchups, skillsets and what we need them to do,” KU’s fourth-year head coach said. “Some of them catch the ball better out of the backfield. Some of them pass protect better. Some of them need to carry the ball in certain situations versus a certain front.” 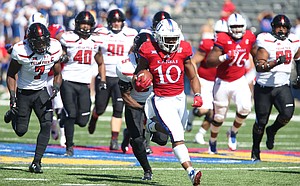 True freshman Pooka Williams enters week one (6 p.m. Saturday kickoff at Kansas David Booth Memorial Stadium) as one of the most highly regarded recruits the program ever has been able to land.

But, according to Beaty, he and his staff have yet to peg any member of the trio as the go-to back.

“I really can't predict how many carries this guy’s going to get, how many carries that guy’s going to get. Whoever gets the carry, he's got to get the job done,” Beaty said Tuesday at his weekly press conference. “The good news is they are all similar in that, in terms of the fact that they all have explosive playmaking ability. Every one of them.”

KU’s coaches are so approving of their running backs that they didn’t even enter preseason camp planning on one emerging as the clear-cut No. 1 option. Offensive coordinator Doug Meacham predicted a couple days into August that the Jayhawks wouldn’t end up with a featured back.

“I think it’ll be by committee. There’ll be several," he said. "Because we’ve got three guys you can put in the game.”

Herbert’s massive outputs early last season — 137 rushing yards and two touchdowns at Ohio, followed by 291 yards and two more scores against West Virginia — made him the most likely frontrunner at the position. 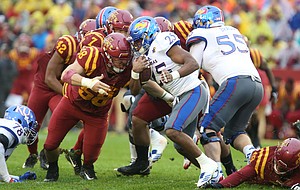 Kansas running back Dom Williams (25) is hit by Iowa State defensive end J.D. Waggoner (58) on a run during the second quarter on Saturday, Oct. 14, 2017 at Jack Trice Stadium in Ames, Iowa.

A 5-foot-9 210-pound junior from Coral Springs, Fla., Herbert’s production and effectiveness dipped as a sophomore following a hamstring injury in the fifth game of the season.

In order for the offense to reach its optimal level this fall, the Jayhawks likely need a healthier Herbert for the full schedule.

“He’s a little bit different style, bigger guy. You hate to lose that style of runner,” Meacham said. “Because you have to prepare for a bigger guy, and then to prepare for a smaller, slash-ier, little guy, it just gives you another dimension.”

Sophomore Dom Williams is listed at 5-10, 195 pounds. Pooka Williams, a 5-10, 170-pound freshman from Louisiana, garnered a four-star rating from Rivals as an all-purpose back at Hahnville High, where he accounted for 3,118 yards and 37 TDs as a rusher during his senior year.

Having so much talent at the position, Dom Williams said, should benefit each of them.

“I feel like it’s good to have a lot of depth at back, because not only one person is going to get the job done," he said. "And since we’re all just so different, we all bring something different to the table. I feel like we’re going to have a good mix between all of us.”

One trait that the three backs share, the sophomore form McKinney, Texas, added, is their vision. Dom Williams shared that each has impressed at times during practices while getting repetitions with the first-string offense.

“We do a good job in rotating each other out so that we’re fresh,” he said. “We can kind of tell. We’ll either rotate each other out or even some practices, we’ll keep each other in to work on conditioning.” 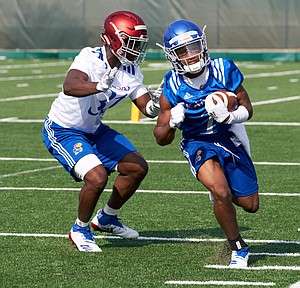 Both coaches and players have made sure this month to remain vague while discussing in interviews how the backs will be involved offensively, but Beaty also has praised Dom Williams for looking like a different rusher than he did a year ago and putting himself in position to challenge for the starting job.

Each running back is intriguing enough in his own right that the Jayhawks hope it won’t matter which one opens the first offensive series in the backfield. The plan seems to be to involve them all.

Meacham explained how a true freshman could factor into the game plan immediately.

“Pooka’s in there and you pack it all in there and you toss it to him, he may outrun everybody, or any of those other guys,” Meacham said, before explaining how Herbert would provide a contrasting style for opponents.

“Khalil hops in there and he can hurt you inside and/or outside,” the coordinator said. “They both catch the ball really well from what I can see.”

Whomever starts against Nicholls, that same distinction could go to one of the other two backs each week depending on matchups and how the season plays out.

“That could be true at just about any position, particularly in the skill,” Beaty said. “For us now, we have enough depth that that could happen. The good news is, we don't feel like we're dropping off any at that position, once the first guy comes out. So we’ve got a luxury we haven't had, which allows us to keep a high amount of competition going, which is your friend, for sure.”

These impressive young men could make All Conf levels if they were being coached by another staff. Hoping we can keep them around after this year and looking forward to how a competent coaching staff can boost them to their full talent levels next year and beyond.

I'll tell you what I see. Beaty is very reticent to single out a guy as being the top dog in his position group. His comments at press conferences are no doubt echoed in practice, and seems to me, at least, to be an attempt to placate those that are not King of the Hill. Bill Self doesn't do that. Hit these kids with reality. Let reality sink in. By telling these kids that they're all pretty much equivalent, you don't spur growth and effort. On the other hand, if you hang a flashing neon sign above their consciences that they're number 2 (or 3), then you make them realize they have work to do to get better and you draw out that effort.

Stop coddling these kids! Our improvement depends upon it.

This is the one position group I'm fine with Beaty splitting the reps evenly in practice with. It'll help keep all 3 fresher than if there was just 1 back taking all the reps in practice.

The problem is, Beaty doesn't just do it with the running backs. If you look at the depth chart, and all the "OR"s in it, you'll realize his handling of ALL the position groups stems from a mentality of coaching. Twenty times, the word was used! Therefore, it is both more reasonable to assume and more likely that Beaty has not used the logic you are using here, and that he is either himself a victim of indecision, ineptitude with respect to judging talent, or both. It's not that I don't understand that splitting reps between running backs has its advantages. Occasionally you even see it on the professional level (the Chiefs have done it SEVERAL times). Furthermore, and to your point, college football seems to be employing the committee approach to RBs recently. Alabama will likely use it this year. But again, the sheer number of times that Beaty employs the "OR" indicates that if he's found the right approach with respect to the running backs it was more luck and less genius and, back to the point of my comment, he is still probably not encouraging the kind of mental competition among running backs, as well as other groups, that is required to increase performance. That's the issue here. "Is he coaching in a way that is going to make Kansas better on the field?* The answer is no if you have a coddling mentality (Mangino clearly did NOT). I would have loved to have been a fly on the wall when the depth chart was being created, to hear the logic that went into the use of all of the "OR"s. They name the guy and the number 2 is delineated--even at the running back position and even when the committee approach is used. I mentioned that Alabama will likely use a multiple-back attack this season. But here is their depth chart:

I agree about the rest of the depth chart. Positions like QB and OLine is vital to name the starters early and start building the chemistry between the players and Beaty has been terrible at that so far. RB is the one position group where not naming a starter and splitting reps is okay because it's what most programs already do because that's the position where you need the most depth.

Can we run the wishbone with three the RBs, mix in Kendrick and it would be interesting?

How about staff writers predicting attendance on Saturday....Just as painful as talking up 1 to 3 wins!

The 1st 20 minutes of the Nichols St game may say it all about this season.

What's sad this is probably the best of the three games...

We get down 21 at the half and we'll never see these guys. I think we almost have to learn to run the ball regardless of the score. We get into a throw on every down and a string of 3 and outs with a tired defense in the 2nd half, it will be Nicholls State fans and our cheerleaders left in the stadium at the end. There will be officials on the field than KU fans.

Hey, LJW, y'all should be ashamed for letting an ad insinuating Kevin James has died on your website. On top of that, it's a GD boner advertisement. Let's have some standards, please.

Sorry for the distraction, fellas, but crap like that really ticks me off.

Those ads are based on your cookies, LJW doesn't control them.