Tom Keegan: One depth chart not a death sentence for nonstarting newcomers

Kansas freshman cornerback Corione Harris smiles as he pulls on his helmet during practice on Monday, April 23, 2018.

Familiar names on a depth chart, particularly for a football team coming off a 1-11 season, can breed contempt in a fan base. Understandable, but before jumping off the Kansas football bandwagon — or is it a unicycle? — calm down and consider a few mitigating factors.

Remember, this is the depth chart for the first game, after which 92 percent of the season will remain. New names will move up and replace some of the old ones in time. It’s bound to happen. Be patient.

It’s far too early to conclude that the defensive recruits from junior colleges you have read so much about are busts simply because none of them are starting against Nicholls State.

Not that I think recruiting jucos is the way to go. I don’t. I believe in building programs mainly through amassing high school recruits, starting in the home state and fanning out, but that’s a separate issue. All I’m saying here is don’t give up on newcomers simply because returning players are starting ahead of them Saturday.

Ten of 11 players listed as starters on defense were on the team last year. Defensive end Brian Lipscomb, a graduate transfer from an 0-11 VMI squad, is the lone newcomer. 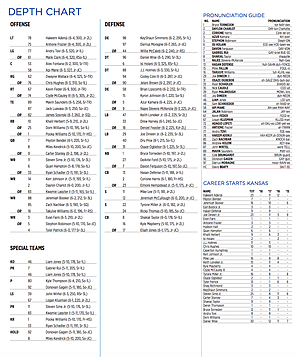 Coaches view football players a lot like we all used to view new baseball gloves. We wanted to make sure they were broken in sufficiently in practice before wearing them in Little League games. Too risky to use a glove that’s still too stiff. So we stuck with our trusty old mitts, warts and all, until we were certain we had pounded the pocket of the new one enough times.

My guess is defensive coordinator Clint Bowen has more confidence that at this point his returning players are more likely to be sound. He’s still not convinced of that with newcomers, some of whom might be more capable of matching up with Big 12 athletes than some of the holdovers. In the opener, he wants players who will carry out their assignments, which in theory anyway should be good enough to defeat a school ranked No. 17 in the country in the FCS.

In the first game, more than any, coaches make conservative personnel decisions.

Sure, it would have been more exciting, might have even sold a few more tickets, had Louisiana freshman cornerback Corione Harris been listed at the top of the depth chart instead of Shak Taylor, but Bowen’s not trying to win a popularity contest or sell seats. He’s trying to win a football game. At this point, the DC obviously feels more comfortable banking on experience than pure talent.

KU ranked 129th among 130 FBS schools in points allowed (43.4) in 2017. So boasting about having 10 returning starters in a sense is akin to trying to make a boy who’s been playing baseball all summer excited about the return of another school year.

But just as every year of schooling makes you smarter, every football player should become better with another year of physical and mental training. So there’s that. Also, 12 newcomers (11 juco, one high school) are listed as possible backups on defense. The word possible is necessary because 31 names were listed for the 11 positions. Although it’s called a two-deep list, it’s actually more like a three-deep without knowing which players are on the second string and which are on the third, thanks to the word “or.”

The preference given to starting returning players on defense over newcomers stood out most at first viewing of the depth chart, released Monday night. The next thing that grabbed me was that the Kansas defense is built on recruits from junior colleges first, high school players second. Of the 31 players listed, 17 came to Kansas from junior colleges, 13 from high schools, one from an FCS school.

Turning over the roster every couple of years generally doesn't work. Building with five-year players and two-year additions sprinkled in sparingly requires patience, but still is the way to go.

Keegs, I agree with you that building a program with high school kids is the way to go, but I am not sure you are clearly seeing the picture of KU football. Maybe you have an inside track tot he coaches, or to the minds of high school players that we don't know about or about which you have not drafted a story. I believe Beaty knows and understands that high school kids are the way to go, but I bet he has a plan. Maybe there aren't enough talented high school kids, and Beaty doesn't want to take high school kids just to take them. It is hard to recruit to Kansas. We all know that. At the same time that coach has to build for the long term, he also has to have bodies on the field, and sometimes that means more JUCO recuits than high school recruits.

His plan is to save his job so he loaded up on players he thinks can help this year without regard to the future. Just about any coach in his shoes would have done that and because Zenger's job was tied to Beaty's success, Zenger allowed him to do that without putting any restrictions on the number of transfers he could take. Not a tough one to figure out.

This is the football equivalent of custers last stand!

And when the local media continually talks publicly about his coming firing and even publishes articles showing possible successors, well, a guy is likely to do what he has to do to save his job. For now, at least.

Fact: Those stories came well after signing day. He's 3-33. Do you really think recruits need to read the paper to find out that a 3-33 coach's job is on the line? I mean, do you honestly believe that? Honestly?

It's clearly Tom's fault that Beaty is 3-33. If Tom would have written more fluff pieces on the fluff coach he would have won more. I don't know how Keegs can even look himself in the mirror after blowing all those games like he did. Rigged!

Don't worry after the first play, Beaty will second guess himself and switch positions, and then switch back once he considers what he started with.

Fact of the matter is, with all of these JUCO and band-aids, it doesn't look like any of them are replacing a complete disaster of a defense last year. 129th of 130th is not a great defense and there needs to be an upgrade. I find it doubtful that the same core with backups from last year will end up shooting this defense into the next quartile.

Plus Bowen is our DC.

The next coach needs to dump Bowen. I love that he's a jayhawk and loyal. But come on. The D's under him have been horrible

You think any new coach would even consider that an option?

Great guy and DB position coach. Just not a coordinator of HC unfortunately.

Let's not forget the near record number of 3-and-out possessions when evaluating the defense. If the offense is going to be as bad this year as they were last year it's not going to matter if the 85 bears are lining up on defense it's still going to look terrible on paper.

There is NO doubt that Beaty has to win in order to keep his job. Kansas has limited potential players capable to play Big 12 teams. K-State will grab some so elsewhere hard to get em. It is highly possible juco players that sign may be better than freshman that might agree. Just to say hey fire him and the next coach has the same problem. For KU to develop a winning football team won't be easy.

I thought that last year, he didn't win and he kept his job.

It won't be long before we start seeing some real progress. I can start after the holidays.

Funny how none of these articles appeared when Charlie Weis was allowed to dismiss 19 scholarship players in his first 2 weeks on campus which is the single point of time that started this mess. “Journalists” and “ “ phans are funny