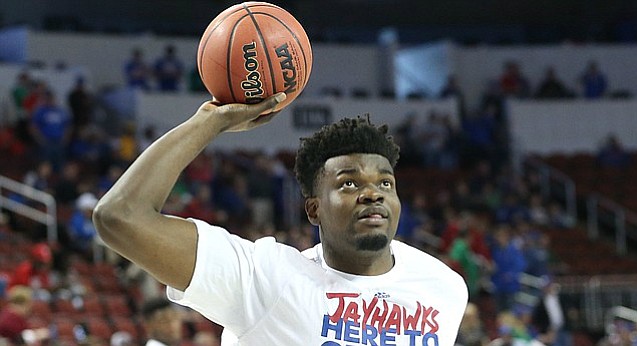 Kansas sophomore Udoka Azubuike prepares to shoot a layup in pregame warmups Saturday before KU's game against Seton Hall in the second round of the NCAA Tournament at Intrust Bank Arena.

After two seasons and 47 games as a Kansas Jayhawk, sophomore center Udoka Azubuike is at least curious to hear what NBA evaluators have to say about his game.

Azubuike, who started 34 of KU's 39 games this season and improved his numbers across the board from his 11-game injury-shortened freshman season, has decided to test the NBA waters by entering the draft process.

Azubuike will not hire an agent, leaving open the possibility that he could still return to Kansas for his junior season the way Svi Mykhailiuk did one year ago.

"I want to declare for this year's (NBA) draft, but I am not going to hire an agent," Azubuike said in a statement released Friday morning. "I'm going to wait and see where I stand among other bigs out there. I appreciate everyone's support, but I'm not saying goodbye. I'm saying I want to find out. Like many other players, I'm curious."

Added Kansas coach Bill Self: "Udoka has been thinking about this since the end of the season and he feels it's in his best interest to declare and test the waters, which we as a staff totally understand and encourage him to do. He's leaving the option to come back. 'Dok has improved a tremendous amount this year and we all look forward to seeing how his progression is until it is his time to make a decision on whether to stay in (the draft) or pull his name out."

Azubuike beat the early entry declaration deadline by two days and, according to a KU press release, will have until May 30 to pull his name out of the hat in time to return to school.

That means the next seven weeks will be very interesting for the 7-foot, 280-pound center from Nigeria who averaged 13 points and seven rebounds in 23.6 minutes per game last season for the Jayhawks. And the featured event during that time will be the NBA's predraft combine, May 16-20 in Chicago.

It remains to be seen who gets invited to this year's combine, but it's entirely possible that six Jayhawks who were on KU's opening day roster in 2017-18 could be there — Azubuike, Mykhailiuk, Devonte' Graham, Malik Newman, Lagerald Vick and Billy Preston.

Last year, Mykhailiuk received his combine invitation four or five days after the declaration deadline. If that timeline holds true this year, the group listed above should know something about the combine by next Friday or Saturday.

Throughout his time in charge of the program, Self has had one rule about players declaring early for the NBA draft — if you're going to do it, go all in.

“I do think the guys that test, they need to jump in headfirst to try or they’ll go and they’ll look bad,” Self said a year ago, after Mykhailiuk announced his plan to test the water.

The idea behind Self's thinking is simple. Rather than going through the process just to hear feedback and feeling comfortable about having a safety net behind them, any player who declares early stands to do himself the biggest favor by really going for it. In addition to putting one's best foot forward, that mentality also allows NBA scouts and executives to see the best version of any given player, which will produce the best feedback they can possibly get.

Azubuike, who led the nation in field goal percentage with a 77 percent mark from the floor during his sophomore season (of his 211 makes in 274 attempts, more than 100 were dunks), has plenty of strengths to put on display during the coming weeks, with his size and above-average athleticism for a man that big chief among them.

But it's his weaknesses — which will be worked on nonstop, as well as on display and picked apart during the coming weeks — that likely will determine whether Azubuike stays in the draft or elects to return to KU.

Included among those are his shooting range, free-throw shooting, post moves and ability as both a consistent rebounder and rim protector.

"I improved a lot this past season," Azubuike said. "All my teammates and all my coaches have helped me to grow in all areas of my life and I really appreciate what they did for me to get to this point."

If Azubuike returns to Kansas for another season, he will be a cornerstone of everything the Jayhawks do during the 2018-19 season. If he decides to turn pro, his departure will mean that the 2018-19 Jayhawks will be replacing all five starters from this season's Final Four team.

Dok needs to be shooting 100's of freethrows each and every day. That's one of the major improvements he needs to work on (no matter if he's staying or leaving). I still believe that we will see him in Crimson and Blue next season.

it only makes sense for him to do this..but I suspect the feedback he will get will be enough to send him back to lawrene

just nobody send a car for him please..dont need the idiot NCAA declaring that an immpermissible benefit lol

It was a good choice for Svi last year. I hope for an outcome that works out best for Dok in the long run. He's still very young.

While I know that Svi doesn't regret coming back, the mock drafts seem to indicate that he only improved from being likely undrafted to being a mid second rounder.

I would say that as a second rounder you are much more likely to sign an NBA contract than as an undrafted free agent. But it seemed like he could make the jump to being a possible first rounder based on his size, skillset, and shooting ability. If I were an NBA GM I'd give the kid first round consideration. He is 6'8" a good ball-handler, a decent passer, a very good shooter, and an OK defender. He works hard and has improved year after year, and he'll just barely be 21 on draft day.

He got close but never made that next level jump needed to climb higher in the draft.

Although freethrows stick out as a weakness. I think it trended up on that line. I think what NBA scouts will want to understand is his range. Even at the 5, more and more coaches want to see the 5 stretch the defense. Currently, I would be surprised if he has the range of more than about 8-10 feet. The great news, is when he is in the interior he shoots a super high amount. I just think that the range will be his hindrance.

I think he has been outstanding for KU especially since he really hasn't had a chance to play with another big man. I look forward to next year if he is able to stay, to see how he does with a big man and interior passing.

Either way we have been super fortunate to have him and look forward to any extra time we get with him.

Dude has no business going to the NBA. His game is still underdeveloped after sitting out half his freshman year with the broken wrist. Yeah, he has some intimidating jams; but he struggles mightily with free throws, his footwork needs improvement, and his defense needs work too. He needs to come back to KU.

And, no offense, but he needs to hear it from NBA personnel, not you.

Is defense really required in the NBA?

You've got to be kidding. They play literally the world's greatest defense in the NBA.

If you watched NBA basketball, you wouldn't need to ask that question.

I think he's crazy if he leaves. If he does go his NBA career will be short. He will end up playing in Europe. Test the waters, see where you need improvement. You are young and can do nothing but get bigger, better and stronger. I believe he's only 19 and his time to shine will come. I don't want to see another young kid make the jump just for the $$ and then regret it later. He's got so much raw talent and Self will only make him better. Yes I'm speaking from the "we need him standpoint" but that aside I want what's best for him.

Want to hear something scary? He's still only 18. Won't be 19 until September.

The so-called tryout games Udoka will play if he is selected will be a disappointment. Those guards will not feed the post players as Self demands. Hey we need to impress by our shooting. Nobody will appreciate passing to the post. Hey I'm thinking Udoka will be back next year after the tryouts.

I just don't see this being the right time. I can't see him being a first rounder. No NBA team wants a hack a shack center. He needs to get that fixed to at least be at 60-65%. And he need some shot other than the dunk. If he improved those two areas, he would be a legit first rounder. Going in the second round would all be about which team and if he got a break to get minutes. Too risky. I'd advise him to come back. But this move did help Svi improve a lot, so who knows.

Could we once again be thin in the frontcourt? Lawson, McCormick, and Lightfoot. Silvio is gone and Udoka might go for the money.

Last year we expected Bragg and Coleby to return so it's happened before.

Only now, we have completely no real backcourt experience except Garrett.

Though I think Dok will be back at KU next season, if worst case scenerio he does stay in the draft, the front court next year still wont be as thin as it has been the last 2 seasons..McCormack, Dedric and Lightfoot is still better than Lucas/Bragg/Coleby....Im hoping we get the best case situation and get Dok back AND a fully cleared (again) DeSousa

I agree. I think Udoka is doing the best thing but my pessimism gets the best of me around bedtime. It seemed so recently we were discussing a redshirt for Lightfoot.

Any 5th-year grad students available? Ryan Luther from Pitt was a solid player. 6'9 215 or Connor MacDougall from New Mexico would block any holes in our frontcourt.

I'm sure Udoka will be be back, but I seriously doubt Silvio will. It sure would be great if they could play together on the court at the same time. That would be a fierce front court next season.

Little did I think that there would be the distinct possibility that we could never see that combo on the court at KU. Someday the NBA but never in Allen.