According to Kansas football coach David Beaty, this off-season he and his staff have and will continue to confront “a lot” of areas where the program needs to improve.

Beaty described one such goal as morphing the Jayhawks into “the toughest team” in the Big 12.

“We've got to become a tough team. And toughness doesn't mean you stand out there and fight with gloves on for us,” the fourth-year Kansas coach said. “It means you're tough enough to be able to focus and lock in and not have mental mistakes.”

Beaty also declared they haven’t abandoned the “earn it” mentality he has reiterated time and again the past few years.

“It's what we started with, and it's certainly good enough,” Beaty suggested of the slogan. “We're going to continue to focus on that.”

Of course, the ultimate objective is for KU to “get better faster,” and Beaty said his staff plans to accomplish that by demanding closer attention to alignments and assignments.

“Being really focused on that, which is what we're putting a lot of time into,” he said.

Trying to bounce back

No one within the Kansas football complex thought the 2017 season would go as poorly as it did. 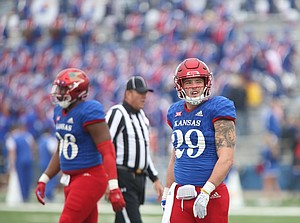 What the Jayhawks hoped would become some form of a breakthrough year for the Big 12’s ever-struggling program turned out to be an 1-11 endeavor.

Appropriately, according to players, workouts and practices since then have come with the added element of past frustrations fueling their preparation.

Redshirt junior quarterback Carter Stanley said it was fair to characterize the Jayhawks as fed up with losing, adding he noticed that vibe from the start of winter workouts.

“Obviously last season didn’t end the way anyone wanted it to,” Dineen said. “For us to have the opportunity to go back out and practice it’s just another opportunity for us to try and get better and move this program forward.”

When spring football commenced without Mesa Ribordy, it was hard for the players, particularly the quarterbacks, not to miss the team’s former starting center. 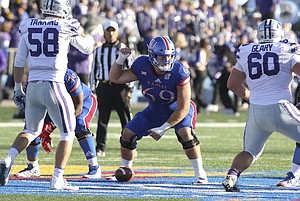 “I think losing him is definitely a big loss, him being one of my closest friends it was hard to see that happen,” Stanley said of concussions forcing the would-be junior offensive lineman with 21 career starts into retirement. “I think (offensive line coach A.J.) Ricker and the O-line, they’ve done a great job already trying to fill his spot back in.”

Junior Andru Tovi has emerged as a likely replacement for Ribordy at center, and Stanley said the 6-foot-3, 320-pound lineman has “done a great job” up to this point.

“Last year playing guard the whole year, he’s made a pretty easy transition it seems like,” Stanley said, “and he seems pretty comfortable.”

Although Ribordy won’t play again, Beaty said the Louisburg native remains a part of the program. The coach pronounced the center’s retirement as a sorrowful moment for the team, because of the center’s leadership and importance.

“But the great thing of it is the kid has a great forecast for a terrific life. That's the number-one thing,” Beaty said.

“I’m sad for Mesa,” he added, “but I'm so happy for him that he's going to be able to be a great father, a great husband, as we move forward, because it's just not worth it for their health (to keep playing).”

Toughness begins with defense. That is, you proclaim that you will not allow teams to score an FBS-worst 45 points/game against you. It starts with not allowing an FBS-worst 68 TDs in 12 games. Talk is cheap. Hard to be tough when you're down 30 points at halftime every game. It's tough when you let CMU score 45 points in Lawrence & you allow another 39 points to a winless Baylor team. But, alas, we gave our D Coordinator a handsome raise for his FBS-worst efforts, so this dumpster fire will continue.

Would that help w wins?

Defense begins with offense if we could actually have our offense out there for more than 3 plays at a time maybe we give our defense a chance to rest. You have are guys out there no for 9 10 11 12 plays then the offense comes in for 3 then its right back out there again with probly a minute's worth of rest how can you expect that from any diffense. Our defense is bad but the offense or lack thereof contribute to it.

Earnit...beaty not one incentive earned in his heavily incentivized contract.

Good thing in his fourth year the team has heard the message of being fed up with losing and has a new plan to win.

If Bowen is our DC, toughness will not be present.

Bowen has no clue how to run a defense. And anyone that disagrees, the proof is in the pudding. Take a look at the performance measures of his defenses on an annual basis. I guarantee he has the worst ranking defenses of any DC in all of college football.

Beaty has 4 games left in his HC coaching career at Kansas. After a home loss to Rutgers and a blowout loss at Baylor Beaty will be relieved of duties and Meachum will be named interim HC for the remainder of the season.

I am in no way happy with the results of Beaty's last 3 years here but I have a hard time thinking of other coaches out there who would actually want to take this job. I feel Beaty truly cares about Kansas and wants them to succeed I also feel that he is learning how to be a head coach on the fly. Who are some guys that realistically would jump at a chance to take over this program? For now I will continue to support Beaty and hope he can get this thing turned around. When you hear former players talk about Beaty and how hes trying to build something the right way I cant help but want him to succeed. I am tired of the losing and it becomes harder each week to watch when we are consistently getting down early in games. For now at least I will continue to support this staff and hope some REAL changes are being made and no more bad alignments and missed assignments can happen. If and when we ever find a QB this team will turn a corner. As for defense I would love to see Robert Topps III as the opposite corner to Harris he has good size and I have been high on him since he signed. Hopefully we can get our defensive struggles figured out I'm excited to see the impact Bill Miller has on this program.

I truly care about Kansas and want us to succeed. That doesn't mean I could be the head coach of the football team ...

Thats fine i just want to know some rumors of who our next coach could be then....i dont think many people want to come here

It is still (barely) a Power 5 school and you cannot possibly do any worse than 3-33. You can't.