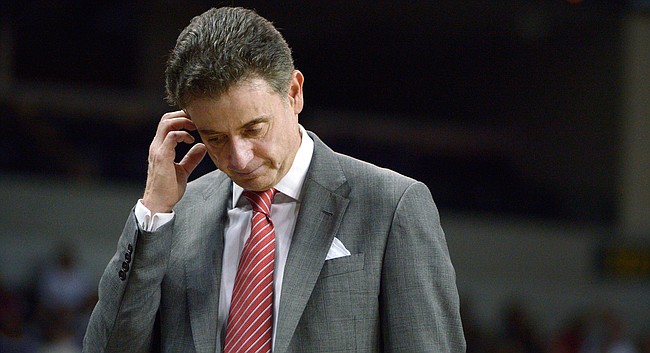 In this Dec. 31, 2013, file photo, Louisville head coach Rick Pitino walks in front of the bench during the second half of an NCAA college basketball game against Central Florida in Orlando, Fla. Louisville announced Wednesday, Sept. 27, 2017, that they have placed basketball coach Rick Pitino and athletic director Tom Jurich on administrative leave amid an FBI probe. (AP Photo/Phelan M. Ebenhack, File)

An expert in white-collar crime cases said one group should be particularly on guard as federal investigators dive deeper into the college basketball world: prominent coaches.

“What you are going to look for in this next wave is the really high-level coaches,” said Bill Black, a white-collar criminologist and associate professor of economics and law at the University of Missouri-Kansas City. “It can move incredibly fast and may already be in motion for all we know.”

Bill Self discusses "a tough week for college basketball"

Bill Self discusses "a tough week for college basketball"

The investigation already has led to the dismissal or suspension of a handful of high-level college assistants, one freshman student-athlete and, ultimately, Louisville basketball coach Rick Pitino, who is on unpaid leave, and athletic director Tom Jurich, who is on paid leave. The University of Kansas has not been implicated in the probe, and federal officials have not contacted the university, a spokesman said earlier this week.

But a top official with Adidas has been indicted in the recruiting scandal, and KU does have one of the largest apparel contracts in the country with Adidas.

Black — who played a role in exposing the Keating Five in the Savings & Loan scandal of the 1980s — said college basketball leaders also ought to be worried about who is conducting the investigation.

“This isn’t just any office. This is that office,” Black said in an interview with the Journal-World on Wednesday evening. “It is unique among the roughly 60 U.S. attorneys offices in terms of its independence, its power, its prestige and the fact that it goes after the biggest things.”

Black said he expects more charges to be brought in the case. He said wording in the more than 100-page complaint filed by prosecutors strongly suggests it.

“They went out of their way in a complaint to say that what they found is widespread,” Black said. “So they’re signaling that it is much larger than just the folks they’ve indicted to this point.”

Specifically, Black said that means the possibility of coaches, executives and perhaps even athletes cutting deals to save themselves or take down others.

“It’s exceptionally common,” Black said of people who are indicted early in a case cutting a deal with prosecutors. “And it’s already occurred. The cooperating witness (in the initial charges) has admitted guilt and that’s in the complaint.”

In the college basketball world there may be many who know a lot. The fraternity of coaches, agents and shoe executives often is closely tied together and breeds great familiarity from one school to the next.

The industry already is a cut-throat one. This is college basketball, after all, and the objective is always to win.

But Black said it already is becoming evident how the power of a federal investigation and threats of jail time are changing the dynamics.

“It shows you how different it is when it’s a serious criminal prosecution,” Black said. “Pitino has had innumerable bites at the apple, but with this one, within 24 hours, he’s gone.”

If news of deals does start to break in the coming days, there could be a flood of them, Black said.

“That sets the dominoes falling and further encourages folks further down the chain to come running as well,” Black said. “And there is very much incentive. When you see other rats leaving the sinking ship, you run faster, goes the argument.”

In other words, "stay tuned."

Since the NCAA has little investigative power, it will be up to the US Justice Department to shine some light on this sleaze.

If you step back and look at the whole industry of college basketball and high level, future millionaire teenage recruits who often come from poverty laden families, it is easy to see what is happening here. These kids and their families aren't stupid. They see everyone is getting greased with money and why wouldn't they believe they should get theirs, also. After all, it is their kids and their talent that are making it all possible. And why wait until later because "my child could get hurt or not get drafted, or whatever, so why not get some of it for me and my family right now." In the frame of the whole picture, this situation meets every definition of a "racket." Thus, the U. S. Attorney's Office of the Southern District of New York. You can stonewall and lie to the NCAA, but if you lie to the prosecutor of a criminal, federal investigation, it is called perjury and is punishable. My guess there are some criminal attorneys with brand new "big fish" clients today. The future books to be written will make great reading during KU football season. I just hope the letters KU are't in any of the chapters.

There is no oversight. The NCAA, like any industry association, is not capable of policing itself. It's time for a regulatory agency in sports.

Matt, can you help answer the question I've been wondering about? Why is this illegal?

Giving someone money for services rendered isn't illegal. Is it only because some of the money is going to public institutions funded by tax dollars? Similar to bribing a public official? Does that mean that private schools can't be subjects of the federal investigation?

Good questions, Titus; I've been wondering about those things myself.

On a selfish level, I'm hoping that Pitino goes back into broadcasting. I don't know how many people remember the few years (two?) a while back when he was an analyst, but I thought he was the best I'd heard, and one of the few who didn't insult my intelligence on a regular basis ("It's now a two-possession game," for those of us who can't count to six). I don't know if they would hire him back for that after this scandal, but I hope they do.

It may seem a non-useful distinction, but Pitino is not technically fired yet; he is on unpaid leave. Among the possibilities spooling out from this point forward is that something completely exculpatory towards Pitino comes up (highly unlikely), or that this scandal becomes a conflagration where 30 D-1 coaches are in a position where they "should" be fired and the public consensus becomes that we can't allow the game to be destroyed and that it is unfair to blame any particular coach.

We're already looking at two top-10 coaches being fired (Sean Miller being the other), which would make this the most consequential college basketball scandal dating back to the point-shaving era. Let's say (picking some likable coaches) Tom Izzo and Jay Wright are up next. I think the public consensus would be that we need to reform the system more than kick all of these great coaches out of the industry.

Titus - There's a good article at the e that goes through the whole timeline of investigation and who was doing what wrong when.

In real simple terms though the problem with your depiction is that there were no services rendered. There was just thousands of dollars given for choosing a school or influencing someone else to choose. That is bribery and racketeering.

The schools should pay the Athletes