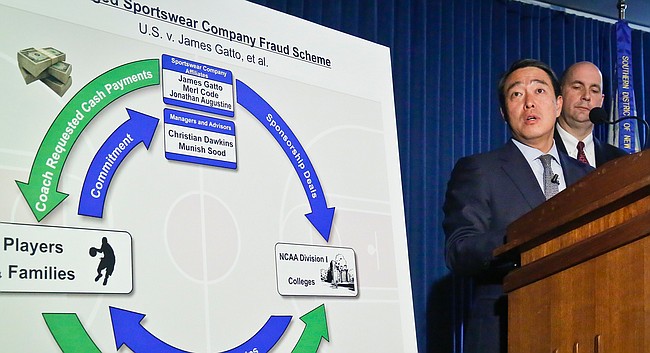 KU officials, like everyone else, are awaiting more details. One told me: "We're aware of the situation and are monitoring it." https://t.co/98qGrmvIpe

Everyone is getting rich in basketball except the players. Someday the players will figure this out and strike.

Probably true. That'll be the death of college sports for me.

Another (not really) reason to go back to Nike.

I won't be surprised if Nike has similar deals out as well. There is a LOT of money involved.

All four of those schools where the assistants have been named are Nike schools if im not mistaken.

Louisville is an adidas school, but you are correct in that the others are Nike schools. Will be interesting to see if anything else comes from today's news.

My mind immediately goes to Embiid/Wiggins as both went to an adidas school and then signed with them out of college, but they preceded the timeline of the investigation (as we know it today), so I feel a little more at ease that we are should be in the clear.

Oh i'm totally sure they do. I just don't like Adidas all that much and want Nike back.

Gatto was likely pulling the same stuff while he was at Nike.

But the fact that a fellow Big 12 school like Oklahoma State is caught in this scandal is a little too close to home, if you get my drift.

Don't think for a moment that this is over. They have people in cuffs who will undoubtedly make deals for leniency. As rampant as this system is today I'm pretty sure this is just the beginning of the heads that will roll.

This could be big, it could be nothing. My guess is it's something in between. Regardless, the Feds arent toothless as compared to the NCAA.

Cliff came to mind when reading the article.