New Kansas commitment David McCormack, the No. 2-ranked center in the 2018 recruiting class, recently posted this picture of himself decked out in KU gear from his unofficial visit this summer. McCormack orally committed to KU on Sunday evening on live television in Virginia.

Known as a player’s coach who isn’t afraid to clown around, talk some trash and jump into the middle of a circle to show off his dance moves and free spirit, Kansas basketball assistant coach Jerrance Howard needed none of that to land four-star center David McCormack, who orally committed to Kansas on Sunday.

Head coach Bill Self, of course, played a huge role in convincing McCormack to join the Jayhawks, and the 6-foot-10, 260-pound center from Oak Hill Academy made that crystal clear during his live announcement Sunday evening on a Norfolk, Virginia, news broadcast.

But it was Howard who laid the foundation for the bond between McCormack and Kansas and he did it the old-fashioned way. No gimmicks. No flash. No fancy pitch. Just a dose of genuine interest and the strength of a real relationship. 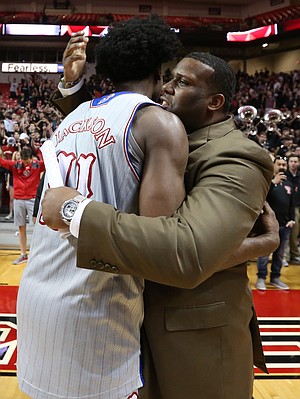 Kansas guard Josh Jackson (11) gets a hug from assistant coach Jerrance Howard as he leaves the floor following the Jayhawks' 80-79 win over Texas Tech, Saturday, Feb. 11, 2017 at United Supermarkets Arena in Lubbock, Texas.

“Coach Howard just kept an open line of communication,” McCormack told the Journal-World on Monday. “I spoke to him often. Any questions I asked he always answered straight-forward and, if he wasn’t able to, he found a way to get the information and did the best he could to get me the best answer possible. He just built a great relationship where I felt I could put trust in him, he could put trust in me and it was just a great two-way street.”

That path was built on the tradition that is Kansas basketball and McCormack said Howard sold it so hard that one might think he was a KU alum.

“Definitely,” said McCormack when asked if he could sense Howard’s passion for KU throughout the process. “He always talks about the heart, the tradition, the legacy, the championships, the winning program. I know he didn’t play at Kansas, but he did play for Coach Self and he has so much pride in that.”

As for whether Howard utilized any extra measures in his recruitment of McCormack, such as freestyle raps or social media tricks, the Oak Hill big man said Howard played it pretty straight.

“No, no, no,” said McCormack, laughing. “He is a guy who likes to joke around, but he didn’t do anything too crazy. He just showed his personality, which I was able to connect with immediately.”

McCormack’s bond with Howard carried through the entire recruiting process and left the 26th-ranked player in the Class of 2018 easily convince that Kansas was the place for him.

It helped that former Oak Hill teammate Billy Preston was already on campus and could share with him what it meant to be a Jayhawk. And it was an added bonus that Frank Mason III, who played for the same Team Loaded AAU program that produced McCormack, had already proven that a player from Virginia can become a star at Kansas.

“Billy’s my boy, you know,” McCormack said. “We played at Oak Hill together and have a good relationship. Billy’s a completely different player than I am so I wouldn’t say he really tied too much into my decision, but knowing somebody I know that’s there now and getting to talk to him and see how he’s doing really helps. I never really got a chance to talk to Frank, but it was very reassuring to know that somebody from the same program as me went there and is successful now. It really helped.”

With his decision now behind him and nothing but his senior season at Oak Hill and the countdown to Kansas in front of him, McCormack said his trip to KU this weekend, for Late Night in the Phog, would be an added bonus of the process.

McCormack did not purposely plan to announce the decision before his official visit to KU, but said simply, “It just kind of worked out that way. I found out it was the right place for me, I went ahead and made the decision and can come celebrate it now.”

Yes!! We've got our version of Jerrance the Entertainer.... boo ya!!

I realize it's a small thing but journalism should be about truth and honesty - and Tait is a chronic offender of overstating a player's physical dimensions. Yeah, you guessed it. It's a pet peeve of mine.

Aside from that it's a great signing.

Are you implying MT is making up numbers? Come on, guy! Have you considered that source information may change as kids actually GROW?

Very True Joe. - -Hell I have read myself from different articles where McCormack was 6'9 & 295 - -then read an article from a site from his coach saying he had lost 40 lbs so he then was 6'9 & 255 - -then read an article where they listed him at 6'10 so to say that Matt is giving bad Journalism is totally off base. - -You can only report what is being stated to you. Matt does " Pretty Well " then again you have others that are chronic complainers, really a stretch if this is all you got

I noticed the difference, myself. I thought Jerry's way of describing it, however, was humorous. Liked that.

Where is McCormack from? Where was he before Oak Hill?

I sat next to him at LAX for 3.5 hours during a flight delay to Atlanta in July. Super nice kid, of course I asked him if KU was in the mix? He just smiled and said a few nice thing about the program and coaches. Very soft spoken and respectful. Nice signing!!!

Was he in a football team before? I'm pretty sure some fb teams can make use of his size and agility.

His stated height at 6 foot 10 would probably work against him although there have been exceptions. As it is, he would be tied for 2nd as the tallest NFL player in its history.

Pretty cool highlight video- i like at the 17 second mark where he shoots a FT, says "it's off" ... and then happily surprised like it went in:) https://www.youtube.com/watch?v=C9gP_...

Just curious, Ryan - are you and the "Steve Zimmerman" above related?

"Trust" in Jerrance Howard? Show me the money!