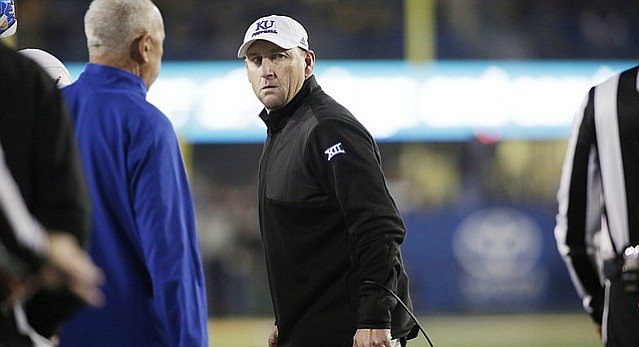 Kansas coach David Beaty argues with the officials during the first half of the team's NCAA college football game against West Virginia, Saturday, Nov. 5, 2016, in Morgantown, W.Va.

Taking the podium for weekly state-of-the-program addresses ranks as one of the many, many steep challenges of wearing the "head football coach at Kansas" title.

Charlie Weis preferred the blunt approach, and once referred to his players on the field as “a pile of crap.” That didn’t do much for team morale or for his job security.

A few days after standing on the opposite sideline from one of the men responsible for one of the most merciful acts in the history of mankind, Turner Gill took the opportunity to point out that his team, which had surrendered an average of 60.3 points in the three most recent games, actually was better than that number might suggest.

Oklahoma State coach Mike Gundy had inserted his third-string quarterback into the game by the second quarter and employed mighty tame play-calling the rest of the way or the score would have been a lot worse than 70-28. Had Gundy gunned for 100, his team would have obliged.

David Beaty’s style is closer to Gill’s than Weis’ in terms of looking on the bright side.

Nothing has changed in that Kansas hasn’t been a good football team since starting the 2009 season with a 5-0 record.

Beaty pointed out that Kansas went 4 of 5 on fourth-down conversions in the 45-27 loss to the Chippewas.

True, but Kansas ranks ninth in the Big 12 in net punting averaging at 32.7 yards — not the shade of lipstick you want to put on a pig.

The timing of the loss was particularly vexing because KU is trying to raise $300 million for stadium renovations — I’m told one remarkably generous donor pledged $100 million spread out over 10 years.

Look for stadium plans to come out soon because back when he announced the ambitious plan, athletic director Sheahon Zenger said he would share details in September.

During a summer tour to meet with boosters, Beaty generated excitement for the stadium facelift and for the season. Many left those gatherings convinced Kanas would get to a bowl game this season.

Now they feel cheated, even though bowl aspirations were on the unrealistic side.

In the end, talk is always cheap and the scoreboard tells the story, which makes this Saturday’s game in Athens, Ohio, so ginormous.

An upset victory could restore a measure of hope, end the road losing streak at 41 games and provide solid evidence that real progress is being made. After all, at halftime last season in Lawrence against Ohio, KU trailed in total yards, 359-21, on the way to a 37-21 loss in a game it trailed 25-0. Pounded at home one year, victorious on the road the next. Progress.

Another loss and it won’t matter what is said at the podium from which “pile of crap,” net punting and fourth-down stats have spewed in recent years.

Al Davis, unrefined late owner of the seedy Oakland Raiders, said all that needs to be said in three words: “Just win, baby!”

At this point calling this team a "good football team" is no different than putting polish on a turd.

It would be a great win for those young men and the coaches who put so much work into their jobs. It would be a defining moment and to me, far more impressive than the win against Texas.

Coaches who are in this spot are darned if they do and darned if they don't when it comes to press conferences. Certainly with over a 100 plays against CMU, there were some good ones. Some very good ones, in fact. Highlighting fourth-down conversions though, is all wrong. It focuses on all the wrong things.

Sometimes, teams can get focused on the road. Ohio's stadium holds 27,000 and I'm guessing it will be full. But that's not exactly Michigan's Big House, so this may be exactly the time of challenge this team needs. A good atmosphere that isn't overwhelming.

"During a summer tour to meet with boosters,..Many left those gatherings convinced Kansas would get to a bowl game this season." -- Keegan

Many were "convinced" of a bowl game? How 'bout a few or some were "hopeful".

Sheesh! Another journalist invents some facts to support a story line with a false premise.

Spot on. Anyone who was convinced KU was going to a bowl game this season is absolutely crazy.

There are a lot of crazy people in this world.

If KU loses on Saturday, I would like to see Keegan and his sports writer staff 'fess up to how they were pulled in just the same way as these hapless and probably fictitious donors. Every year, we get articles talking about the improvements on the way -- this year, it was a lot of Bender hype. Anybody remember Tom's frequent touting of "Speedy" Gonzales? I know it's not easy to cover KU football and you need some optimism just to make it through the job, but the distancing from delusionally optimistic donors rings false to me. I literally don't know anyone that thought KU would make a bowl this year... come on.

Count me in the hopeful and ever faithful for a reversal of fortune for KU football...but the numbers don't lie.

We're still about 10 short of having a full compliment of scholarship players.

Looking at the 2-deep finds only 6 Srs - only 3 who have lettered for 3yrs and only 3 starters.

The Jr/So classes provide 36 players...with only 6 freshmen pressed into duty.

Beaty inherited a roster that was about 30 players short of the 85 man scholarship level and it takes time to dig out of that hole - very few have the ability to pull off what Old Balls did at KState.

Exactly. It's nearly impossible to win with the empty roster Beaty inherited. You can't fix that in 3 years.

If by "fix", you have the team in a bowl game, hell no, I wasn't expecting that. But I was expecting to be no worse 4-8 in Year 3 of the Beaty tenure, and that no longer looks like a real possibility.

Tom, look at the bright side, we have 10 games left. There is no indication that we will lose all 9 games. If we win 2 gamiest that's progress. The bar is so low for Kansas that a 3-8 season is improvement. What has Kansas done to raise such lofty expectations that a loss to a good CMU team, is catastrophic? Nothing has changed for me. I will tune in on Saturday, and root them on. I will only take your articles seriously if the team reverts back to 66-3 losses. Right now, we are holding steady, and the team needs to earn respectability, which takes time. Wins would help, but they will come with progress. I like Beaty so I'm bias. Weis, and Turner were bad coaches or bad fits. Beaty seems like he is going to be here the long haul, and we need that kind of coach.

At this rate Beaty may set the record for the worst winning pct of any DI coach, ever. At least Gill went 4-3 against non-Big 12 teams. If you want 66-3 just wait for the OU and OSU games.

The clock on the wall says it's "put up" time.

The alternative is that you get me.

I can't argue with the premise that we need to win this week, as my hope will be restored immeasurably. After last week, I just want to start watching pre-season hockey!

Pre-season hockey? What, "When does basketball season start?" didn't want any of that?

I want to see us stop their run game. If we dont load the box i will be disappointed.

What?? Are you kidding me? We'd give up 600 yards passing if we did that. Did you not watch the Central Michigan game?

Load the box? And leave that secondary exposed like that. No way.

No chance. There isn't anything big about this game other than it would take a miracle to win.

If Beaty's first full recruiting class loses every game as seniors, we'll know it isn't working. Til then, let's see what happens and be more supportive of what Beaty and staff are trying to accomplish. Just a little success will do wonders for each upcoming recruiting class. Rock Chalk!!

If I'm not mistaken, Frank Solich is still the coach at Ohio. Solich has never lost to Kansas.

Yes, Frankie is in Year #9 at OU. The Cleveland Native has found his niche in SE Ohio. KU better win tomorrow, I live near there, going to Athens! KU Alumni pre-game gathering is 9-12!

The offense will have to put up a lot of points to offset the generous KU secondary.

If we don't go with a more balanced attack we will lose. Why, because our defense can't carry the team yet, and they can't be on the field so damn much. I am still not sure about Bender.

We are a mule trying to act like a race horse. If Bender could scramble, he would be dangerous, [if pigs could fly...] Our line cries for a more mobile quarterback.

Strangely enough the team showed improvement when Stanley was QB , and I am not sure about Bende leadership IQ, and team management ability.

The other essential thing is close up the field position loss on punts, we have a decent kicker, but teams are running it back to far on us.

Good news is that Meacham seems to understand the reality.

Lastly, think about what your players are capable of and design your offense and defense for them, this is the age of customization you know?