A “tough sucker,” according to his head coach, junior Kansas receiver Steven Sims Jr. did all he could to try and get healthy enough to make an impact Saturday against Central Michigan.

However, after trying to return a couple punts and giving it a go on offense briefly, an ankle injury kept Sims from factoring in KU’s plans for the vast majority of what turned out to be a 45-27 loss at Memorial Stadium.

“We tried to get Sims going. We did,” KU coach David Beaty said after his team fell to 1-1 and was out-gained in total yardage 590-470. “But he just couldn’t push off. Obviously there were some things going on injury wise, but we couldn’t get him well.”

The Jayhawks’ leading receiver in every category a year ago, Sims spent much of the past week with KU’s medical staff hoping to return to full health.

“He tried, to his credit. When you’re missing a dynamic guy like that it makes it a little bit difficult on you. But, hey, we’ve got other guys that can do it,” Beaty said. 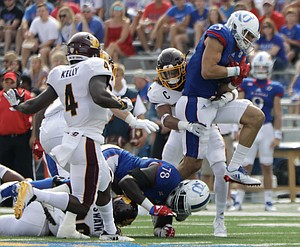 “Daylon Charlot (one catch for no gain) is a guy we think is very capable and we certainly know Chase is,” Beaty said. “We’ve got to be more consistent with those guys, as well.”

Junior transfer receiver Kerr Johnson Jr. also missed the game due to injury, as did junior running back Taylor Martin.

Though Bender (32-of-62 passing, for 323 yards and two interceptions) often struggled versus Central Michigan, Beaty said he didn’t feel inspired in the second half to relieve his No. 1 QB in favor of a reserve.

Redshirt sophomore quarterback Carter Stanley has yet to play through two weeks.

Bender was sacked twice by the Chippewas and threw 30 incompletions to go with his two turnovers.

“There was times that they did (struggle in pass protection), but when you look at it I think some of it had to do with how long we were holding the ball. Some of those times, they were in a drop-eight situation a few times. There’s just not a lot of open windows back there,” Beaty said of CMU’s coverage. “Peyton’s got to pull it down and run it sometimes in those situations. Everybody’s accounted for except for the quarterback, so he can’t just stand back there and hold it forever.” 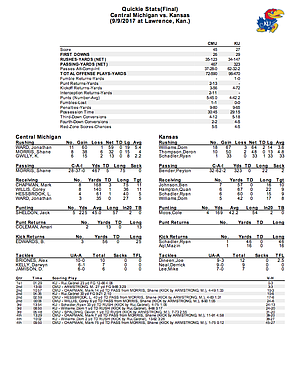 Not that it ended up providing a competitive advantage, but when KU defensive coordinator Clint Bowen fired up game video of Central Michigan’s Week 1 victory over Rhode Island it was far from Bowen’s introduction to CMU offensive coordinator Chris Ostrowsky.

Bowen said earlier this week he has known Ostrowsky for some time now, because the Chippewas’ play-caller and quarterbacks coach was a childhood friend of former KU offensive lineman Keith Loneker Sr. Bowen met Ostrowsky through Loneker when the now-coordinator and assistant head coach at KU was a defensive back for the Jayhawks.

Their existing relationship meant Bowen entered the week familiar with Ostrowsky's style, because he had followed his career from the coordinator’s time as an assistant at Northern Michigan.

KU attempted 96 plays, the most since 90 versus Texas Tech in 2015. … Senior corner Derrick Neal made a career-best nine tackles. … Senior kicker Gabriel Rui made two of three field-goal tries, including a career-long 33-yarder in the second quarter. … Harrell recovered the first fumble of his career on special teams in the second quarter while covering a botched CMU return.

Coach had everyone believing that Stanley and Bender were very equal in ability and it was hard to decide who would start. Well either that is not true because surely Stanley deserves playing time. Bender is strictly a pocket player no ability to do escape rushes or gain yards rushing. Today his passing was questionable. Coach give Stanley a chance to show his ability.

50% completion rate is not good, but is that the QB or the receivers? QB juggling sure didn't seem to be the answer last year, and Beaty was shredded for trying it. Also thought there were some muttered comments about Stanley not being 100% the last week-ish of August, though that can't be reported, because injuries are not to be spoken of.

The problem is KU's defense. The Chippewas shredded it. Easily.

I'm not sure what Daylon is doing, or not doing, that is limiting his reps, but we need to get him straight and on the field. He's got way too much playmaking ability to get 1 pass for 0 yards.

Unfortunately, that sort of usage/performance could quite possibly be the biggest impact on recruiting also. Even if there aren't as many W's as elsewhere, if a top recruit sees that others are excelling here (see Lee, Michael, 2016) there is at least a possibility of getting them to follow. If they aren't getting on the field, much less excelling, I'm afraid our chances will escape us like a Chippewa WR.