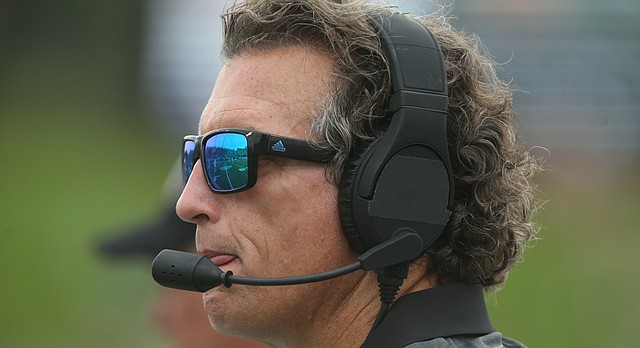 Kansas football defensive coordinator Clint Bowen didn’t have to look far this week to find an expert on key members of TCU’s offense.

Typical video study on his own, of course, could have shown Bowen what Horned Frogs quarterback Kenny Hill, receiver KaVontae Turpin and running backs Darius Anderson, Kyle Hicks and Sewo Olonilua have done to propel the team to 41.3 points and 464.8 yards per game. But Bowen also prepared for the Jayhawks’ nationally-televised road challenge at No. 4 TCU (7 p.m. Saturday, on FOX) by picking the brain of KU offensive coordinator Doug Meacham, who spent the previous three seasons as co-coordinator and inside receivers coach with the Frogs.

Bowen said Meacham’s familiarity with TCU’s offensive personnel “across the board” proved beneficial.

“It’s not as much scheme as it is knowing their guys,” Meacham said. “Every time you look down at the other end (during TCU practices) they always look really good.”

Regardless of how well Meacham knows the tendencies of the Frogs’ best players, only time will tell whether that will influence the outcome of a game in which Kansas (1-5, 0-3) is a 37.5-point underdog.

Head coach David Beaty said he would be lying if he claimed Meacham’s understanding of this week’s opponent had no impact.

“The thing about guys on your team, sometimes you know too much. If you just watch a guy on tape, you don't know anything about the way they conduct their life and the things off the field, and those things can kind of blur you when you're with them all the time. But when you don't see any of that and you just see them playing, you just see a super player,” Beaty said. “So there are some things that you can learn when you have actual relationships with people and, you know, the hard thing for us is just about every one of them that are playing, (Meacham’s) evaluation is that they're really good. I mean, he likes a lot of those kids, because he recruited a lot of them and they built a good team there.”

Even though Meacham spent three years working inside TCU’s Amon G. Carter Stadium, in Fort Worth, Texas, he said this week doesn’t feel any different for him.

It’s also a scenario he’s experienced before, when in 2015 the one-time Oklahoma State assistant returned to Stillwater, Okla., with the Horned Frogs. TCU put up 663 yards of offense but suffered its first of two losses that season on a day quarterback Trevone Boykin threw four interceptions.

While discussing KU’s fruitless offensive showing at Iowa State this past weekend, Meacham called it the “worst I’ve ever seen” in his 26 years of coaching. KU’s Air Raid coordinator often referenced how much the team missed injured starting center Mesa Ribordy in the shutout loss that netted a meager 106 yards.

“The thing about losing a center is he’s the quarterback of all the calls they make up front. And there’s confidence that bleeds from the inside out,” Meacham said. “Your guards, when they’re next to him, they play a little bit better. And same thing, it makes the tackles better.”

Beaty said earlier this week Ribordy will be a game-time decision for the TCU game. Asked whether he is preparing as if Ribordy won’t play, Meacham replied: “I don’t know if I can answer that or not.”

Jacob Bragg started at center in Ribordy’s place at ISU.

Looking for recurring offensive issues that showed up on video from the loss in Ames, Iowa, Meacham said the blowout left coaches trying to determine what they can do differently at the point of attack, and identifying the strength of the O-line at this point.

“The overall theme of it was,” he said, “we’re just kind of beat up up front a little bit. We’re trying to figure that out.”

A week after the Kansas offense sputtered to 11 three-and-outs, it takes on a Frogs defense that this season has forced opponents to three-and-out on 33.8 percent of possessions. West Virginia is the only TCU opponent so far this season to get through a loss without a three-and-out.