In the first three starts of Peyton Bender’s Kansas football career, the desired results didn’t always show up, but the junior transfer quarterback at least eclipsed 300 yards every week.

In three losses since, though, Bender’s yardage production has declined, too: from 197 yards on 17-for-32 passing against West Virginia, to 146 yards after going 12-for-24 versus Texas Tech, to a rock-bottom 8-of-19 outing for 18 yards at Iowa State.

So where exactly does his confidence stand after a couple of rough weeks?

“I haven't noticed anything from Bender other than normal,” KU head coach David Beaty responded. “He's such a calm, cool, collected guy. His demeanor doesn't change just a whole lot. I think that's a positive for him, because he keeps a steady demeanor no matter what.”

At the season’s midway mark, KU’s starting quarterback has completed 55.2 percent of his 221 passes, for 1,391 yards, with eight touchdowns and nine interceptions.

Bender said the wet conditions at Iowa State didn’t play a factor in play-calling or the offense’s putrid 106 yards in the loss.

The Jayhawks (1-5 overall, 0-3 Big 12) did play without starting center Mesa Ribordy for the first time this season at ISU. When prompted, Bender admitted the offense was challenged with overcoming a lack of cohesion on the offensive line, with Jacob Bragg filling in at center.

“Missing Mesa, it definitely hurts, because he’s a great player. He’s one of our best O-linemen,” Bender said. “So not having him out there it definitely hurts. But guys are going to get hurt throughout the season. Guys aren’t going to be able to play. It’s next man up, and we’ve got capable guys at every position to get the job done. So we’ve just got to.”

Bender stressed not worrying about “the uncontrollables” was key for him and his teammates. His head coach said he rarely sees the QB fret about anything — or get overly excited.

Ahead of KU’s trip to No. 4 TCU (7 p.m. kickoff Saturday, on FOX), Beaty said the footage of the 45-0 debacle at Iowa State showed how “every one of us” was responsible in one way or another for the offense’s inept display.

“So I know it's vogue to try to find somebody to blame it on. The truth is, it's all of us. We've got to all work collectively together to get it fixed,” Beaty offered. 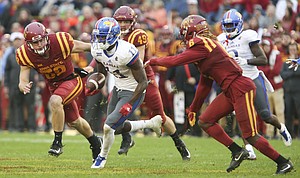 As one of the many consequences of the horrible day for KU’s offense, junior receiver Steven Sims Jr., who has two 100-yard games this season, only caught one pass for six yards.

Bender said Sims, who was averaging 5.3 receptions and 100 yards a game as a full participant (the junior played sparingly vs. Central Michigan when hurt) before the shutout, appropriately handled the disappointment of not having many opportunities to get involved.

“All the guys are confident guys,” Bender said of the receivers. “It just was one of those days where we couldn’t get it to work for some reason. But we’re all confident guys. We’re confident in our ability.”

Meacham back at TCU

Before becoming KU’s offensive coordinator, Doug Meacham spent the previous three seasons at TCU, as inside receivers coach and co-coordinator.

Meacham’s return to Fort Worth, Texas, comes days after his Air Raid offense backfired in Ames, Iowa. His boss said the coordinator entered the week of preparation for No. 4 TCU (6-0, 3-0) just as Beaty expected.

“Man, I don't know how you could get any more juiced up than that guy lives his life, to be honest with you. He doesn't drink a lot of energy drinks, but he sure looks like it. He could be a poster boy for Red Bull and never have a drink of it. He's just got a lot of energy,” KU’s head coach said of Meacham. “He's a guy that coming in here Sunday, watching him with that team, you realize the type of talent that individual has. Watching how he handled the offense, how he handled that situation from Saturday, and handled it in reality. Not what perception is, because we don't get to live in perception. We get to live in reality and how we're going to fix it and the things that caused it and what we go to. He did a really nice job with the team and the rest of the staff.”

Bender is fine. Beaty is not fine. Zenger is...well, he needs to be fired. Today!

Watching Bender play doesn’t make me think “oh there’s a calm, cool, collected guy.” I’m thinking “he looks timid, scared, and confused.” And to be honest, I don’t want a quiet and calm QB. I want a QB that will look the defense in the eye and say “I’m going to throw all over your arse and you can’t stop me.”

Totally agree! I know the end result may stay dismal, but I would prefer Stanley's personality as leader on the field any day.

The fact is his personality makes it easier for him than others to mask his lack of confidence. It is there and anyone who cannot see it has either turned a blind eye or is so biased he cannot see the forest for the trees.

Let's just play to game and see what happens. Recently, we have always played well at TCU.

the thing that worries me is Bender's comment, in one of the other articles, where he said the players realized after watching the tape that they were not trying very hard, or something to that effect. That stuns me in that one would think, going into Iowa State, that was a game, at least before the season started, that many thought we could win. So one would think the players would be really jacked up to get their first conference win. That comment just worries me that Coach is not getting these guys motivated.

You said it, Barry.

Beatys credibility is tanking. The results speak for themselves. I hope he noticed that. He just does not have the right stuff to be our head coach. Too passive. I wonder if after any of the poor outings if he's done anything punitive whatsoever. Wind sprints and otherwise brutal practices have a way of elevating effort and focus.

Bender might be confident and unwavering. He might also be aloof, which isn't good in terms of pumping up your teammates. Carter Stanley has the personality and moxie that gets people pumped.

Bender is the perfect QB for this coach. He has that sissy personality that will just go out there and do what the coaches say.

Any coach that saw what Stanley did and how this team rallied around him the end of 2016 season, and then goes out and makes a change is simply thinking too damn hard. Stanley should have been named the QB end of last year.

I honestly believe that coach has lost his players, all the build up he promised during the off season and now the way the team is playing theres not much motivation can do. coach may be a great guy but he is way over his head, the days of the pc coach is over and the house is crumbling down, there is no drive or hunger from this team

I debate in my own mind as to who is the guy who wants Bender to play at this point. It is clear to me there is evidence from the last 3 games of last year that Stanley can rally the troops better than Bender. His accuracy at this stage is no worse which was supposed to be Bender's strength. So my question is, who is pushing Bender. Is it Meacham or Beaty. Until now, at least, I thought it was Meacham. Now I am not so sure. Maybe it is both, but it is hard to believe one of them is not looking at the other with a questioning gaze.

“I’ve seen him make ridiculous throws..." In practice? Because I haven't seen any wow moments in games.

I saw him make a ridiculous throw on 4th down against Ohio...he missed the receiver on a 5-yard out by 2 full yards.

When are we going to all agree that the vaunted "Air Raid" offense, so popular and effective years ago - at least this one -- ain't working anymore. Not with this talent - on the field and in the coaches' box.

I really want to believe in Coach Beaty, but unwavering optimism, in the face of VERY nuanced "improvement", rings very hollow. Either our talent is that bad, and his "light a fire under their @$$" behavior behind the scenes isn't working, and we just have to take our medicine, recruit and improve slowly, or he's not and eventually the players will tune him out (or are already, as one might interpret the 45-0 effort last week).

I think it's going to get worse before it gets better. We don't have a full complement of scholarship players. It will take some time to get up to the maximum number of scholarships filled with division one talent. Then, it will take several years for those scholarship athletes to be upper classmen competing for their jobs against other division one talent. I am thinking this is a 6-7 year project, and we are going to see some real bad times in the next year or so.

We got blown out by two MAC schools. The lack of talent argument just doesn't hold up.

As one sportscaster suggested, KU football may take rock bottom to a new level and find a way to drill below the bedrock. After Beaty's 5th season, it will be interesting to see if KU has bottomed out and is finally getting out of the basement. I am as disappointed as the rest of KU fans who like football, but will wait out his tenure and hope they are truly rebuilding.