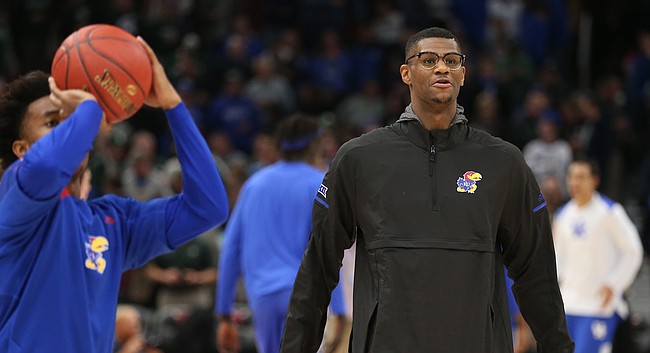 While the accident that led to University of Kansas basketball player Billy Preston’s benching this week didn’t merit reporting to law enforcement, something about the vehicle now has the focus of the KU Athletics compliance office.

“Billy hit a curb Saturday midday on 19th Street on campus, resulting in minor damage to his tires,” Jim Marchiony, KU Athletics associate athletics director for public affairs, said Wednesday afternoon. “Other than his tires, there was no property damage, and there were no injuries or other individuals involved ... a police report would not be filed in a situation like this.”

However, following the accident, the KU Athletics compliance office is looking into the “financial picture” of the car.

Marchiony declined to answer what that means or what the office is trying to figure out. Instead, on Wednesday he reiterated a statement made by Coach Bill Self about an hour before Tuesday’s matchup against Kentucky to explain why Preston wasn’t playing.

“We want our compliance office to have a clearer financial picture specific to the vehicle,” Marchiony said.

When asked to whom the car was legally registered, Marchiony said he did not know. He did say Preston, a five-star freshman forward from Los Angeles who attended high school in Virginia, wasn’t borrowing the car or driving it without permission.

“This is Billy’s car,” Marchiony said.

On Wednesday morning, a Journal-World reporter observed a late-model Dodge Charger in the parking lot of the men’s basketball dorm on campus. The car, with temporary Florida tags, had damage to two tires and scuff marks. It could not be confirmed, however, whether this was the vehicle involved in the accident.

Self said Tuesday that when he learned of Preston’s “single-vehicle incident” he reported it to KU Athletics administration, as is protocol, the Journal-World previously reported. Though officials spent the better part of Tuesday attempting to gain clarity so Preston could play that night, Self said, it didn’t happen.

“They started doing the checking on the car and wanted to get a clearer picture of how some things were done, and we couldn’t get it cleared up,” Self said.

Self said Preston would continue to be held out until the review is complete.

“I am confident it’ll get cleared up. But I don’t know the time frame,” Self said.

Self said Preston had done that.

“Everything was good,” Self said. “But they dove into it a little bit deeper. That doesn’t mean that something wrong has been done.”

Preston also sat out KU’s season-opening game against Tennessee State on Friday after missing curfew and class leading up to the game.

KU police did not take any accident reports over the weekend, Deputy Chief James Anguiano confirmed. A review of Lawrence Police Department reports from accidents occurring on streets near the KU campus on Saturday also revealed none involving Preston.

Such police reports would contain public information about the people involved and registered owners of the vehicle or vehicles involved.

Legally, not all traffic accidents must be reported to police.

According to Kansas statute, drivers aren’t required to report noninjury accidents to police if apparent property damage was less than $1,000. If drivers hit and damage someone else’s unattended property, they are supposed to notify the owner, according to state statute.

I don't understand this story, was he driving a Bentley or something? Is the car registered to David Booth? I mean why is this going down this way? I'm confused by this whole thing...

I doubt the car had the Adidas Edition upgrade.

I seem to remember several years ago Scott Pollard or someone was letting KU athletes drive his cars around town or something like that, and it ended up having to stop because of impermissible benefits or something to that affect. Edit: Pollard sold car to Tyshawn Taylor but it was still registered to Pollard... Markieff Morris was driving it and crashed it.

Also, it seems like Brannen Greene had an incident where he was driving someone else's car and got in trouble... don't remember the details though.

I happen to think that there is much more than a traffic citation in play. Now our prize recruit will have as much impact as Diallo did in his first year here.

I will happily admit to being wrong if this process doesn't take the rest of this semester.

whatever the issue, I hope Preston is cleared and the issue is resolved..Im glad KU won but we will need Preston if we are to play past the elite 8 this year...

this whole thing is sketchy, fishy.

I just had to look up some Billy Preston (The Musician) Songs.

A couple of his Hits seem appropriate for Billy's current situation (which I sure hope works out okay for him and KU).

"Nothin' from Nothin' leaves Nothin'. You Gotta have Somethin' if you want to be with me."

"Will it go Round in Circles? Will it fly high like a Bird up in the Sky?"

Get rid of this kid. He is bad news.

It's a little early to be writing off an 18 or 19 year old kid for missing his curfew, a class, and hitting a curb in his car, all in a single weekend. Preston deserves to get a chance to show he can learn a lesson and grow as a human being in my opinion.

Did you forget to take your medication again?

Honestly, we should all be happy as all heck that we're talking about missing a curfew and class a d hitting a curb. None of these are international incidents like some other university basketball team is dealing with. I'll take the innocent in proven guilty approach for now. Everyone here should have learned from the Bragg incident last year that jumping to conclusions without information is risky.

Who knows, maybe the kid has a very expensive stereo system in his car and really nice rims and they want to figure out how he was able to afford them.

Seems like the questions are about the financing of the car itself. Why does a kid from LA, who went to HS in VA have FL tags?

The question I have is why did they wait until he ran over a curb to start looking into it. The article states that they know that it's Billy's car, and that he registered the car with KU Athletics, Inc. So surely they knew about the FL license plates, right? This situation is just very fishy.

KU BB has the worst drivers in the history of mankind. Have any of these kids driven a car before arriving in Lawrence?

Very Fishy Bob. The time it is taking to resolve this does not make sense. Anyone can produce their purchase contract, financing agreement, bank statements showing they had the down payment, whatever. That sort of paperwork could be produced in a day, faxed, hand delivered, etc same day. The only reason for a delay would be if someone is not coming up with the documents or this whole situation has already been presented to the NCAA to review and now you go into an extended black hole waiting on them. Diallo took months. This whole thing is sketchy, fishy.

At the end of this "investigation," if Preston is found to be innocent of any wrongdoing, are all you condemning him willing to publicly apologize?

well, so far according to Bill Self, Preston did miss curfew, Preston did skip a class, Preston did have an accident, all of which has hurt not only himself but his teammates. Not sure what us fans need to apologize for even if this "financing" investigation does not go bad for him and for the team.