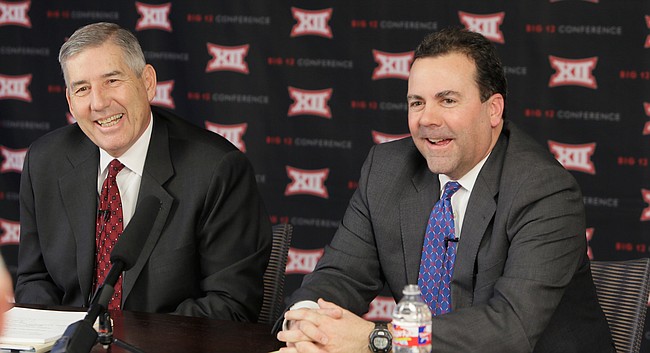 Kansas athletic director Sheahon Zenger, who took over for Lew Perkins in early 2011, recently received a contract extension through June of 2021 from outgoing chancellor Bernadette Gray-Little.

According to a news release sent out by the KU athletic department on Sunday, the amendment to Zenger's existing contract, which was signed a couple of weeks ago, will increase Zenger’s base pay from $619,000 to $700,000 annually.

That puts Zenger in the middle of the pack among Big 12 Conference athletic directors. At the time of his last extension, signed in 2013 and termed through 2018, Zenger became the sixth highest paid AD in the Big 12 and the new deal is expected to move him up one spot, thanks mostly to the departure of Kansas State AD John Currie.

“I’m very pleased that I will have the opportunity to continue to represent this great university and work alongside the outstanding coaches and student-athletes we have here at KU,” Zenger said in a news release. “I have really enjoyed sharing in the tremendous accomplishments so many of our teams have achieved over the past several years. Likewise, we are committed to doing everything we can to raise the level of success of every one of our teams.”

The extension proved to be the final collaboration between Zenger and Gray-Little, who last week was replaced by new chancellor Dr. Doug Girod. Girod, the executive vice chancellor of the KU Medical Center, officially will step into his new post on July 1.

“Since Sheahon’s arrival in (January) 2011 Kansas Athletics has enjoyed success on and off the field,” Gray-Little said. “We’ve had a team win a national championship, two teams reach NCAA Final Fours and multiple NCAA Tournament appearances by other sports. We’ve seen some $90 million in construction and renovation, from Rock Chalk Park to Memorial Stadium to the DeBruce Center. And academically, Athletics’ Graduation Success Rate and APR marks put us in excellent standing with the NCAA. I am confident that under Sheahon’s leadership Athletics will experience even more success in the coming years.”

Kansas coach Bill Self also offered appreciation for Zenger’s support of all KU teams throughout his time overseeing Kansas Athletics.

“I’m happy for Sheahon and the department,” Self said. “Sheahon’s focus since he’s been here is to give the coaches what they need to be successful. We’ve got a bunch of teams doing really well, we’ve added great new facilities, and I can see things getting even better in the next few years.”

Zenger, who took over as KU’s leader after a successful stint at Illinois State, has never been shy about expressing the meaning of returning to his home state to take on such an important and highly visible role. It has not been all roses for the Hays native, who already has worked with three football coaches, hiring two and firing two, and overseen large-scale turnover in other areas of the athletic department, as well.

Long days, sleepless nights and heavy scrutiny and times of stress have been as much a part of his time as KU’s AD as the successes — both those mentioned by Gray-Little and dozens of smaller and sometimes more meaningful victories — but Zenger has stayed true to himself and his Kansan morals throughout the process, leading with a measured approach and a smile.

“This is home for me,” he said. “And I truly believe we’re poised for even more success in the near future and I can’t wait to share in that excitement as well.”

Kudos.......keep the rolling stone gathering no moss! Takes the pressure off the new Chancellor who has bigger fish to fry than putting up with athletics naysayers and arm chair quarterbacks! To heck with the negative crowds.

Fred, you are a classless moron! Go back under your rock and __ yourself. You can fill in the blank.

Great vocab, Frederick. Wish I had your intellect. Now please go away, or go back downstairs into your parents' basement. Harlan, I've flagged him too...

It sure took a long time for the LJW to delete Fred's message. They just did it while I was making my previous post, just in case they try to delete mine too. I left the "blank" so that Fred could fill it in.

I know a very small minority will be disappointed but those who have watched KU Sports for years will be able to view Zenger in perspective and realize the A.D. is on the rise all across the board.

I'm an educator, Frederick, and I find your labeling to be offensive. Go away!!! And BTW, I'm with what I believe to be the vast majority who believe this was a great move. GROW UP!!!!!

Congrats Sheahon. It's taken a little while but I believe coach Beatty will be the answer we have been searching for. It's up to you to keep it going. Let's lock up coach for a long time.

I'm a little surprised that only one person has responded negatively. Everything that Dr Z has done has not been perfect, but who honestly has that kind of performance. As the article says, the vast majority of the direction in the department has been positive and upward. He has done well, and deserves the extension.

Welcome to the Mountain West, Laddies.

Zenger should have been fired due to the Weis fiasco.

A lot of us supported the decision to hire Weis, fully knowing the risk. It was a desperation move that didn't work out.

Zenger has brought a lot of integrity and honesty back to the KU athletic department. I'm not sure that has always been the case.

First off before you even mention athletics, remember how many of our student athletes have had great academic performance/success here since Dr Z has been here and his focus on the student athletes perform well in the class since he got here!

Anyway well concerning Dr Zenger, not only did he have the mess left still by Mangino, and his bad moments, and his bad judgments he was also trying to fix a the not so good coaching decisions of Coach Gil. Gil was a good person but was not ready for head coaching at the time.Dr Zenger not only had to fix 1 bad coaching choice, but 2 coaches who had pulled the football team down alot.I did not see any good in the present head football coaches or even good coaches like a Lou Holtz or other coaches in the past that would taken a team in the shape that Kansas was in when he came here in 2011.Weis was as good as we could get at the time unfortunately.It happens like I say alot of bad years to make up for.

If you want to gripe about a Athletic Director about KU Football you ought to be furious, and point fingers & anger at Lew Perkins.Most people Do Not Realize that Jim Harbaugh wanted to come to Kansas U. and turn the football program around.Harbaugh wanted to finish his season at U. of San Diego college football and do the bowl game they got in.He said he wanted to work on a deal after the bowl game.Perkins like a spoiled baby shot him down for not waiting a couple of weeks.Think about that.

Now on to Dr Z here as athletic Director look at the cosmetic stuff, Rules of Basketball here, Rock Chalk Park, the new softball field, he is going to do the football field remodeling, hey ho got rid of the track on the football field thank god and even the baseball field.according to rumor I heard.My god critics most of KU Athletics outside of Phog Allen fieldhouse were way outdated.In addition look at the successes they have had a Ladies Track NC.Ladies Volleyball final 4, KU Mens B-Ball well you know that success they have had.

I am glad the Dr Z is our AD keep up the good work!

Dr. Girod takes over in a month. It should have been his decision on Zenger's future.

I think that, probably, it still does. As Beaty goes so goes Zenger. Girod will need to begin developing a potential candidate list over the summer.

Zenger has had two swings at hiring the head coach and he's gone unconventional long shot on both. While I agree that the program seems to be turning the corner, everyone knows that W's talk and L's walk.

No need to walk back the Alice in Wonderland decision making of the past two years in football, bottom line: we are here now. It's Beaty's program. We need to be visibly, measurably, significantly better this year. If we aren't, the clock is ticking for both guys.

Dr. Girod was already in the KU system. Given the timing, don't you think they they had plenty of discussion and decided together to do it this way?

As to Al Martin's comment - perhaps. But the optics are horrible. If there was a lot of discussion and Dr. Girod was fully on board, why not wait a few weeks and then let Dr. Girod make that announcement. The way it was done it appears that it was a parting shot to protect someone. If it was delayed a couple weeks, then there is an appearance of unity.

How many P5 ADs get to hire 2 head coaches in football? Not many. Cant envision him being able to a hire a 3rd.

Don't like the idea of the outgoing chancellor obligating their employer like this yet it does make it more likely that what we need will come to pass...more time for a coach to build a program. So it may all work for good but there is still that question of propriety. Guess we have to live with it. Perhaps this will entitle the new hire to concentrate on more important things like academics and research.