The Big 12 track and field championships will take place Friday through Sunday at Rock Chalk Park. The meet gets underway Friday at 11 a.m. with decathletes competing in the 100-meter dash and concludes Sunday night with team-championship presentations. 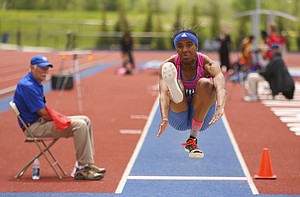 Kansas long jumper Sydney Conley gets airborne as she soars toward the pit during the Women's Long Jump event of the Rock Chalk Classic on Saturday, May 2, 2015 at Rock Chalk Park.

KU is the host school for the first time since the Big Eight outdoor meet in 1994.

The men’s team’s national ranking of 14 is the highest heading into the conference championship meet since the current ranking format came into place in 2008. The KU men placed second in the 2017 indoor championships and the 2016 outdoor meet.

The Kansas women can make it six consecutive years finishing in the top four.

Six KU athletes enter the meet with the best marks of any Big 12 athletes this season: Sharon Lokedi in the 10,000 meters, Sydney Conley in the long jump, Hussain Al Hizam and Jake Albright in the pole vault, Mitch Cooper in the discus and Gleb Dudarev in the hammer throw.