Third-year Kansas football coach David Beaty and his players still have close to six months to get through before the 2017 season officially begins, but it feels much closer than that as of this weekend, with spring practices beginning on Monday.

The Jayhawks still have numerous key performers from 2016 on campus who are eager to capitalize on the momentum created over the final three weeks of what otherwise would’ve been another lost season.

It would not seem as significant to a player or coach at a school known for college football success, but KU put a more competitive product on the field during the final quarter of a 2-10 season, and an overtime win versus Texas — Beaty’s first Big 12 victory — gave all involved with the ever-struggling program hope for better days ahead.

Here are five things to watch as KU enters spring football, a crucial portion of the offseason.

1. A staff changeup could help KU’s offense become productive enough to compete in the Big 12

The Jayhawks only put 17.8 points a game on the scoreboard in conference games last season, which, as you might have guessed, ranked last in the league (by almost 10 points).

KU’s offense, at the time coordinated by Beaty, often hurt the team’s chances while the defense became a strength.

The head coach rightfully addressed the issue on one important front, bringing on Doug Meacham as the new offensive coordinator. Involved heavily, as co-coordinator, with a TCU offense that helped the Horned Frogs win 29 games during Meacham’s three seasons on the staff, the new KU assistant could breathe new life into the offense.

The weeks ahead should provide a sneak peek at any new principles and wrinkles Meacham plans on adding to KU’s Air Raid scheme.

2. How much better now are the Jayhawks who already have demonstrated individual success?

KU only won two games last season, but plenty of players proved they can make an impact in the Big 12. In order for the program to continue its upward climb toward respectability, it will be on those experienced players as much as the new additions to the roster to make sure the Jayhawks can put more wins on Beaty’s résumé. 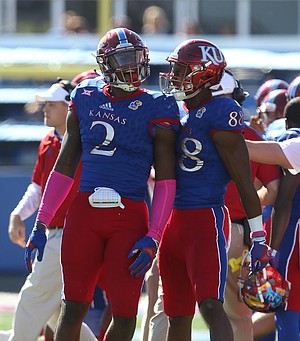 A consensus All-Big 12 defensive end, junior-to-be Dorance Armstrong Jr. already looks bigger in person than he did as a sophomore, when Kansas listed him at 6-foot-4 and 246 pounds, and Armstrong racked up 10 sacks and 20 tackles for loss.

The football program received a surprising influx of talent, via a pair of Alabama transfers, this past August. Receiver Daylon Charlot and offensive lineman Charles Baldwin both joined Kansas during preseason camp, but had to sit out of games in the months that followed due to NCAA rules. 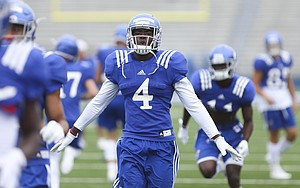 Kansas receiver Daylon Charlot soars back to get in line during team stretches at the beginning of practice on Monday, Aug. 15, 2016 at Memorial Stadium.

Now the KU offense finally gets to unleash two new likely starters who spent time in a national-championship-winning program.

The 6-foot, 195-pound Charlot expects to immediately bolster the receiving corps, and 6-5, 305-pound Baldwin should make it easier for the Kansas offensive line to do its job.

Over the course of the next several weeks, KU’s coaches and players should get a better feel for just how influential their roles will be.

Charlot and Baldwin aren’t the only Jayhawks looking forward to their KU debuts. Beaty and his staff signed eight players in December who have a chance to establish themselves.

What’s more, Kyron Johnson, a three-star linebacker from Arlington, Texas, graduated from Lamar High early in order to get to Kansas ahead of schedule.

All of them aspire to play a role in KU’s success this coming fall, and whether they’re able to so could be determined this spring.

5. Who’s going to be this team’s quarterback?

Stanley, as a red-shirt freshman, started for KU during 2016’s final three games, referenced earlier. The Jayhawks went 1-2 and looked far more competent than they had in many of their previous outings leading up to that.

But Beaty made it clear on the day he signed Bender the program’s newest QB was coming to Lawrence to compete for the starting gig.

Ideally, Beaty and Meacham would like to know far ahead of September which QB will occupy the No. 1 spot on the depth chart.

They’ve already been working side by side since January, in one-on-one and seven-on-seven settings, with the same goal in mind, and things are about to heat up for Stanley and Bender this spring, as they compete for the coveted starting spot.

I hope to see at least a 6-6 season and a minor bowl game. This should be a break-out year for KU football.

I think 6-6 and a bowl game is a very reasonable expectation.

Like others have posted, OL is going to be key because Carter showed that he's a gamer, Peyton is unknown, and our running game was horrible last year in big 12 play.

I just want the Jayhawks to look like a football team.

A couple of items:

Can they tackle? Good tackling hasn't been taught for 5 - 6 years!

Does the Defensive Scheme make sense? They are out of position and have invalid assignments, also for 5 - 6 years.

Your comment is out dated. I am fairly certain you did not watch any KU football games last year.

My number one concern is improvement in the offensive line. We've been bullied there for seven straight years.

I agree. Once we begin to match opponents on both the OL and DL, we will be competitive. Those two areas plus the QB spot have held us back. It appears we have the people to step up in all three spots now.