Kansas City, Mo. (Ap) — Kansas coasted its 13th straight regular-season Big 12 championship in what has become a rite of spring, running roughshod over what is touted as one of the toughest leagues in the country.

Things haven’t always been so easy in the conference tournament.

The Jayhawks ended the two-year reign of Iowa State last year, but that was just their second Big 12 Tournament title in five years. Twice they haven’t even made the title game. And for all its talent, coach Bill Self’s group hasn’t won consecutive tournaments since 2010-11.

“I think the culmination of games down the stretch should give our team some confidence heading into the Big 12 Tournament,” said Self, whose No. 1 Jayhawks haven’t lost since Feb. 4. “For the most part, guys are playing with a free mind. This time of year you want fresh bodies and free minds.”

To help with that, Self gave his guys Sunday and Monday off this week. They returned to practice Tuesday and Wednesday ahead of the quarterfinals Thursday, when the top seed will play the winner of an opening-round game between No. 8 seed TCU and No. 9 seed Oklahoma.

Seventh-seeded Texas Tech plays No. 10 seed Texas in the other opener Wednesday night. No. 2 seed West Virginia gets the winner of that game, while fourth-seeded Iowa State plays No. 5 seed Oklahoma State and third-seeded Baylor plays No. 6 seed Kansas State in the other quarterfinals.

The Jayhawks (28-3) have plenty to play for beyond a title. They’re in good position to land the No. 1 overall seed in the NCAA Tournament, and that would mean playing their first two games in Tulsa — a reasonable drive from Lawrence — and their next two games in nearby Kansas City, Missouri.

“Hopefully the mindset changes in this regard: ‘Hey guys, the finish line is near. You can see the end of the tunnel. Now, what are you going to do?’” Self said. “To me, that needs to be the mindset.”

Other teams also have plenty on the line in Kansas City. Here are some of the story lines:

The Cowboys (20-11) are likely to receive an at-large bid to the NCAA Tournament, but a win at the Sprint Center would take away some of the drama. Kansas State (19-12) is the team desperately in need of a win, especially since it would be a high-profile win against the Bears.

“I’m going to leave it up to the committee,” Kansas State senior Wes Iwundu said, “but you know, we’re a good conversation piece. We’ll be an even better conversation if we do something in the Big 12.”

Speaking of the Wildcats, they could be playing for coach Bruce Weber’s job after missing out on the NCAA Tournament the last two years. Weber guided Kansas State to the Big 12 title game in 2014, his first season in charge, but has lost three of its last four tournament games.

“Our back is up against the wall,” Kansas State’s D.J. Johnson said. “We’re always that way.”

West Virginia routed the Jayhawks at home and nearly won at Allen Fieldhouse, and its frenetic style can cause nightmares. But the Mountaineers are just 2-4 in the Big 12 tourney since they joined the conference in 2012, and their road to the title could include a date with Baylor.

The Bears were ranked No. 1 earlier this season and have the ability to make a deep run. Scott Drew has never won the title, but his Bears have lost in the title game twice in the past five years.

“Theoretically, in most leagues (the 2 seed) is an easier route to the championship,” Huggins said of the stout field, “but in this league I don’t think it really matters.”

With the exception of Jayhawk fans, nobody packs the Sprint Center quite like Iowa State’s legion. They paint the Power and Light District in downtown Kansas City red whenever they show up, giving their team a Hilton Coliseum-like advantage. And with tipoff against Oklahoma State at 11:30 a.m. Thursday, they should get the quarterfinals rocking right from the start.

Longshots have a shot

Baylor was the No. 9 seed when it reached the 2009 finals, and the No. 7 seed when it advanced that far a few years ago. So don’t count out the quartet playing Wednesday night, especially TCU, which beat Iowa State and Kansas State earlier in the year.

I wish the Big 12 would eliminate this exhibition tournament. I get the marketing value of the thing but other than that.... Our guys need to be focusing on the NCAA-T instead of meaningless games.

SMrshll - Wall of Fame "front runner" post of the year.

This should be followed by, "can't Our guys get a couple of bye games straight to Glendale?"

It opens up the possibility that one lower-seeded Big 12 team could win, thereby giving the Big 12 an extra team in the NCAA tourney. Sure it doesn't mean much for KU, but as was pointed out, it means something very important for the teams on the lower half of the bracket.

OSU will make the NCAA tournament, regardless. Of the Big 12 teams not named the University of Kansas, OSU might have the best chance to advance in the post season. They have adjusted to the new rules and play the type of basketball the NCAA promotes (OSU has apparently overtaken UCLA as the most efficient offensive team in the country). The ISU-OSU game should be entertaining, a lot of scoring and little defense. I guess the NCAA transformation of college basketball to look more like the NBA is working (not necessarily a good thing). There is hoping KU plays well in Kansas City this week and in the regionals (if they get past the first weekend).

You're 100% right. That team can really score. Their problem is stopping other teams from putting on a layup show.

When you win the conference by four games, what other headline would be appropriate?

My problem with the tournament is risk of injury and risk that a bottom feeder could be the kiss of death for a bubble team. I think KSU deserves to be included, but as of now they are first four out. 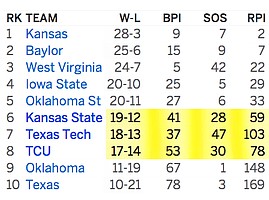 As KU fans we can be pretty jaded. I am pretty sure every other Big XII team and its fans would say they're in favor of a post conference tournament.

In the 32 team NCAA era there were a number of years KU would have liked a chance to earn a bid through a post season tournament.