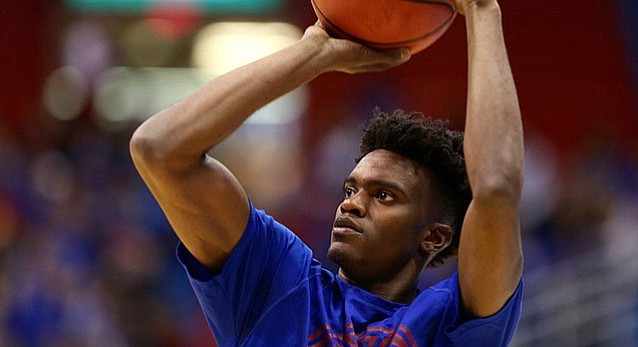 Kansas sophomore guard Lagerald Vick puts up a jumper prior to Tuesday's game against Long Beach State at Allen Fieldhouse.

University of Kansas men’s basketball player Lagerald Vick reportedly was the subject of a KU investigation into whether he hit a female student in 2015.

The Kansas City Star reports that it obtained information that KU’s Office of Institutional Opportunity and Access recommended that Vick be placed on two years of university probation related to allegations that he punched a female student in the arm more than once and kicked her in the face.

The Star, without citing sources, said it learned that the IOA conducted an investigation from late December 2015 to January 2016. The IOA offers its recommendations based on a preponderance of the evidence, which is a lesser standard than the beyond a reasonable doubt standard used in criminal cases. A check of court records indicates Vick has not been charged with a crime related to the alleged assault. It is unclear whether Vick has been placed on probation by KU officials.

Officials with Kansas Athletics and with the University of Kansas’ communications office largely declined to comment.

“Due to federal law and to protect the rights of all individuals involved, the university cannot confirm or deny IOA investigations,” Joe Monaco, director of strategic communications for KU said in a statement.

Vick, a sophomore from Memphis, has appeared in all 21 games for Kansas, starting five. He appeared in 19 games last season. If he ever was suspended by Kansas basketball coach Bill Self last season, it was not made public. Vick, 20, and Self were unavailable for comment Monday night.

A December report of a rape of a 16-year old female in the student housing complex that is home to the KU men’s basketball team and other male students remains under investigation by KU Police. No information has been released about a suspect in that case. Five KU basketball players were interviewed as witnesses in connection with the reported incident.