As the head football coach at Kansas, David Beaty has his hands full with a myriad of responsibilities, so he doesn’t mind letting his players have a voice in at least one critical decision.

The Jayhawks, not the coach, decide on team captains, via private votes. 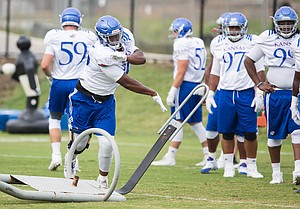 Kansas defensive tackle Daniel Wise throws down a sled during practice on Monday, Aug. 14, 2017 at the grass fields adjacent to Hoglund Ballpark.

“We talk to them all the time about what this means, what this represents for you,” Beaty said of the coaches’ message to the team prior to ballots being cast. “Be careful who you're choosing. It's not a popularity contest. Make sure you understand the representation there is so important for us.”

Although the news couldn’t have come as much of a surprise to the Big 12’s Preseason Defensive Player of the Year, Armstrong is attacking his new status seriously, as he does with all aspects of the game.

“It’s an honor to be a captain for this team. It’ll help me build more character for myself, become a better leader and hopefully it’ll pass down for the guys under me,” Armstrong said.

“First of all, it always talks about your play on the field,” Defense said of attaining captainship. “You want to have a leader who is out there playing, putting in the work, just as hard as you. So with all of those guys, their great workers, hard workers. They see you down, they’re not going to let you be down by yourself. They’re either going to get down with you or bring you up with them.”

There’s even more to it, though, according to Beaty. The third-year KU coach said what makes the captains unique is not only their work ethic and willingness to do more on the field, but their commitment to everything else involved with being a Division I athlete. 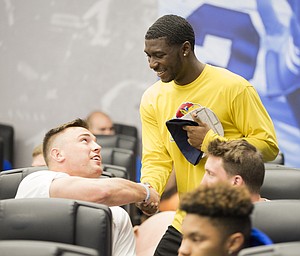 KU’s coach said Armstrong, Wise, Dineen, Booker and Evans set such good examples that “98 percent” of their teammates fall in line with their approach. Beaty thinks the leaders have established they will “do the right thing no matter what.”

Defense put it another way: “Those guys are smart. They’re not one of those guys you’d have to worry about.”

While Defense said no one on the roaster is a bad person, sometimes bad decisions are made. Such instances never involve the newly-elected captains, he added.

“Those are some of the guys who they’re always on the right track, no matter what. You never can really see them doing the wrong thing,” Defense said. “That’s the kind of guys we want to represent all of us.”

We're honored to have you leading our program.

great article & classy! first sentence use of 'myriad' doesnt make sense tho: either 'myriad' or 'a myriad of' exactly the reason not to use this trite word. 'plethora' is bad too. just fyi

2 more days!!! Does anybody think Tulsa has a real chance against Okie st tonight? Im also wondering what people are thinking about the Texas Tech vs Eastern Washington game this weekend? Have seen some sites picking EWU for the upset! Would also like to see Turner Gill take down Baylor although it makes the conference look bad ill still root for Gill.

Why would you root for Turner Gill? He ruined KU football!

I think Gill's biggest make was hiring "third and long" Chuck Long as his OC and trying to run a pro style offense maybe things would have turned out differently with an actual spread or option type offense. I would have rather seen Kale Pick stay at qb and run an option or triple option type offense rather than Jordan Webb but we will never know....even though his teams weren't competitive I do agree he should have been fired and even set KU back a couple years, but he did nowhere near the damage Weis did to this program and even though his teams weren't competitive I still think Gill's recruiting was decent. All that said he is just an easy guy to root for similar to a Charlie Strong in my book. That's why i'll still root for him why not root for an underdog like Liberty just my opinion