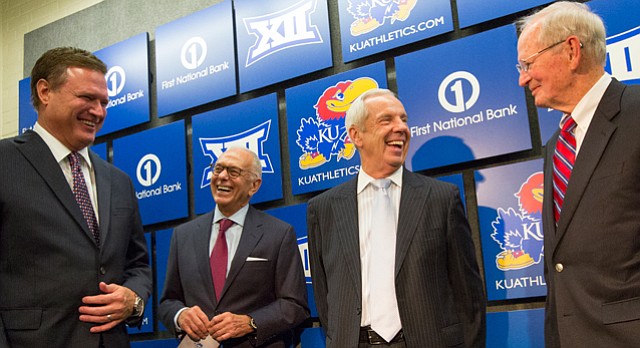 Although Kansas coach Bill Self revealed his choice several weeks ago, the pick became official on Thursday, when the Naismith Memorial Basketball Hall of Fame announced the presenters for this year’s class.

Each year, the men and women being inducted into the Hall of Fame are asked to select someone who already is in the Hall to present them on their big night.

For Self, that big night is now less than two weeks away and the man who will introduce him at his induction ceremony on Sept. 8 in Springfield, Mass., is former Kansas coach and Self friend Larry Brown.

According to a press release, the members of this year's class "were asked to select a previous inductee to accompany and present them to their peers. The choice is solely the decision of the incoming Hall of Famers and those selected as Presenters consider it a great honor to be chosen. More than 50 Hall of Famers are expected to be in attendance for this year’s ceremony."

Inducted into the Hall of Fame in 2002, Brown told the Journal-World last spring that he previously had the pleasure of presenting some of the biggest names in the game on their memorable nights in Springfield.

Like Brown, who graduated from North Carolina in 1963 and was presented on his induction night by former UNC coach Dean Smith, one of them had ties to both Kansas and North Carolina.

Brown and Smith co-presented former Kansas coach Roy Williams at his Hall of Fame ceremony in 2007. Williams, of course, coached the Jayhawks for 15 seasons before returning to Carolina, where he has led the Tar Heels to three national titles since 2005.

As figures to be the case with Self, who jump-started his coaching career as a graduate assistant on Brown’s staff at KU during the 1985-86 season, Brown said the opportunity to share that kind of moment with someone to whom he was so closely connected merely added to the experience.

“I’ve been lucky,” Brown told the Journal-World. “I’ve been allowed to present a lot of guys, which I tried to explain to them the magnitude of what’s happened but I still haven’t (fully) grasped it. It’s blowing me away just thinking about it and walking around the Hall of Fame and seeing the people that I cared about that are in it and I know what they’ve accomplished.”

— The following is the list of 2017 inductees and their presenters:

Class of 2018 point guard Devon Dotson is scheduled to make his official visit to KU this weekend.

According to Matt Scott, of TheShiver.com, the 6-foot-2, 180-pound point guard was “one of the top players on the UAA (Under Armor) circuit the entire spring and summer.”

247 Sports currently lists Kansas as the heavy favorite to land Dotson, as the No. 7 ranked point guard in the 2018 class is registering a mark of 93 percent in the site’s crystal ball rankings.

KU assistant Norm Roberts, and, of course, Bill Self, are the lead recruiters for Dotson, who also is considering Florida, Maryland and Miami, among others.