Sure, new Kansas football coordinator Doug Meacham is in charge of the entire offense. But when Meacham runs back and forth across the practice fields he finds himself zeroing on the receivers he coaches.

So if you ask him after a preseason camp session how KU quarterbacks looked, he’ll answer honestly. He doesn’t study Peyton Bender or Carter Stanley, leaving that to their position coach, Garrett Riley. After practices conclude, Meacham dives into the video footage of the QB’s. But his on-field focus is devoted to their targets.

Camp just began Monday, so the first receivers the coordinator mentioned were the ones he’s just getting to know.

“Seems to be a savvy guy,” Meacham added of Williams, from New Orleans. “I really like those guys. Man, we needed them, too.”

Receivers such as Hampton and Williams have a better chance at cracking KU’s rotation now, with the departure of would-be senior LaQuvionte Gonzalez, who was kicked off the team before the start of preseason camp. 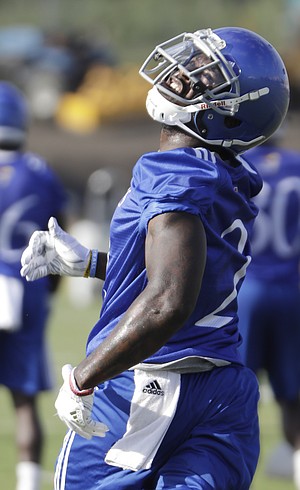 Kansas sophomore receiver Daylon Charlot looks back as he prepares to catch a fade pass in the team's second practice of fall camp on Tuesday, Aug. 1, 2017.

“First day non-padded you can’t get too excited,” Meacham added. “I think you can get real excited early and be disappointed later. But they’re all locked in.”

He estimated they run 12 to 15 plays per day. Then each time they re-visit a certain portion of the playbook, he may tweak some things or add a different formation or motion.

“Just trying to get as much film as you can of them doing our base plays,” Meacham explained, “so that when we start game-planning they’re familiar with it.”