When David Beaty spoke to his 87-year-old mother, Bobbie Ford, following his Kansas football team’s Saturday home loss to Ohio, she told her son the same thing everyone who watched the game was thinking, too.

"Y'all got to hang on to that ball when they punt it to you,” Beaty said of her opening line in their conversation.

His mother, of course, was right. That’s why after the Jayhawks gave away two offensive possessions in the 37-21 setback due to junior LaQuvionte Gonzalez muffing two punt returns he decided to add punt-catching coach to his list of responsibilities.

Since the day Beaty arrived in Lawrence to take over the perpetually rebuilding program he has advocated for KU improving in special teams and playing mistake-free football as a way to speed up the reclamation process. So he didn’t hesitate to involve himself in solving the punt return problem.

After suffering a 37-21 loss against Ohio, Kansas football coach David Beaty met with the media to talk about what went wrong in that loss, his decision to take coaching responsibilities on punt return, looking ahead to Memphis and much more.

“That's why I'm doing it,” the head coach said of stepping in. “(Ohio) played a complementary football game and we struggled to play together as a unit throughout that game… The third quarter was a pretty good exception to that. And then we turned it over again.”

Indeed, after an early third-quarter TD pass from Montell Cozart to Steven Sims Jr. cut Ohio’s lead to 28-14, KU didn’t get the ball back following a defensive stop when Gonzalez fumbled another punt.

“We had some momentum going,” Beaty said of that critical juncture and miscue. “It would have been nice to see, had we been able to take care of that last punt, what could have happened there, because we had some things going there. There were some things that we did well (in the second half).”

When asked who used to coach KU’s punt returners at practices, Beaty declined to answer during his Tuesday press conference.

According to Beaty, his hands-on approach won’t include replacing Gonzalez, a junior receiver he has known since their time together at Texas A & M, as the Jayhawks’ primary returner. The coach remains confident in Gonzalez, who through two weeks has accumulated three punt returns for a net of -2 yards because of the blunders. In a Week 1 drubbing of Rhode Island, Gonzalez, who mostly has been limited to making fair catches, returned a punt 17 yards.

As a receiver, Gonzalez leads Kansas (1-1) with 12 receptions. His 123 receiving yards trail team-leader Sims (238), and he caught a touchdown pass versus Rhode Island. 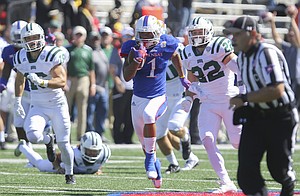 Kansas wide receiver LaQuvionte Gonzalez (1) runs back a kickoff for a touchdown during the second quarter on Saturday, Sept. 10, 2016 at Memorial Stadium.

And who knows how much worse KU’s loss to Ohio (1-1) would’ve been had Gonzalez not given the Jayhawks some hope with a 99-yard touchdown on a kickoff return in the second quarter, when Kansas trailed 25-0. So there are visible examples of why Beaty remains confident in the 5-foot-10 dynamo from Cedar Hill, Texas.

“Oh yeah. Quiv is talented now,” Beaty said. “Quiv, he's a threat to take it to the house any time he touches the football. So we have to find a way to help him with those things. His mistake was very simple. He didn't beat the ball to the spot. He took his eyes off it. That's a cardinal sin when you're a punt returner. You cannot take your eyes off. You have to trust your guys that are blocking. If you're going to return it, you don't get to look down. He did it twice. We tried to solve it on the first one and then obviously we got him some relief after that.”

“He's doing a lot for us,” Beaty said, “and we've got to make sure that we monitor, you know, his focus level, because of his level of fitness. See if he's OK to go. So there's some things that we can do there to help him.”

KU football learns from Ohio loss, looks ahead to Memphis by KUsports.com

This guy's a highlight reel waiting to happen. Got to find a way to get him the ball.

This is a smart move. I love that Gonzales is a Jayhawk. He has the ability to catch the ball and make a couple of guys miss in certain situations, but we just needed to maintain possession and get the ball back to our offense that was performing quite well in the 3rd quarter. He made two huge mistakes that really hurt Saturday. We were only down by 7 when he muffed the second one and we didn't score the rest of the game. I hope he learns the lesson quickly and just concentrates on his duty to catch the ball, let the other guys concentrate on theirs. If there isn't room, just call for the fair catch. We have some guys at WR that are legitimate big play threats, including Gonzales.

With that said, it was not all on Quiv Saturday. The team showed no intensity for most of the first half and let Ohio get out to a lead. The whole team still has some maturing to do, but I think that it will happen in time and this time next year we might be talking about bigger goals.

I thought the new special teams coach, Joe DeForest was a "god-send'. I guess his role was everything but coaching the punt returner.

Does not look good.

I guess Beaty will be coaching everything by the end of the season. I don't see another win on the horizon.

My thoughts exactly.. Coaching more positions is not an answer...I think we need a new Head Coach. Beaty is a nice guy, but does not know how to delegate.

Spreading the head coach too thin. Beaty heaps praise on Joe DeForest as a special teams guru and now he will coach part of the special teams. Nothing worse than undermining your assistant coaches. Please focus on the other roll you assigned yourself, offensive coordinator. The primary reason KU lost, was the deplorable first half and much of that was the result of 21 total yards of total offense (compared to 359 for Ohio) due to horrible play calling and poor execution.

Is Beaty the only coach who can teach Gonzales how to catch?

I have to agree with most of these comments. Taking roles away from your staff is called "micromanaging" and is never a good sign. It undermines the confidence of your staff by sending messages that you don't trust them and it draws your attention away from being a overall leader for the program as a whole. There is a reason for assistant coaches...one person cannot do it all and survive.

What does this mean: “and we've got to make sure that we monitor, you know, his focus level, because of his level of fitness. See if he's OK to go."

I'm not asking about the focus part, that part is obvious. But what is meant about his level of fitness?

I read that as tracking/monitoring Quiv's health so we aren't wearing him down by week 6 and getting less production in the second half of the season or worse. Being explosive is a huge benefit in that he can change field position and make something happen every time he touches the ball (both good and bad as demonstrated against Ohio), but it also means that he could be overused and become worn down if he's returning kickoffs, playing receiver, and returning punts each game. Not only is that a lot of running, but more importantly that's a lot of hits to absorb over the course of a season.

If the coaches determine he's going to add only marginal value on a punt return compared to the next best option, I'd rather pull him from that responsibility and focus just on receiver and kickoffs. Prevent the possibility he gets blown up on a punt and hurt for an extended period of time that would pull him from any sort of activity and benefit to the team.

As for the comments about Beaty doing too much, I agree that this is a lot for a coach to take on. I think it is partly Beaty wanting to own the job and take any potential blame which I can't fault him on, coupled with his background as a special teams guy. The good news in this though is that Jesse Newell (I believe) had a tweet that punt practice is normally going on during pre-practice stretching so he wouldn't be missing anything in practice and his responsibilities coaching the offense. We'll see how it goes in the next few weeks and if this move pans out. I for one hope it does and we can reward the defense for getting crucial stops, unlike the two fumbles this past weekend. Let's get a win this weekend and break our road game streak.

Comments section needs emojis. Particularly one with the palm to face and shaking of head no.

I'm on board with the majority here: he can't coach the whole dang team himself. He has to step out of his position coach mindset and let his coaches do the jobs he hired them to do. If they can't do it well enough for his standards, then he needs to hold them accountable and/or send them back to the job market.

If he is going to do this job he should have just done it and not announced it. This announcement does not spread confidence in Jayhawk nation. You should be hiring guys you can depend on to coach the team they are assigned. Coach your coaches but don't take over their responsibilities. Or hire people that can do their job. But don't make this an issue, just run your program. I don't believe this is something that needed to be announced. It's just another bad look in a long list of bad looks we have endured. smh