With D'Andre Banks back at right tackle, KU O-line at its best

Back in August, University of Kansas offensive line coach Zach Yenser made senior tackle D’Andre Banks a promise. Yenser didn’t know when exactly, but the coach told one of his most talented linemen he intended to get Banks back to playing right tackle.

After weeks’ worth of practices and four KU football games, Yenser finally had a chance to follow through last week. Banks started at right tackle against TCU, returning to the position he had prepared to play all offseason.

The Jayhawks’ O-line coach and run coordinator knew all along Banks would be better off on the right side of the line. However, when projected starting left tackle senior Jordan Shelley-Smith suffered a concussion in preseason camp, Yenser was left thinking, “What do we do?”

Forced to scrap his plan to bookend KU’s line with a senior at each tackle, Yenser soon realized true freshman Hakeem Adeniji arrived on campus ready to compete for a starting position. Still, the idea of a rookie lineman with no college experience protecting the quarterback’s blind side didn’t exactly appeal. So Yenser asked Banks to switch, and start at left tackle while Adeniji got acclimated.

The Kansas football team's defense has made serious strides since a season ago and is one reason longsuffering KU fans should feel a little bit better about the program's future. KUsports.com's Matt Tait and Benton Smith discuss.

Banks played right tackle at Trinity Valley Community College before transferring to Kansas. And though the 6-foot-3 lineman from Killeen, Texas, started 12 games at right guard for the Jayhawks in 2015, as soon as the season ended he began transitioning back to his natural position. Banks took reps at right tackle throughout spring and preseason practices before an injury to Shelley-Smith, who eventually retired from football due to his history of concussions.

After witnessing Banks shift sides and start three games for KU at left tackle this season (he started at right guard and played some left tackle against Memphis when Shelley-Smith briefly returned), Yenser applauded the senior for his unselfish approach.

“And doing what he feels like the team needed to win,” Yenser said. “Sacrificing. You’ve gotta commend him big-time for that.” 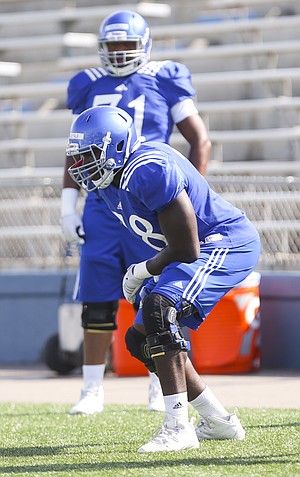 Hakeem Adeniji gets set as he works out with the rest of the offensive line during Kansas football practice on Friday, Aug. 19, 2016 at Memorial Stadium.

Once Adeniji earned his coaches’ trust, Yenser delivered on his promise to Banks the Monday before the TCU game. From left to right on the O-line, KU started Adeniji, junior Jayson Rhodes, junior Joe Gibson, redshirt freshman Mesa Ribordy and Banks. With that combination, in a 24-23 loss to the Horned Frogs, the Jayhawks put up new season-highs against FBS opponents, with 122 rushing yards, 348 passing yards and 470 yards of total offense.

“Banks played his best game that he’s played since he’s been here, graded out at 86 percent,” Yenser shared. “That’s even counting the holding call — whatever they want to call it — on the chop block.”

“I know we got a little more push on the O-line,” Gibson said. “I don’t know if that was because of the switch or because of just what we’ve been doing in practice and getting better, and stuff like that.”

KU (1-4 overall, 0-2 Big 12) started the same combination of players up front in each of the first two games this season, but hasn’t been able to pull off back-to-back weeks of line continuity since. Yenser expects that to change Saturday at No. 11 Baylor (5-0, 2-0), when he’ll have his new — and best — combination of linemen starting once again.

“The key to it was getting Banks back on the right side where he can play more confident,” Yenser said, “and be the dude that we know he is coming out of spring practice and fall camp.”