Three missed fourth-quarter field goals. Four first-half turnovers. On the wrong end of a play that started so well, slipped into a bizarre intermission, and ended so badly.

Once the fog clears from those and other disappointments and legitimate nitpicks from Saturday’s 24-23 loss to TCU in Memorial Stadium, the reappearance of a long-missing emotion ruled the day: Hope.

For the second week in a row, Kansas took a noticeable step forward and this time the step was twice as long and loud because the Jayhawks went from competing nose-to-nose for two quarters to doing it for four.

In the process, Kansas proved it has a legitimate Big 12 defense that knows how to drag extremely successful quarterbacks out of their comfort zones and onto the turf.

A week after harassing Texas Tech’s Patrick Mahomes II and forcing him out of the game with an injury, Kansas intercepted TCU’s Kenny Hill three times and limited him to 206 passing yards and one touchdown through the air. 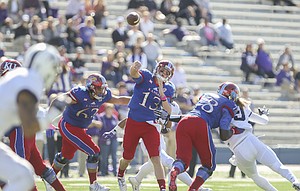 View a gallery of images from Saturday's game between the Jayhawks and Horned Frogs at Memorial Stadium.

Hill was coming off a 449-yard passing day with five TD passes and one interception in a 52-46 loss to Oklahoma.

And the Kansas defense made it happen with four starters unavailable because of injuries.

At linebacker, sophomore Keith Loneker made his first career start a memorable one. Senior Courtney Arnick, whose mother Carla, a breast-cancer survivor who represented the team at the coin flip on breast-cancer awareness day, honored her with a big day.

The defensive game plan worked so well that the Horned Frogs didn’t score until five minutes into the second quarter.

“You hope young guys by the time you get to the fifth or sixth game, you’re going to make some progress, and they did,” Kansas second-year head coach David Beaty said.

KU made the Horned Frogs turn it over four times and held them to 366 total yards, nearly 200 yards under their season average. TCU converted just 4 of 13 third-down plays.

Speedy defensive end Dorance Armstrong had another strong performance, spending a lot of time with Rosser in the backfield.

“Rosser is a guy we don’t talk about a lot, but man, we couldn’t block him in fall camp,” Beaty said. “I figured it might be just a matter of time before he gets to the backfield and makes some TFL’s and sacks.”

“He’s starting to get healthy,” head coach David Beaty said of Stewart. “He looked like a real guy out there today.”

The trick now becomes bringing that same competitiveness and playing close games against other Big 12 foes.

And, of course, learning to win the close ones would be the next step.

All in due time. Saturday’s steps were the first loud ones in the right direction, the loudest one coming in TCU’s backfield by a defense that believes in itself and is justified in doing so.

This Kansas defense is for real.

have to agree Joe. They starting to look kinda salty - -nice to see progress, thing is we have enough under classmen that I think we are for sure headed in the right direction. Thing is and people just have to remember there are SO MANY explosive offenses in this league real easy for teams seems like to score 40-50 points. Oklahoma, Okla St, Baylor, Texas Tech but we moving the right way for sure

They certainly looked legit today. Going into this game TCU was the 5th rated offense in the country.

Can't wait to see this Defense in 2 years with legit depth and 2 more recruiting classes.

We've played some close B12 games in the last two years, too. I wouldn't call it progress until there's a W.

Wins are simply one aspect of a programs progress. If you don't see any progress unless a W is delivered........well, I suppose you won't wont see a lot of progress this year. It takes progress in every facet of a program to start realizing Ws. I saw lots of it yesterday. Hope restored...

Bowen is showing everyone that he should have been named the HC.

Maybe...maybe not! Being a good OC or DC, doesn't make you a good HC. I like the sentiment, but we'll never really know!

When he took over for charlie tuna he had them playing with more passion and discipline. he would be a solid HC

At least the offense was good enough yesterday to keep our poor defense off of the field long enough to have something left in the 4th quarter. As they say out in western Kansas, be careful because "you can ride a good horse to death."

I've always been a critic of Clint Bowen (for good reason).

However, I give he and his defense props in this game.

Maybe he has developed into a fine DC after all these years of getting hammered by Big 12 offenses.

Keep it up defense...build on it for the future.

It's tough to keep from being hammered by B12 offenses when you can't get decent personnel on the field. Recruiting has to be there along with coaching. It's tough to coach up inferiority into something that can stand up to most B12 offenses.

No, it is some position coaches who are improved. The DC is insufficient. And the OC play calling wasn't even up to average. Get two really capable co-ordinators and we''ll see huge improvement!

Gotta admit that 4th down call on the last drive was a good one.

There was so much noise from some about Bowen not knowing what he was doing, but I was always hopeful that talent was the real issue. I'm beginning to believe my own sales pitch, and I'm hoping the same will be said of Beaty in a couple years. But this isn't the first time we've been hopeful from a good showing, now we have to keep the momentum and get a win or two. The Big XII is down, I feel a conference win coming...maybe two, if we can just keep getting better.

This week is huge, given KU's propensity in recent years for following up a hopeful sign with a blowout loss. Let's see if they can start to show some consistent progress.

It's been exciting to see the development of the defense this year. I'm also encouraged that we have at least a decent QB (who, as virtually everyone knows, should have been starting all year). Now if only we had a decent FG kicker.

One other concern: several more bizarre play calls. Why oh why couldn't we have run a QB sneak when we were six inches from the goal line??? (Of course the play before that should have been ruled a TD anyway, but that's another story.)

It's too bad that not a single defensive player recovered the fumble that Kenny Hill picked up and moved down the field. That was probably the play of the entire game. Kansas would have had the ball that TCU eventually scored on. We might have scored either a field goal or a TD instead of TCU.

Not really. The defense then held and forced a fg. Tcu would have gotten the first down and might have used the rest of the clock thus giving us no chance!

TCU would have still had the ball due to the facemask penalty, but the field position would have been drastically different.

I think we finally saw how good our defense is if they are not on the field ALL day. Bowen can`t work miracles with a group of guys that are tired from all the 3 and outs....the offense did their job by sustaining some drives. Finally both sides of the ball worked together as a TEAM and we are seeing progress!! I am proud to say I was there and will be back...ROCK CHALK!!!!!!!!!