Kansas guard Aisia Robertson rolls in for a shot during Late Night in the Phog on Saturday, Oct. 1, 2016 at Allen Fieldhouse.

After sitting out all of last season because of the NCAA transfer rule, Kansas women’s basketball guards Jessica Washington and McKenzie Calvert were more than happy to step back on the court at Allen Fieldhouse on Saturday.

For Washington, a transfer from North Carolina, it was her first time to play in front of the home crowd.

She didn't participate in the Late Night in the Phog festivities last year because of a hip injury and she made up for lost time in the 12-minute scrimmage against the team’s volunteer male practice players.

“It was insane. The crowd got us really hyped up,” said Washington, who recorded a team-high six points, three assists and three steals in seven minutes. “I know we’ve been waiting a long time to finally get out there. We took advantage of the opportunity.”

Washington, who started in the backcourt alongside Calvert, helped the Jayhawks to a 34-13 victory over the practice players. KU shot 14-of-24 (58 percent) from the floor.

Before the scrimmage, the Jayhawks performed a dance routine for the crowd of 16,300. Then, former KU standout Tamecka Dixon was honored at mid-court and spoke for a few minutes. Dixon will be inducted into the Kansas Sports Hall of Fame on Sunday in Wichita. 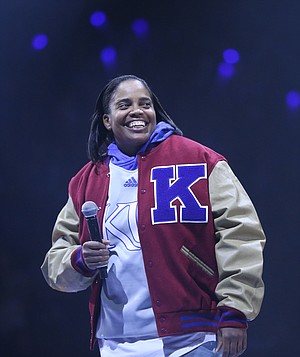 Kansas great Tamecka Dixon hears the roar of the crowd as she is introduced during Late Night in the Phog on Saturday, Oct. 1, 2016 at Allen Fieldhouse.

“The whole point of Late Night is to have fun and introduce basketball season,” Washington said. “Yeah, it’s supposed to be serious, we’re supposed to look good and have fun at the same time, but there was a lot going on. It was a lot of fun.”

Calvert scored five points on 2-of-5 shooting, adding two rebounds and an assist in seven minutes. The 5-foot-9 transfer from Southern California said sitting out last year helped her learn the strengths of her teammates, which has translated to her play on the court.

“It’s a blessing to finally be able to play and getting out there with those girls — and finally not having to just watch," Calvert said.

Way to talk about recruits that were there. And our post from Minny who committed earlier. O wait this is Kusports. Hell the mens coverage was pi ss poor too.