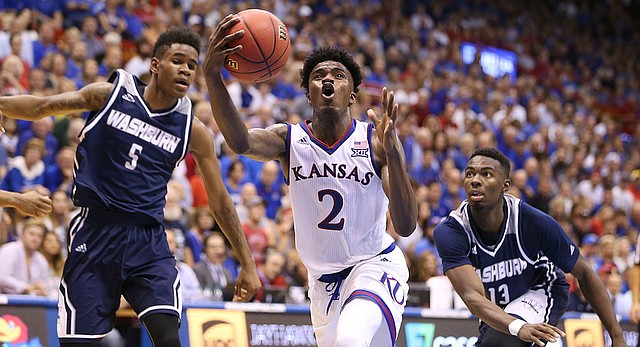 Coming off a freshman year in which he played just 91 minutes in 19 games, Kansas guard Lagerald Vick said Monday that he had no idea he would be quite this comfortable nearly this quickly during his second season with the Jayhawks.

Last week, that cozy feeling — along with his overall production — landed Vick in the starting lineup for KU’s victory over UNC Asheville and he’ll be there again at 7 tonight when the Jayhawks (5-1) play host to Long Beach State (1-7) at Allen Fieldhouse.

“That helped me,” said Vick of earning the start. “I’m still kind of figuring out things but that definitely gave me a bigger lift. I feel pretty comfortable now. I’m just listening to Frank (Mason III) and Devonte’ (Graham) and the guys that have done these things before.”

Kansas coach Bill Self called Vick “a pleasant surprise but not a shock,” and emphasized that he was in the starting lineup, at least for now, as much because of the shortcomings of others as his own strengths.

With starting forwards Landen Lucas and Carlton Bragg Jr., struggling out of the gate, Self has gone to the four-guard lineup to start games, with Vick and freshman 7-footer Udoka Azubuike filling the spots once held by Lucas and Bragg.

“I don’t know that that’s our perfect lineup moving forward,” Self said. “It may be. I don’t know yet. I think he’s prepared to have a good year and it doesn’t surprised me how well he’s done.”

Through six games, Vick ranks fourth on the team with an 8.7 points-per-game average and also is second in both rebounds per game (5.5) and offensive rebounds (11). He's shooting a team-best .857 from the free throw line and .477 from the floor, including a mark of just .235 from three-point range.

Eight games into the 2016-17 season, 1-7 LBSU has played just once at home while playing and losing at Wichita State, at North Carolina, at Louisville, at UCLA and at Washington.

The other two games away from home — both losses — came at Florida Gulf Coast’s home gym, where the 49ers lost to FGCU and Binghamton.

“I’m gonna talk to (LBSU coach Dan) Monson about that when he gets here,” Self said. “I don’t know what he’s doing.... They’ve only played one home game and that was the first game of the season. You watch, he doesn’t have a good non-conference record, but is probably the third most talented team we’ve played and they’ll be the team that’s favored to go to the NCAA Tournament because they’re favored to win their league.”

Jayhawks move up to 4th

After opening the season at No. 3 in the AP poll and falling to No. 7 after a season-opening loss to Indiana, the Jayhawks have climbed their way back into the Top 4.

KU is ranked fourth in this week’s poll, up one spot from No. 5 a week ago. Heading up the poll in front of Kansas are Kentucky (40 first-place votes), Villanova (20) and North Carolina (4). Duke rounds out the Top 5, while Big 12 foe Baylor (6-0) received the final first-place vote and jumped from No. 20 to No. 9 after wins over Michigan State and Louisville.

Kansas freshman Josh Jackson on Monday earned Big 12 newcomer of the week honors for the second week in a row.

Named the MVP of last week’s CBE Classic, Jackson averaged 18.5 points and 9 rebounds in Kansas victories over UAB and Georgia.