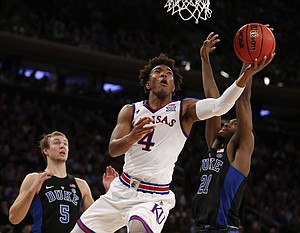 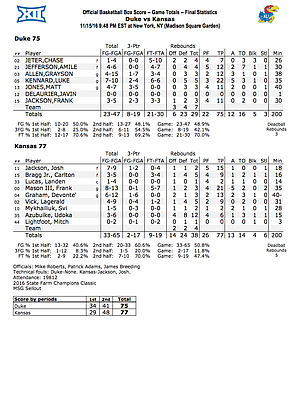 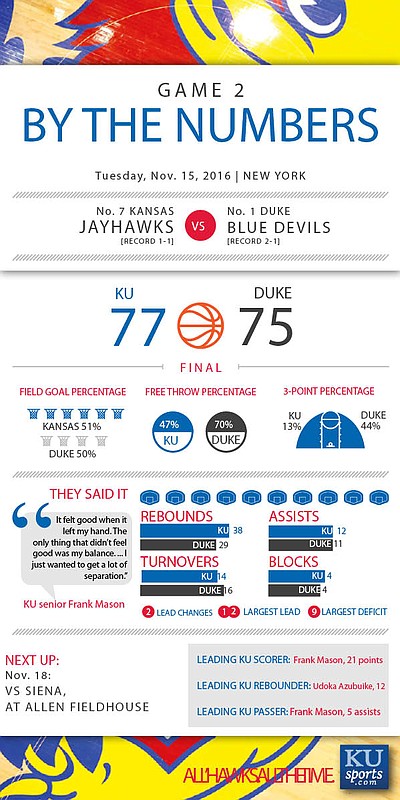 This game is a good confidence building for both JJ and Udoka. Their performances tonight was impressive against a ranked & systematic team like Dook. I dont' care if their best players didn't play. I hope to see these two freshmen keep producing consistently. Huge contribution. Our players really stepped up big tonight.

I agree with you Steve. JJ was the played the best in the second half, Mason capped it off, but in my opinion, although far from having the best performance, it was Az that actually sparked the team. Welcome to the Land of Az!

Steve, I agree. Any time you beat Rat Face and his Pukes you've had to play a good game. However, you really can't ignore the fact that 60% of their front line was sitting on the bench with suits and ties.

I am pretty sure it might have been a different game but let,s revel in this very nice victory and use this as a step towards establishing the ultimate team chemistry needed for a NC!!!

People will wonder about the freshman sitting but really we probably would've beaten them harder with them playing. At the end of the season our freshmen have more experience against upperclass than duke will.

Duke lost because they only shot 11 more free throws, below the usual margin of 12 per game.

Stupid refs.. the FT stat is so lobsided. Good observation.

Literally the dumbest basketball remark in the history of basketball.

This was a huge NCAA seeding win for the Hawks, especially following the IU loss. Wit the weak Big 12, we only have the UK at Lexington game left on our schedule for another impact win. The Big 12 will probably do better than most expect but we still will not have that many top 25 teams....perhaps WVa and Baylor to go along with Kansas.

Kenpom (www.kenpom.com) is the one that matters, where BU, WVA are the highest ranked at 17 and 24,respectively. Looks like we will have ver few opportunities for Top 25 wins but nearly every game, including pre-season, can be a Top 50 win. From top to bottom, the Big 12 will be very good *not great) and competitive.

Baylor wiped Oregon out of the top 10. I know their pre-season All American did not play but that was a significant victory.

Great intensity on defense and rebounding won that game! Udoka is ready to start given Landen's injuries. The more minutes Udoka can get with the other starters, the better. He was an absolute beast at the 5 and that is what this team needs. He controlled his fouls fairly well.

I agree. Udoka Az sparked the team because he changed the trajectory of Duke's shots. IMO, Az should get 20-25 minutes every game. And I think we should change things up and rotate from a 4 guard lineup to a 3 guard lineup. This will make it hard for teams to adjust and it will prepare us for great rebounding teams with really huge lineups. So Start JJ with Az and rotate Bragg for the both of them, from Center to PF (5 to 4). This would mean that Az and Bragg would be on the court together about 20 minutes per game giving KU more power in the middle for those 5-10 minutes that JJ catches his breath. Just a thought.

Incredible win for the Jayhawks last night - I can't remember the last time a KU team showed that much grit when overcoming a deficit and getting the W. Frank had some mental lapses on defense and you can tell Landon is not 100 percent physically, which they're going to need later on down the line - but when this team gets after it defensively, they're a tough out.

And Josh Jackson. Forget what he brings to the court in terms of basketball skill - mentally - and I know he was all over the place last night - but he brings a mental toughness and more importantly - an attitude, that this team hasn't had since the '08 team. He's a monster. Slapping the ball out of guys' hands, dead ball or not, slapping the floor on D, showing the emotion after the cheap foul calls 4&5 - we haven't seen that out of KU Frosh - ever. This kid is as good as advertised and I fully expect once the light bulb comes on - Watch out. Svi is still too reticent for my taste - but LeGerald Vick is going to be an X-Factor for this team. He is a junkyard dog at the Guard spot. Sure he didn't knock down any threes last night, but his drive from the corner was impressive, plus he was in Grayson Allen's grill all night. This is going to be a fun team to watch this year. Great win last night - Great day to be a Jayhawk.

Vick shows potential, he could be better than most on the team if he gets the minutes and mindset. Svi is playing european ball, he isn't aggressive enough for nba or final four.

Did you watch the game? Mykailiuk had a very nice game in all aspects except shooting the ball.

Love the grit of this team! Josh is a quick study. It won't take long for him to figure out how to channel that incredible competitive nature and then - look out. It'll be Fearless Frank-like... unstoppable. Props to the AWESOME veterans to get to him in the heat of those moments. AND props to Josh for the maturity to listen to the older, wiser, been-there guys. It's all a part of learning to play big time college basketball.

We need Lucas to get back to last year's form!

we need to rest him and get back to form for the end.