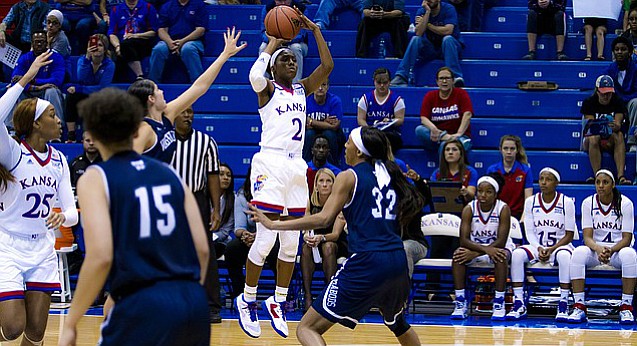 Kansas sophomore McKenzie Calvert pulls up for a jumper during the team's exhibition game against Washburn University on Sunday, Nov. 6, 2016.

With 7:16 to go in the third quarter, Kansas sophomore guard McKenzie Calvert swiped a pass from Washburn’s Reagan Phelan.

The third quarter theft marked the 20th turnover forced by the Jayhawks defense, which equaled their mark in the exhibition opener against Fort Hays State last week.

In Sunday’s 81-57 victory at Allen Fieldhouse, the Kansas women’s basketball team forced 27 turnovers — including 18 in the first half — to close out its two-game exhibition slate on a high note.

“I don’t think any team in the country has developed who they are going to be at this point in the season,” coach Brandon Schneider said. “We sure would like to establish more of a defensive identity. Just be a little harder to score against.” 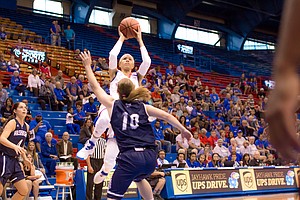 After being disappointed with the defensive effort in the opener, Schneider emphasized putting pressure on the opposition. And that was evident from the early going.

The Jayhawks rattled the young Ichabods, creating four turnovers on as many possessions to open the game.

“Kansas can really get out and pressure you,” Washburn coach Ron McHenry said. “We had a hard time just getting the ball entered in the offense. They are all athletic at that guard spot.”

However, it did not lead to points. At least not at first.

Kansas settled for jump shots for much of the first period, as it traded buckets with Washburn in the opening quarter. Then in the final minute of the first, the Jayhawks defensive unit stepped up on consecutive possessions.

With 55 seconds to go, Washburn was called for a five-second violation underneath their own basket. Calvert then went down and got her first points on a layup, giving Kansas a four-point advantage.

On the next trip, the Ichabods were flustered into an errant pass that soared out of bounds. Junior guard Jessica Washington drew contact on her way to the hoop afterward, sinking both her free throws to close out a 10-point first period, giving her squad a 21-14 lead.

“I always like to be in that zone,” said Washington, who scored a game-high 21 points. “I do realize whenever I’m on, I have to be aware of that. But with my teammates stepping up on defense, it allows me to get those open looks.”

Kansas continued to create suffocating pressure as the lead grew larger for the remainder of the contest.

The Jayhawks accumulated 32 points off turnovers on the afternoon. Calvert led the way with four steals and sophomore guard Aisia Robertson notched three thefts. Seven other KU players logged a steal as well.

“I take a lot of pride on defense,” Robertson. “I think that sets the tone for the rest of the team. When I’m guarding the ball, I have to make her put her head down so she can’t run her team.”

Roberston came off the bench and dropped 14 points in 14 minutes of action. Sophomore guard Kylee Kopatich joined her and Washington in double-digits with 12 points, including 2-of-2 from deep.

“The big thing for (Aisia) this year is she understands her game,” Schneider said.

Now the Jayhawks will turn their attention to the regular season after sweeping exhibition play. The confidence is high as the team looks to put last year’s 6-25 finish behind them.

“It gave the world a view of what Kansas is like this year,” Robertson said.

Kansas will play host to Missouri State at 2 p.m. Sunday.