In other words, it took about five seconds for the Kansas University hoops targets to live up to the hype as MoKan drilled Michigan Select, 89-40, Saturday afternoon before about 300 fans in Sports Pavilion Lawrence.

“I think sometimes when people think of Trae they think of a scoring point guard. He’s really shown the past couple weekends he’s just as good a facilitator as a scorer,” said Porter, a 6-foot-8 junior forward from Tolton Catholic in Columbia, Mo., who soon will be playing his senior season at a yet-to-be-determined high school in the state of Washington.

“He’s a great passer. That’s the most (assists) he’s had in a while. He’s capable of that every game,” added Porter, who scored 29 points off 13-of-18 shooting and grabbed 10 boards in Saturday’s rout.

Young, 6-1 out of Norman (Okla.) North High, who scored 103 points in 105 minutes in four games at last week’s EYBL event in Virginia, dished 16 assists while scoring 17 points off 6-of-9 shooting against the outmanned Michigan team. 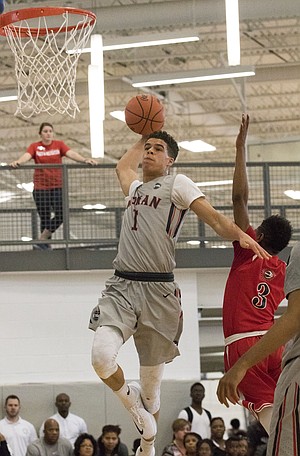 “It may be a sign. I don’t know,” the personable Young said with a smile, jokingly referring to the fact he had so many assists in Lawrence, site of one of his finalists, the KU Jayhawks. “I have great teammates. I know when I pass it to them they are going to make a play. I like giving my teammates the ball. I’m a leader. It’s something I do. When you’ve got great players on your team you’ve got to make sure everybody does well. You’ve got to be a true point guard out there.”

He showed some modesty, not taking the bait when a reporter asked him if he reminded himself of Golden State’s Steph Curry. Young hit two threes Saturday, one from downtown.

“I’m not there yet,” Young said. “I’m working to be at that level, hopefully to be as good as him, even better.”

In that quest, he noted that he works on “karate, yoga, eating right to keep my body right.”

Porter, meanwhile, hit a pair of threes from the corner and finished an assortment of vicious dunks. He ran the floor well and appears to have great court vision. In other words, like Young the real deal.

“I think my versatility, the fact I’m trying to make the game as easy as possible,” Porter said of reasons for his success. “I try to not over-dribble. I try to take what the defense gives me. That helps a lot.”

He said: “I just try to play an all-around game. I like Kevin Durant, Carmelo Anthony, Rudy Gay, big wings like that. At the end of the day I’m my own player and trying to do my own thing.”

A polite person known for exuding no attitude in interviews, Porter said “It’s definitely going to be a big move going out there (to Washington for senior season). But it’s not a lock I’ll go to Washington. I’m considering other schools on my list (including KU, Kentucky, Duke, UCLA, Missouri, Stanford and others).”

There would be several comments about these two if anybody had an ounce of faith they would attend Kansas.

Still an ounce of hope, but then again I was also hoping previous FB coaches would be successful. That balances out with still being hopeful when the USA University team was down in the middle of the second half of the championship game, and others were conceding the gold.

Right now, I am interested in KU getting the commitment from Derryck Thornton.

I went out and watch them play, yesterday! I want Young! But it's too bad he added Washington to his list!

All I can say is these guys appear they would be an outstanding fit at Kansas, not only in their style of play but also in the kind of people they are. And I think KU would be really good for continuing their development and NBA potential.

I agree re: Thornton. This year looks good with Devonte and Frank, so Thornton having to sit out a year doesn't seem too significant. Then, it becomes a decision of whether you would rather have Thornton or Young in 2017-18. They are both probably OAD's at that point, so I would be inclined to go with Thornton's experience. However, I will admit that Young may the more skilled.

We know that Porter is essentially a lock for UW, regardless of what he says, and my guess is that Young will follow suit. Not worried though, because there are a lot of fish in the sea, and Bill Self and his staff will get their share as they always do.

It would be cool to get both Thornton and Young. Devonte may have a great year and head to the League.

At 6'2" Devonte would have to have a great year to justify going early, which he might. There are a lot of 6' 2' guys that can play.